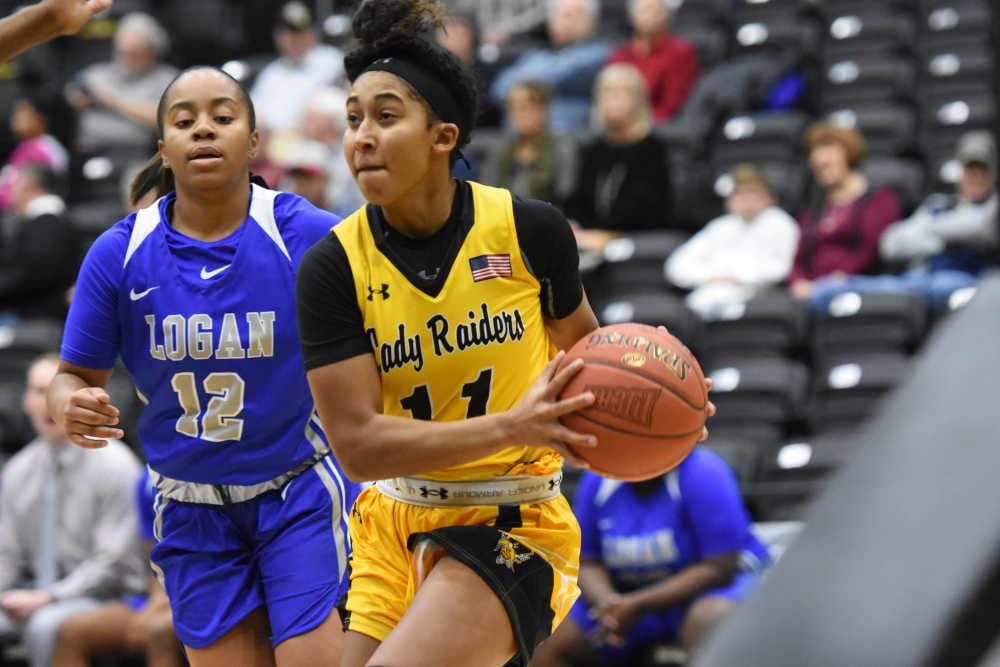 It took John A. Logan 14 minutes to score a two-pointer against Three Rivers. By that point, it was too late.

Three Rivers allowed eight total points during the first 14 minutes — a pair of 3s and a pair of free throws — to take a commanding lead early and eventually win 103-58 on Tuesday at the Libla Family Sports Complex.

The Raiders (8-2) started the game in a diamond press that fell back into a 1-3-1 zone and jumped out to a 19-3 lead after 5 minutes despite installing the defense just two days before the game.

“We did it last year some, but this year we haven’t. We just worked on it in practice the other day,” Three Rivers sophomore Katelyn South said.

In their previous matchup, which Three Rivers won by 19 points, the Raiders ran a 1-2-2 zone with their post players responsible for checking corner 3s. The Volunteers put two shooters in the corners and went 10 for 26 on 3-pointers.

With the 1-3-1 zone, guard Jordan Little was under the basket at the start of the game and bouncing from corner to corner instead of the post players. John A. Logan again took 26 3-pointers, but made half as many and shot 25% worse from the field overall.

Deanay Watson and An’Nyah Pettus each had 18 points to lead Three Rivers. Pettus also grabbed 10 rebounds in 22 minutes off the bench for her second double-double of the season and a new season-high in scoring.

“Just being able to knock down every open shot my team gave me and run as fast as I can. They threw me an overhead pass and I just made them,” Pettus said, estimating half her baskets were in transition.

Watson was 9 for 10 shooting to go with three steals, which matched Autumn Dodd and Chaylea Mosby for a team-high.

“The second time we play people with this bunch we’ll probably start mixing stuff up to keep them off balance,” Walk said.

In Three Rivers’ first home game since a Nov. 9 loss to Wabash Valley, the Raiders pressed on every dead ball until late.

“It was good having a good atmosphere for us because it’s the first one in a while. We had more than five fans in the stands watching us, so that was a good energy,” South said. “We were just fired up in the locker room before the game and I think we carried it out onto the floor.”

The Volunteers, when they did get into their offense, were 2 for 19 on 3-pointers in the first half and 5 for 11 everywhere else.

“We were packed in. We were covering everybody we could. Their shots weren’t falling and they just kept shooting it,” South said.

Three Rivers’ offense inevitably slowed after such a strong start.

The Raiders had two field goals in the final 5 minutes of the first quarter, including a 4-minute stretch that lasted into the second quarter where they didn’t make a basket. After 19 points in the first 5 minutes, they scored 27 over the next 15.

At one point in the second quarter, Dodd had back-to-back steals off the press that led to assists and layups for Watson and Mosby.

The Raiders padded their lead in the third quarter and went ahead by 30 points for the first time with a little more than a minute left in the period, and then went ahead by 40 points with 2 1/2 minutes left in the game.

Jamiyah Thomas found Mosby for a layup soon after to give the Raiders 101 points, the first time they’ve scored 100 points since the season opener against Olney Central.

The Three Rivers bench outscored John A. Logan 58-13. The Raiders were also plus-27 on points off turnovers, plus-48 on points in the paint, and plus-23 on second-chance points.

Three Rivers will next host the second part of the Region XVI Showdown. The Raiders will play Moberly Area at 7 p.m. Friday, followed by Jefferson at 5 p.m. Saturday and State Fair at 5 p.m. Sunday. In the first part of the Showdown, the Raiders lost by a point to Mineral area and beat Crowder 89-61.