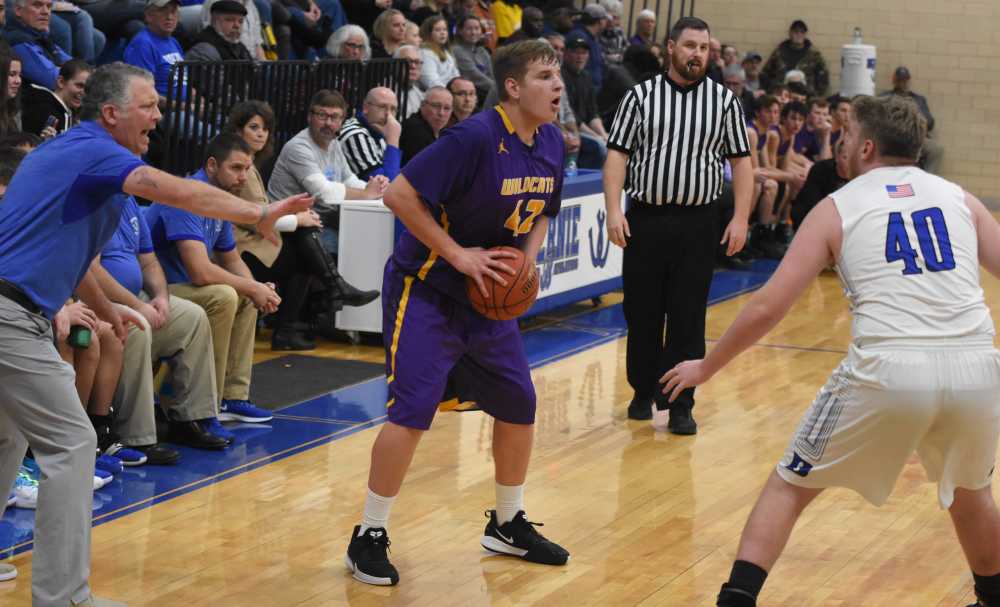 The third-seeded Mules scored 13 of the first 14 points of the game and rolled to a 71-31 victory over sixth-seeded Bloomfield in the first round of the Bernie Invitational at Bernie High School.

“We didn’t handle the pressure very (well),” Bloomfield coach Brandon Crook said of his team’s season-opening loss. “They had a lot of intensity and we didn’t match it. … They came out and jumped on us early and proceeded to jump on us the rest of the game.

“They did a good job all night of making things hard for us on offense.”

Jason Long, the first-year head coach of the Mules, said his team must play with that type of intensity to be successful.

“It’s the first game. You never know how a first game is going to go,” Long said. “We’re just trying to establish an intensity level that we feel like we need to have because of our personnel.”

The Mules sank 11 3-pointers in the victory with senior Landon Zoll making seven of them and scoring a game-high 23 points. Senior Blake Harty finished with 21 points, including one 3-pointer and a 6-for-7 performance from the foul stripe. Senior Andrew Geohagan scored 10 points in the paint.

“We need confidence,” Long said. “I need to make sure I do a good job of breeding confidence. … (This win) should be a good confidence builder going forward because things are only going to get tougher.”

Tyler Suiter scored all four of his points early, and the Mules took a 13-1 lead. Bloomfield cut their lead to seven on a driving layup and free throw by Gage McNeil and a free throw by Colton Hyslop. Dodd scored on a feed into the lane to trim Bernie’s advantage to 13-7

Both teams reached the bonus in the first quarter and the double bonus in the second of a physical first half. They combined for 37 total fouls, with Bernie committing 19. Bernie held a 12-11 advantage in free throws made.

Sixteen of Bloomfield’s 18 attempts came in the first half and 14 of Bernie’s 19 came in the opening two quarters.

The Mules stretched their lead to 21 points twice in the second quarter, but Dawson Hill made two free throws in the final minute to cut his team’s deficit to 39-22 at halftime.

Bernie used runs of 8-0 and 10-0 to take a 59-28 advantage into the fourth quarter where the running clock was in use throughout.

All 10 Bernie players received playing time and seven of them scored at least a point.

“Everybody got to play tonight and that’s good. We tell the kids if you get an opportunity, you need to get out there and play your butt off. I think they tried to do that tonight,” Long said.

Seventh-seeded Puxico gave state-ranked Neelyville a fight in the first half.

Ranked No. 10 in Class 2 of the state coaches association preseason poll, Neelyville led only 14-10 after one quarter and 30-25 after two before outscoring the Indians 36-20 in the second half. The Tigers extended their lead to 44-32 by the start of the fourth.

Jemaane Williams scored eight of team-high 20 points in the fourth quarter where the Tigers held a 22-13 scoring advantage.

Curtis Fowler added 17 points and Lane Crosswhite had 10 for Neelyville.

The fifth-seeded Tigers overcame an 8-0 deficit and upset the Royals 60-47.

Parker Watson finished with a team-high 14 points, including three 3-pointers.

The Tigers stretched their lead to 26-17 by halftime, but Twin Rivers twice cut its deficit to five points before Risco answered with a 10-0 run.

The Royals stayed in the hunt of their season opener, slicing their deficit to 46-37 by the start of the final quarter where Risco finished them off with a 9-0 run.

The Camels took control after a close first half against eighth-seeded Holcomb.

The Camels led 11-7 after one quarter and 29-19 at halftime. Campbell outscored the Hornets 22-3 in the third quarter.