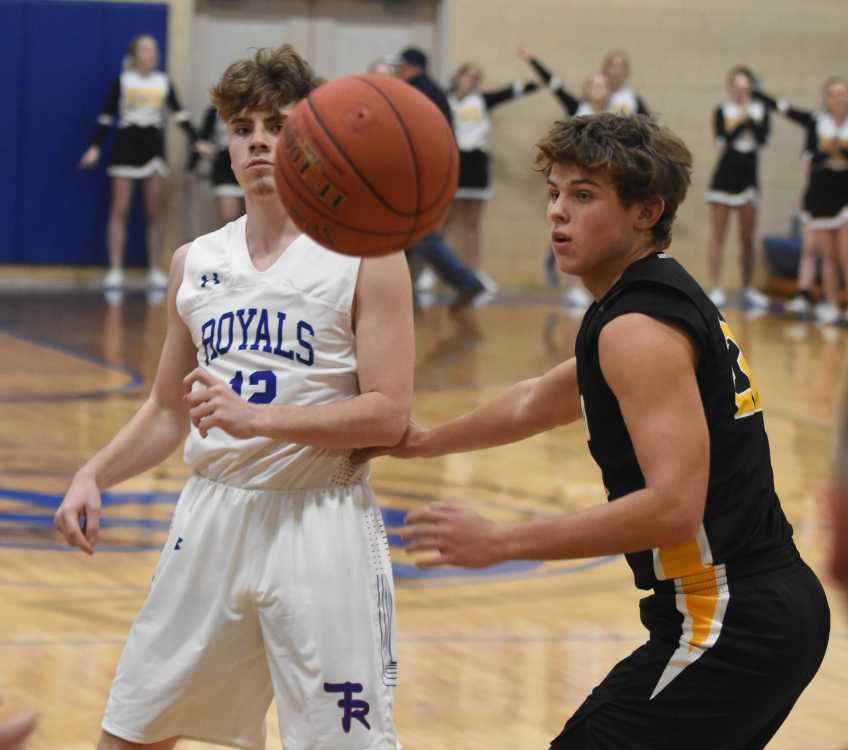 Twin Rivers’ Brent Trout passes away from a Risco defender during the third quarter Monday night in the first round of the Bernie Invitational boys basketball tournament.
DEXTER STATESMAN/Kyle Smith
Order this photo

BERNIE — Every time the fourth-seeded Twin Rivers Royals made a run, the Risco Tigers had an answer.

The fifth-seeded Tigers overcame an 8-0 deficit and upset the Royals 60-47 in the first round of the Bernie Invitational boys basketball tournament on Monday at Bernie High School.

Falling behind is nothing new for the Tigers, who trailed 7-0 against Roosevelt on Saturday at the Riverbend Classic in New Madrid.

The Royals (0-1) got a pair of baskets inside by Avery Jackson and a fast-break layup and a jump shot by Brent Trout to give Twin Rivers the early lead.

“They were exposing the inside early, so we went to the 2-3 zone and took that away a little bit,” Blankenship said. “We did a good job of rotating out on shooters. We lost (Parker Watson) a few times and he got open for some good looks.”

Watson finished with a team-high 14 points, including three 3-pointers.

“We didn’t shoot it very well in our first two games at Riverbend,” Blankenship said. “I told our guys, as long as you’re getting good looks and good shots, keep shooting. They’ll fall.”

The Royals cut their deficit to 16-15 on a 3-pointer by Watson, but Meese and Pipkin made back-to-back 3s and Hayden Ludwig sank a jumper for a 24-15 lead and the Tigers led 26-17 at halftime.

Watson made a pair of 3-pointers early in the second half, and the Royals twice cut their deficit to five points before Risco answered with a 10-0 run that included 3-pointers by Meese and Rodgers.

Twin Rivers began attacking the heart of the Tigers’ defense afterward and sliced its deficit to 46-37 by the end of the quarter. Jolby Jones and Brandon Tompkins drove inside and drew fouls. Jones went 2 for 2 from the free-throw line and Tompkins sank 3 of 4.

Tompkins scored 12 points, all in the second half.

After Tompkins’ putback cut Risco’s lead to 46-39 at the start of the fourth quarter, the Tigers scored nine straight points, putting the game out of Twin Rivers’ reach.

“I think playing a couple of games in the Riverbend Classic really helped us,” Blankenship said. “We’ve got two games under our belts already. That game experience, you can’t put a price on that.”

Before beating Roosevelt, the Tigers lost 80-41 to Cairo, Illinois on Friday.