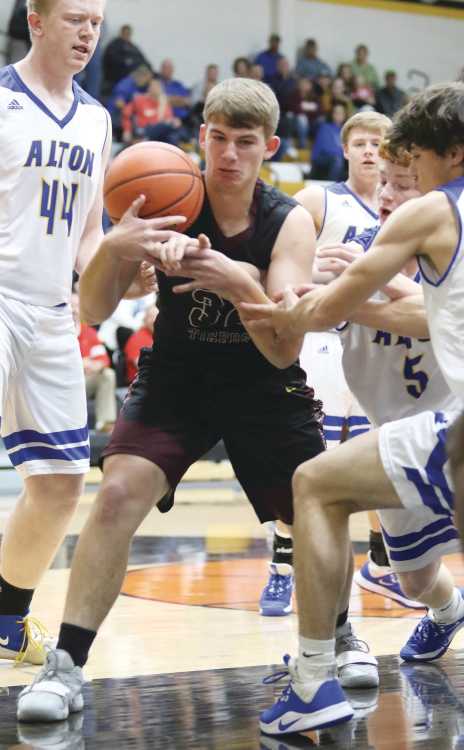 He was sure the Tigers’ first opponent took note.

Alton ended the third quarter with a 9-2 spurt and out-rebounded the Tigers by 19 to hand Neelyville a season-opening 64-49 loss Friday in the 15th annual Current River Challenge.

“We just got dominated on the boards,” Morton said. “We weren’t blocking out. We weren’t ready for that. They just severely outplayed us in that aspect of the game.”

There were five ties and eight lead changes before the Comets took off. Alton senior Colby Kernoodle got consecutive putbacks following Neelyville turnovers and junior Jed Montgomery sank a 3 just before the horn to cap a 9-2 run.

Trailing 43-37 to start the fourth, the Tigers scored first to get within four but Alton quickly answered. A technical foul called on a Neelyville player after the basket led to a six-point possession for Alton for a 10-point lead with four minutes left. 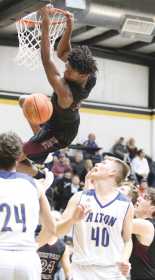 “I think Alton outplayed us tonight,” Morton said. “They played well and we kind of looked like we’re still trying to figure things out.”

Curtis Fowler scored 18 points to go with eight rebounds but the senior picked up his second foul in the first quarter and his third near the end of the third.

Austin Ennis added 10 points for the Tigers while JD Burton had six off the bench.

Alton finished with a 46-27 rebounding advantage and scored a dozen second-chance points.

“When the whole team is not making an effort as a unit to go get a rebound and when we’re counting on somebody else to get it done, then you’re not going to win that contest,” Morton said.

Neelyville, which reached the district final in each of the last two seasons, edged Alton by a point in the district quarterfinal last season.

The Tigers were ranked No. 10 in Class 2 by the state coaches association in its preseason poll.

“It’s been a talking point the past couple of days and postgame tonight, we talked about it a little bit,” Morton said. “When you see something like that it shouldn’t mean much to you but in the back of your mind it does.”

The Tigers are the No. 2 seed in the Bernie Invitational, which starts Monday. They will face Puxico at 7 p.m. in the quarterfinal.

“First (game) of the year, you’re always going to learn what you need to fix,” Morton said. “There’s always a lot of things we can take away from these first games. We’re going to hit the practice gym hard and get to work on what we need to work on.”

Connor Jackson scored 17 of his game-high 24 points in the first quarter as the Van Buren senior matched Valley’s first-half scoring.

The Bulldogs led 29-9 after one quarter and held Valley to 19 first-half points.

The Bulldogs will face Doniphan at 7:30 p.m. Saturday after the event resumes at 10:30 a.m. with the first of seven games.

The Bobcats had five players reach double figures in scoring in a win over the Dons.

Evan Bartels scored a game-high 22 points off the bench with all but six coming in the second half after Delta built a 15-point halftime lead. Jon Bond scored all 13 of his points in the first half while Eric Berry added 11 and Colby Crader chipped in 10. Hunter Ourth added 11 points off the bench.

Levi Rawlings scored 14 points and Kameron Burton added 11 for the Dons, who trailed 21-13 after one quarter. 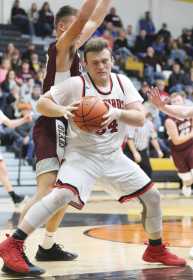 Locked in a tight battle for three quarters, the Redbirds couldn’t overcome an 11-4 run to start the fourth. Willow Springs sank 10 of 14 foul shots over the final three-plus minutes to pull away after the Redbirds got within a bucket.

“We talked about any time we don’t get a bucket on our end we got to buckle down on the other end and get a stop,” East Carter coach Jordan Penn said.

Dalton Rudd led the Redbirds with 24 points while Preston Golden added 12 and Kyren West scored eight of his 10 points in the fourth quarter.

“Offensive rebounds killed us all night long,” Penn said. “We knew they were a physical team. … That was one of our keys to keep them off the glass and we just didn’t get it done.”

The Bears trailed by nine after one quarter and had another slow start to the second half in a loss Friday.

Winona sank seven 3-pointers, including five from sophomore Dixon McCade who scored 29 to lead the Wildcats.

Tristan Duncan scored 15 of his 24 points in the opening quarter to lead Summersville in scoring.