Since she was little, Poplar Bluff's Kiley Bess was driven to compete 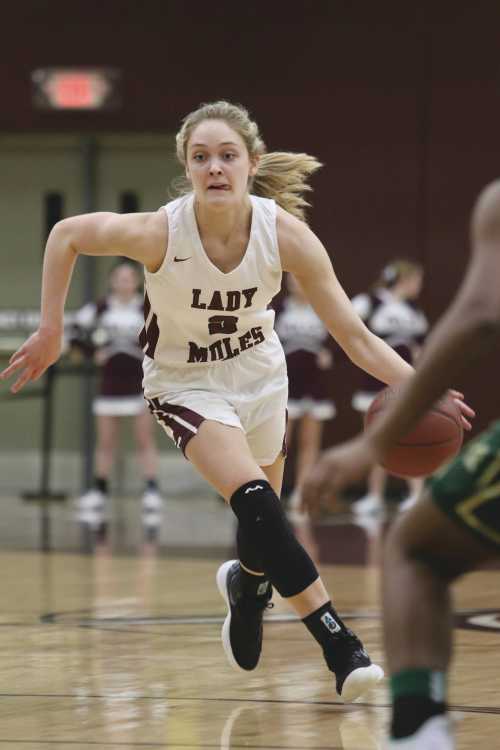 The namesakes of the Bess Activity Center at Three Rivers College are no relation to Kiley Bess. Her father and grandfather worked there, so naturally she was there a lot.

Now about to start her senior basketball season at Poplar Bluff High School, Kiley recently signed her National Letter of Intent to play in a bigger arena at Saint Louis University. 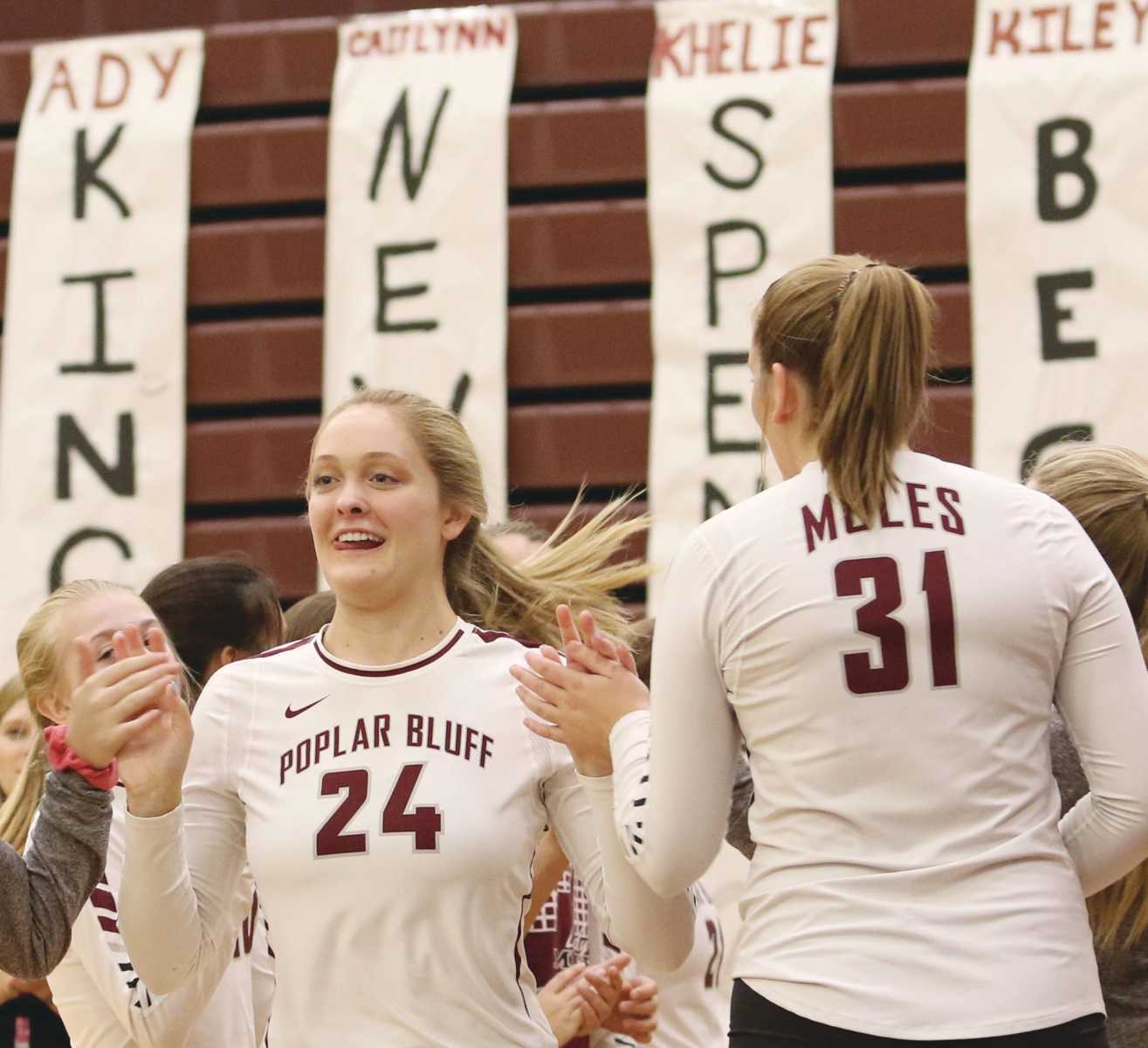 In this Oct. 1, 2019, file photo, Kiley Bess is introduced during volleyball senior night at the Senior High Gym in Poplar Bluff.

She already holds the Poplar Bluff girls program record for points in a career, starting this season with 1,686 points, and set a school record as a sophomore with a 50-point game. Bess, who can become the schoolĺs second 2,000-point scorer this season, is looking to add some different accomplishments to her stellar resume with her teammates.

The Mules, who host Roosevelt tonight to start their season, return all five starters from a team that reached the district final for a third straight year.

Basketball, however, was not Kileyĺs first instinct hanging out in the gym.

ôI first thought I was going to be a cheerleader and then I donĺt know what happened,ö Kiley said. ôI just started practicing and fell in love.ö

In this January 2017 file photo, Poplar Bluff's Kiley Bess, then a freshman, shoots for the Mules at the Senior High Gym in Poplar Bluff.

Itĺs not like she had much of a choice, a basketball is likely on the Bess family crest.

Her mom and dad both played in high school, as did her older brother and, of course, her grandfather has the most wins of any college basketball coach.

ôMy grandpa has just been such a good influence on my life. Making me the greatest basketball player I can be and I just give him and my dad all the credit.ö

ôSheĺs just one of those people that, to this day, she likes to shoot,ö Gene said. ôSo she has a love for the game.ö

Kacey Bess, Kileyĺs mother, recalls someone saying that of course Kiley would be good at basketball given the fact that she has her own gym.

ôThat isnĺt correct,ö Kacey said. ôYouĺve got to have the desire to go to the gym. In Poplar Bluff, thereĺs plenty of gyms that if a kid wants to go, they can go.ö

Kiley always wanted to go to the gym and never cut corners in it, her brother Kolby said.

If Kiley was told to make 10 free throws in a row, she would not stop until she did just that.

When the Bess kids couldnĺt get to the Bess Activity Center, they made their own gym in the familyĺs basement. It started with a Nerf basketball and net and then a goal that was seven feet tall.

Said Kiley, ôHe never takes it easy on me. Heĺs not the person to let me win, so heĺs given me that aggressive mentality.ö

Kolby does not take credit for that.

ôWe were so competitive that nobody wanted to lose,ö Kolby said.

That wasnĺt just in basketball.

Brian Bess scored 623 career points for the Mules and set a season assist record of 256 during the 1989 season. He went on to play for the Raiders.

Kacey Bess, who attended Lesterville High School where she was a cheerleader and valedictorian, played volleyball at Three Rivers.

ô(Kacey) coached her for Upward basketball when (Kiley) was in kindergarten,ö Brian recalls. ôShe got to play in the first and second grade league. Kiley dominated. They had to tell her to stop, donĺt score every time down.ö

In the first grade, Kiley was moved up to the third and fourth grade league.

ôWe had to go to travel ball because she dominated the church league,ö Brian said.

At the age of 6, Kiley started attending the Gene Bess Basketball Camp when the youngest players were three years older.

ôI would go to grandpaĺs camps and play the boys,ö Kiley said. ôAnd I just migrate to be with the A group so I had to grow up fast on the game.

ôI had a lot to learn and playing an older group really shows me what I had to do to improve.ö

Kacey recalls when Gene first started teaching Kiley how to shoot she had to stay close to the rim until she perfected that shot.

Last season as a junior, Kiley was the top free-throw shooter in the SEMO Conference, also earning the scoring award, and the co-player of the year. She sank 82.95% of her foul shots and averaged 26.85 points in conference play.

As a freshman, Bess scored 20 points in her first career varsity game and had 10 more games of 20 or more points.

She also had 14 rebounds and six steals while sinking two foul shots to force overtime in an 80-76 Poplar Bluff win.

Bess topped Mary Kalichĺs school record of 45 points in a game and got nearly halfway to Kalichĺs career scoring mark of 1,635.

Bess needed 51 games to reach 1,000 points and passed Kalich in the final regular season game of her junior year.

Bess also finished with the most career kills in volleyball after leading the Mules with 210 this season to put her over 600.

Mules volleyball coach Aimee Simmers said Bess was the type of player she could trust on the court at all times.

ôI literally could put her anywhere without blinking an eye,ö Simmers said. ôThe adjustment she had on the court was impeccable.ö

Bess said she started playing volleyball to help with her jumping ability. It was also a way to be with her friends when basketball season ended.

Bess also played softball, soccer and was a swimmer. She set a conference record for the 8-under age division in the 25-yard butterfly of 16.75 seconds.

ôKiley has one of the most competitive attitudes I have ever coached,ö Simmers said. ôAfter we had a rough weekend, Kiley was the first to say she was doing whatever it would take to win.

Pattillo, now in his sixth year as the girls coach, also coached the only basketball player to score 2,000 points in school history, Tyler Hansbrough, during his nine seasons as boys coach.

ôI got to coach quite a few competitors as far as that goes, but you know sheĺs as good as any,ö Pattillo said.

ôI want to win,ö she said. ôBut I have fun doing it. ů I really enjoy playing and now that I have the recruiting process done, I can just focus on my love.ö

Bess made a commitment to play at Saint Louis University after the Mules got an invitation to play there this summer as a team.

Bess said she went to SLU for summer camps when she was younger and was impressed with the academics and coaching staff.

Gene rarely misses Kileyĺs games and says sheĺs his favorite player to watch at any level.

In another twist of basketball fate, Pattilloĺs father, Roger, was an assistant basketball coach for Gene at Three Rivers.

ôShe was blessed with John David,ö Gene said. ôHis daddy coached with me and now I get to watch his son coach my granddaughter.ö