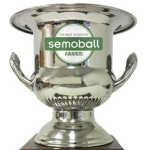 The race for the 2016 Semoball Cup is complete.

The Semoball Cup will be presented during the Semoball Awards on July 9 to the school with the most successful season based on a formula that takes into account the combined winning percentage of all sports teams plus bonus points for advancing in postseason play for both teams and individuals. The bonus points are divided by the number of teams a school fields, thus making it possible for small and large schools to compete together.

Our finalists this year are (in alphabetical order):

Following the fall season, Bernie led the standings after placing third in volleyball.

Gideon was the leader after the winter sports after finishing third in boys basketball and earning a district title in volleyball.

Westwood Baptist of Poplar Bluff won a state title in girls basketball and finished second in boys soccer. The Eagles, however, do not compete in MSHSAA playoffs so they do not get bonus points for winning a district title and advancing to the state tournament. Still, Westwood Baptist cracked the top 10 for the first time.

So who is missing and why?

Jackson finished 11th this year by just under a point after finishing fourth at state in girls cross country and earning 12 all-state honors in individial sports. The Indians won three district titles and were second in eight other sports while finishing with a .623 winning percentage.

Van Buren had the best winning percentage for a program at .709, going a combined 100-41, placing ninth in girls cross country while the boys were 11th.

Neelyville and Naylor both finished second at state in girls basketball and Portageville was third in fall softball but that was the only district title those schools earned this season.

Dexter had an individual champion, Poplar Bluff had the most all-state honors with 13, won four district titles, one less than Notre Dame, and was second in four other sports but only one team reached the quarterfinals and those four second-place finishes at district left the Mules short of the top 10.

Perryville finished second in boys soccer but that was the only district title and the program had a .587 winning percentage. Cape Central, Chaffee and Scott City also reached the final four this year but had overall winning percentage under .500 while Sikeston, fourth in boys basketball, finished at .506.

The final standings will be released July 9.