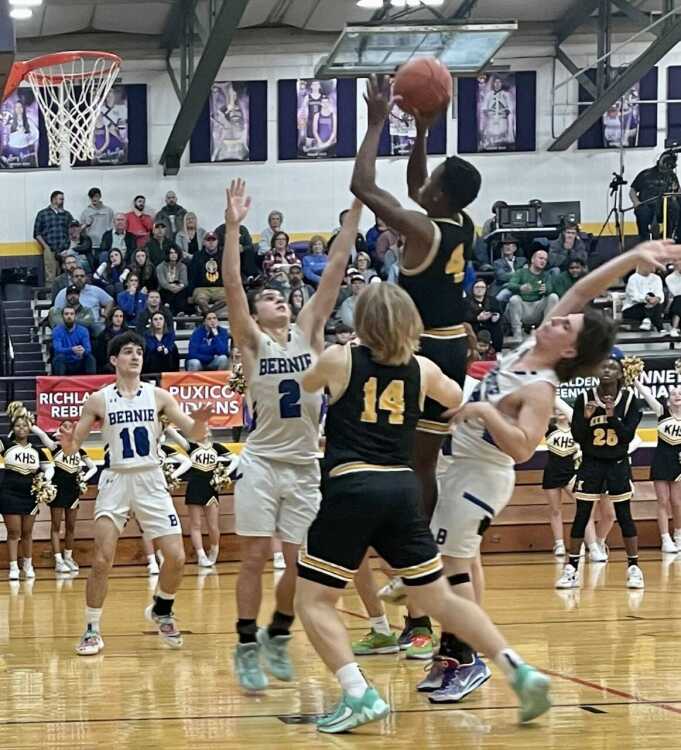 Bernie's Johnson, a 5'9" guard, scored a staggering 44 points during the game in an overwhelming exhibition of athletic skill and finesse.

Billings prior to the game said his team needed to shut down Johnson in particular and limit fouls if there was any hope at all of an upset.

"We need to try to not break the all-time Bloomfield foul record and take Tristan Johnson offline," Billings said. "We need to see if we can handle the ball."

"I thought we had a chance to begin with," Johnson said. "We had to get Bernie out of their comfort zone.

"Our man-to-man defense was pretty solid," the coach added. "We're a team searching for an identity. We run and gun. For a team searching the way we are, against a state-proven program year-to-year, I think tonight's game says a lot about our team and our philosophy."

With just 42 seconds left in regulation play and with Johnson firing three-point after three-point missiles, Kennett led by just one goal, 85-83. Kennett drew fouls with 8.9 seconds remaining and sank free-throws to pull ahead for the win.

Despite the upset, Bernie's Coach Long couldn't be more proud of his team and its prowess Wednesday.

"This was an unfathomable, phenomenal effort on the part of our guys," Long said. "It says a lot about our kids.”

"They battled their butts off," the coach gleamed. "We were out-sized and out-manned. Kennett's depth is impressive. I told our team that there's no reason to be down. We have nothing to hang our heads over. It's easy to understand why I'm so happy. Were there things we could have done better? Yes. And we'll continue to try to do better. Kennett played a great game tonight."

Kennett Asst. Coach John Patton said the high point for him was the fact that the Indians did manage to rein in fouls, more so than Tuesday's game against a fierce Holcomb squad.

"We were plagued by fouls," Patton remarked. "Tonight we were able to guard without fouling. Turnovers were not as bad as they were Tuesday," he continued. "Dyson Watson played a good game. We started five sophomores. Our kids grew up a little tonight. The size of this tournament is a good experience for them. It was a packed house. Thursday will be just as packed with Malden playing Dexter. And even more packed Friday for the finals. The attendance is just great. Bernie always fields a fantastic team. We held it together and we couldn't ask much more from our kids."

"It was a good experience for us," Henfling said. "I think it was the biggest crowd ever for us.

"These were good teams," he emphasized. "Good teams and a good close game. Bernie is tough to beat down the stretch. This is a big deal for us."

Kennett's season record improved to 5-4 and advanced the Indians to play Doniphan Thursday at 8:30 p.m. at Bloomfield High School.