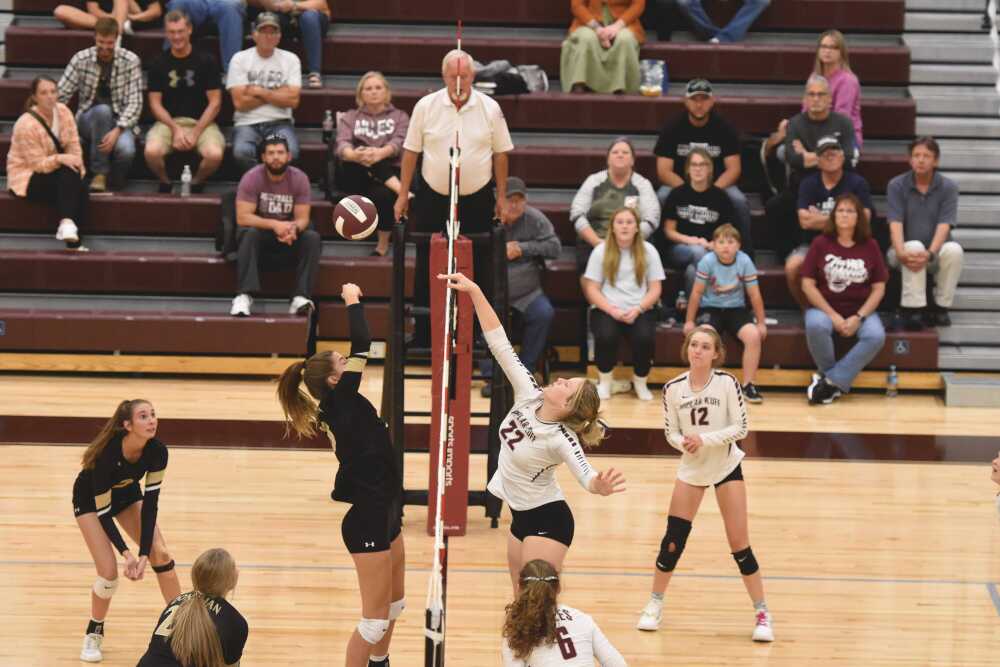 Poplar Bluff's Ireland Gowen tips the ball over the net while Doniphan's Kanzie Redus tries to block it on Monday, Oct. 3, 2022 in Poplar Bluff.
DAR/Robert Augsdorfer

"It's great to get the win on senior night," Poplar Bluff coach Aimie Parkin said. "But Doniphan really made us work for it."

Prior to the varsity game, the Mules honored their five seniors, Olivia Carda-Smith, Sydney Kramer, Abigail Lawrinenko, Lily Johnson and River Rowland. Much like previous senior classes over the last couple of years, this group had to go through their high school career through COVID, with Rowland noting that her favorite volleyball memory was the bus driver being the only fan at a tournament in Bernie during the 2020 season.

"These girls have been through a lot," Parkin said. "Obviously they had to go through COVID and we didn't know if we would be able to play a full season that year."

For Doniphan, the recent struggles for the Donettes continued as they've only won once since Sept. 6.

"We're in a bit of a slump right now," Doniphan coach Savannah Moe said. "We're not mentally there and we haven't been able to get over the hump lately."

Despite going down in the first set, Doniphan (4-11) was able to put up a fight in the second set starting off with a 6-1 run, but the Mules were able to bounce back and tie it up at 16 before ending the second set up by five points to take a 2-0 lead in the match.

"Starting off we had so much energy in the first set, it kind of tapered off a little bit," Parkin said. "We struggled a little bit in that comeback but we were able to pull through."

In the third set, Poplar Bluff (7-14-1) took a 22-12 lead, but had a little trouble putting the match away with some mental errors giving Doniphan five free points, but the Mules were able to get those last three points to complete the sweep.

Both teams will have a tough test up next as Doniphan will be playing at Dexter on Tuesday and the Mules will also play the Bearcats on Thursday.

"We've got a grueling schedule ahead," Moe said. "We'll be playing at least three games a week up until the district tournament."

Poplar Bluff will also have the Jackson Invitational Tournament this weekend.