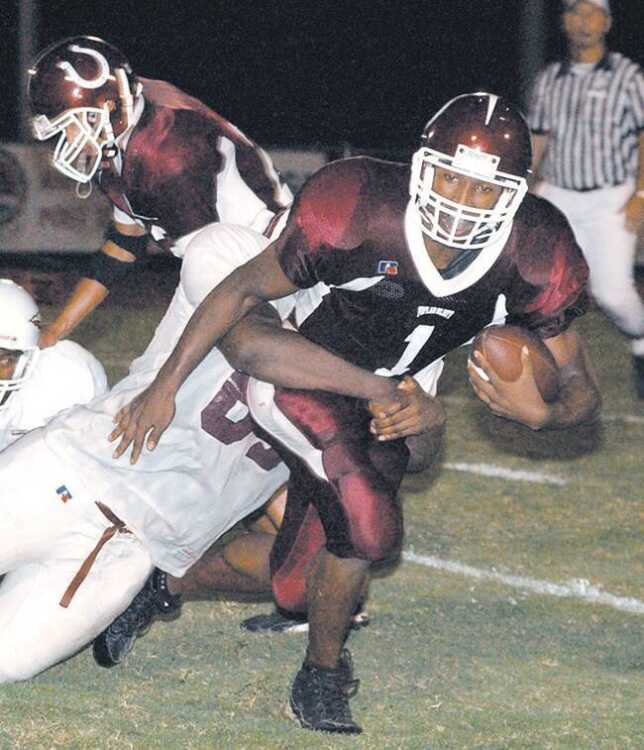 Poplar Bluff's Tony Webb (1) sheds a tackle during a game against Blytheville (Ark.) at Morrow Stadium in Sept. 2002. Webb was an all-state football and basketball player for the Mules.
DAR FILE

A pair of consecutive state championship teams and the only Poplar Bluff High School athlete to earn all-state honors in both football and basketball will join a state champion sprinter in the Poplar Bluff Sports Hall of Fame this fall.

Tony Webb, Clayton Liles and the Mules 1995 and ’96 golf teams will be honored at the 35th induction banquet, the Hall of Fame’s Board of Directors announced.

The ceremony will be held Thursday, Oct. 6, at the Black River Coliseum and the inductees will also be honored during halftime of the Mules football homecoming game against Farmington the following night. 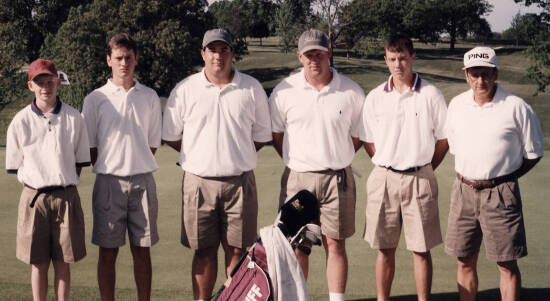 The Mules 1995-96 golf teams will join eight other teams honored by the Sports Hall of Fame, including the 1980, ’81 and ’88 state championship golf teams.

Poplar Bluff’s golf program was inducted into the Missouri Sports Hall of Fame in 2021.

“Throughout the state of Missouri, Poplar Bluff is a heralded school when it comes to golf,” said Chris Rushin, vice president of the Sports Hall of Fame’s Board of Directors.

“Winning back to back state championships is almost unheard of and these were two of the most dominant teams in the history of state competition.” 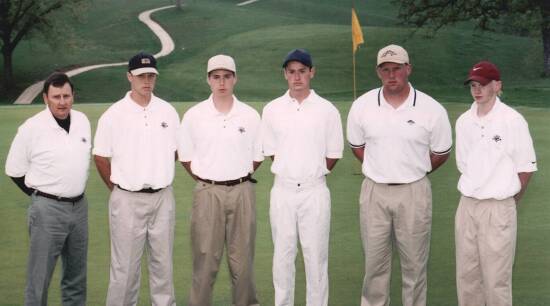 Among the champions in the largest class, Poplar Bluff and Rockhurst are the only schools to win in consecutive years more than once and only seven other schools have defended a title.

The 1995 Mules were coming off a runner-up finish at state, losing to two-time defending champion St. Joseph Central by a stroke. Led by Colby Robertson and Derek Rahlmann, who earned all-state honors, the Mules won the team title by seven shots with Josh McCarty, Andy McCullem and Chris Love.

In 1996, the Mules won by nine shots when play was stopped due to rain in the second round. Robertson earned medalist honors for a second time and a fourth all-state medal, McCulleum tied for ninth with Love, McCarty and Chris Henthorne playing for the Mules.

Both teams were coached by Bill Caputo, a 2000 inductee, while Robertson was inducted in 2013.

Webb and Liles will bring the total number of individuals honored by the Sports Hall of Fame to 98.

“Over the past 35 to 40 years, you can make the argument that there has not been a more talented young man come through the halls of Poplar Bluff High School than Tony Webb,” Rushin said. “The beautiful part about Tony is that for all the accolades and all the talents he has athletically, he’s a better father, husband, Christian and citizen of Poplar Bluff.”

Webb, a 2003 graduate of PBHS, set records in both football and basketball, earning all-state honors in both sports before playing basketball collegiately.

Webb broke a 44-year-old career scoring record in basketball, finishing with 1,151 points. He was a two-time all-state selection as a junior and senior, helping the Mules reach the final four in 2003 when he was a team captain.

In college, Webb played at Three Rivers College and Mineral Area College, where he was an all-region and All-American, before finishing his career at Missouri Southern University.

Currently, he coaches an AAU basketball program, the SEMO Bulls, and lives in Poplar Bluff.

Liles, who died in 2017 at age 91, enlisted in the U.S. Army in 1944 following his junior year at PBHS when he won the 100-yard title and helped the Mules track team place fifth at state.

“We’re very proud to finally realize the accomplishments of Clayton Liles,” Rushin said. “Here’s a gentleman that was a three-year letterman, won the state championship his junior year and probably would have medaled his senior year. But his commitment to his family and his country took precedence and he opted to go join the armed forces and defend the United States of America.

“He’s a prime example of why they are called the Greatest Generation.”

As a junior, Liles was the team’s captain as the Mules again went unbeaten before heading to Columbia and the state meet. There, he won the 100 in 10.3 seconds and placed second in the 220.

Poplar Bluff finished fifth, the best showing by the Mules since placing third in 1934.

Liles, who was the fifth PBHS athlete to earn multiple all-state honors, joins eight other state champions in track already in the Sports Hall of Fame, which started in 1981.

Tickets for the banquet will go on sale Monday, Aug. 1, at the Coliseum and Poplar Bluff Greater Area Chamber of Commerce. Cost is $20 and includes a dinner.