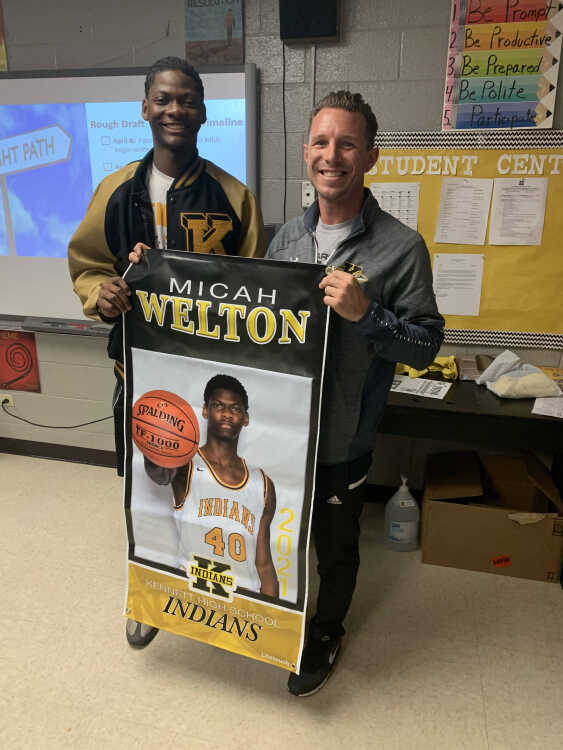 KENNETT, Mo.- The Kennett Indians basketball program has been looking for a head coach since the beginning of the off-season. Corbin Clark, the former coach of the Indians, tenured his resignation in March to accept a coaching job in Gosnell, Arkansas, coaching the men's basketball program.

It did not take long to find the coach that Kennett wanted to lead their program. In fact, their new head coach was already in the building last year and was also already on the bench as a part of Clark's staff in 2022.

"I was raised right here in Kennett, Missouri," said Billings. "The very first baskets I ever made were in that old Armory. It may sound crazy, but Basketball is the very first thing in my entire life that I can remember falling in love with. By the time I was in 3rd or 4th grade I was completely obsessed.

I am an extremist to the core. I’ve never understood why anyone would want to surf a three-foot wave in Florida when there are 30-foot monsters in Maui, so I moved to Hawaii and spent a year trying not to drown. After a few inspiring karaoke experiences, I picked up a guitar and moved to Nashville back in 2009 where I spent the next decade grinding and eventually was able to travel the world as a signed national recording artist."

Everyone in the community knows who coach Billings is, as he has played basketball at several high levels throughout his life.

"I played on some good teams here with some really good players and eventually accepted a basketball scholarship to play up at Missouri Baptist University in St. Louis, where I was a three-year starting point guard and team captain of a top 10 Nationally Ranked Team," stressed Noll Billings. "We won Conference my junior and senior years, which at the time included some elite teams - Mckendree University, Lindenwood University, and Columbia College. A pretty cool side note, we went on a 15-game win streak second-semester and on through the National Tournament in 2005 featuring not one, but two point guards from the bootheel. Myself and Eric Hubbard, from Caruthersville, which just goes to show you how good basketball is in our area."

Coach Billings started his coaching career in 2007 returning back to Missouri Baptist University as a Head Strength Coach & Assistant Men’s Basketball Coach under his former Coach Tony Tompkins. So why would he return back to Kennett? Well, Kennett is home.

"It’s only Kennett for me... This town and the friends I have here have been my saving grace more than once in my lifetime," said Billings. "I’ve always known I could find something real here and recharge my batteries. I could honestly spend the rest of my life giving back to this community and I’d still be in the red. I believe that High School Coaches hold the toughest and most influential spot of all the Coaches that an athlete will encounter. I can’t think of a more impactful position, and I am honored and excited to be in it."

Billings has an expectation for the Indians basketball program, and where it should be in 5-10 years. He believes he can bring this program where it should be, among the top like other notable programs in the area.

"I see this program down the road becoming one of the many powerhouse programs that represent The Bootheel in the State Tournament each year," stressed Noll Billings. "Nothing against other area sports, but there isn’t anything even close to the consistent level of dominance that Southeast Missouri Basketball teams have been imposed on the rest of the state historically.

Billings is wanting his teams to play a certain way.

"I have full confidence in those boys to help me change the culture of our basketball program," praised Billings. "Whether we win 3 games or 30, we are going to be dogs... and RUN BABY RUN."

It seems as if Billings has the right idea of how to bring back competitive bootheel basketball to Kennett. The fans should love him as a coach, and in their community.