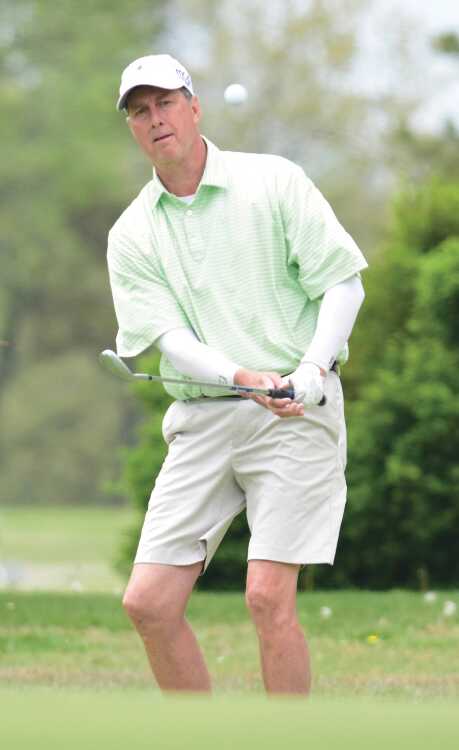 Bobby Godwin of Poplar Bluff chips onto the 11th green during the second round of the 76th Tom Hoover Ozark Invitational on Sunday, April 24, 2022, at Westwood Hills Country Club in Poplar Bluff, Mo.
DAR/Brian Rosener

A windy Westwood Hills Country Club made for a long weekend during the 76th Tom Hoover Ozark Invitational.

Bobby Godwin held on to win the Senior Division title by two shots over three players Sunday with a two-day total of 4-over-par 146.

“I played 27 good holes then I kind of had a meltdown the last nine,” Godwin said of his 2-under 69 first round before playing the front 9 even-par Sunday.

Godwin won his second Senior title after winning in 2020 when the tournament was postponed to September due to COVID-19. He’s one of three players to win both divisions since the Senior Division was added in 2009.

Godwin held a three-shot lead heading into the final round but opened with a bogey. He got back to 2-under with a birdie on No. 7 but ran into trouble with three bogeys in four holes to start the back 9.

On Saturday, he played a bogey-free back 9 at 3-under that started with a chip-in birdie on No. 11.

Four-time champion Rob Long returned to the tournament, playing in the Senior Division.

“This course has been real good to me and that was in my younger days,” Long said. “People here have been so good to me that’s the reason I’m back. I can’t compete up here, I’m too old, had too many birthdays.”

Chandler won the event and finished the Invitational tied for sixth at 3-over 145, his third straight top-12 finish.

“So good to see him,” Long said of Chandler. “I’ve known him since he was a baby and he grew up. Haven’t seen him in 15 years.

“I’m so impressed with what he’s done to his golf game.”

The three toughest holes for the weekend both featured tee shots into the wind.

The par-3 10th gave up just five birdies and the fewest pars while players managed just nine birdies on the par-4 first hole along with 44 double-bogeys or worse. The dog-leg 13th ranked third with only six birdies.

No. 11, traditionally one of the toughest holes at Westwood Hills ranked fourth while No. 5 was fifth.

The par-5 ninth had the lowest scoring average in relation to par with players picking up seven eagles. No. 18, another par-5, gave up five eagles and ranked second easiest hole.

The tournament is presented by Michelob Ultra.