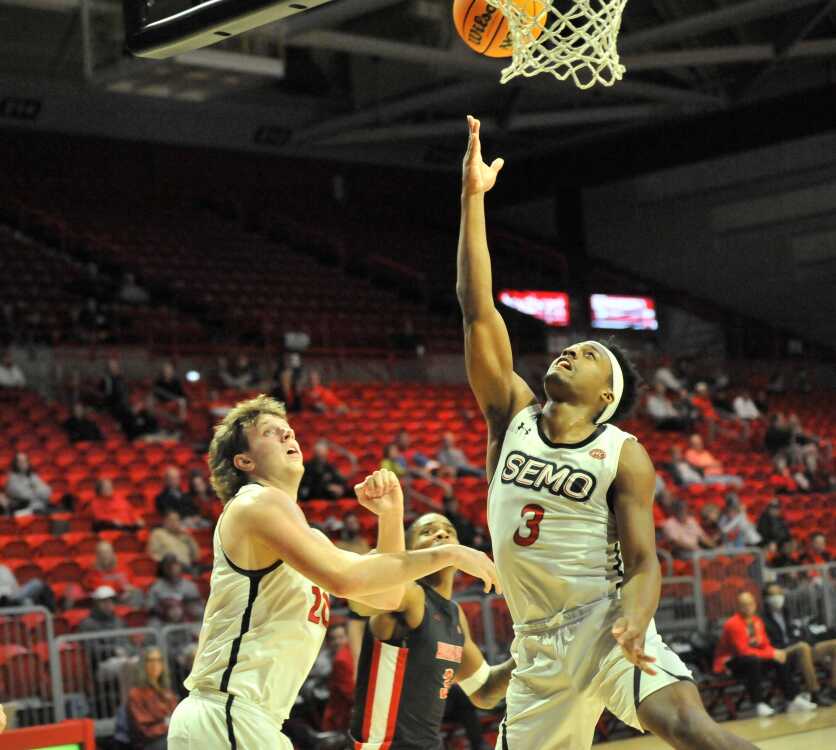 Since the arrival of Eric Reed Jr. in Cape Girardeau prior to the 2020-21 season, the followers of the Southeast Missouri State men’s basketball program have come to learn that they don’t have to worry about the shooting of junior guard from Baton Rouge. However, after watching his offensive performances in December, there was reason for some concern.

Reed Jr. returned to his proficient ways on Saturday and exploded for a career-best 34 points in leading the Redhawks (6-9, 1-1 Ohio Valley Conference) to a 98-79 thrashing of Austin Peay (4-8, 0-2) at the Show Me Center.

“I’m very pleased with how we played,” second-year SEMO coach Brad Korn said following the win. “When you make 17 (3-pointers), everything seems to go well.”

The victory was SEMO’s first since Dec. 8 (a home win against Evansville) and snapped a five-game losing streak. It was the Redhawks’ most impressive effort since perhaps the season-opening win at Missouri State.

“I’m pleased that we played with the correct intensity,” Korn continued, “the attention to detail and discipline that you have to have if you are going to compete and put yourself in the upper half of the league.”

The Redhawks exploded on the Governors from the opening tip.

SEMO scored the game’s initial eight points and a 3-pointer from Reed Jr. just 5:29 into the game put his team up 17-3.

It was the first of seven 3-pointers in 11 attempts made by Reed Jr.

From late November until recently, Reed Jr. endured a rare slump in which he missed 28 of 38 attempts over a six-game stretch.

“I had to remind myself that all shooters go through slumps,” Reed Jr. said. “I stayed in the gym during our four-day break. I talked to my family and just kind of rejuvenated and that led to the night that I had tonight.”

Reed Jr. began to snap out of the skid on Thursday at Murray State, in which he hit 8 of 14 shots (4 of 9 from long range) for 20 points. That mojo continued into Saturday, for the player, who shot 53.3 percent overall in his first season as a Redhawk last year and 48.5 percent from 3.

“I think he relaxed, which was the best thing for (Reed Jr.) to do,” Korn said of the recent slump. “He needed to trust his shot-making ability.”

SEMO led by as many as 17 in the opening half and was able to withstand a second-half rally by Austin Peay, which pulled the visitors to within six points (45-39) with nearly 18 minutes left in the game. It was the type of run that had often done in the Redhawks this season.

Korn said he and his coaching staff made some adjustments in recent practices that perhaps have helped his team stay focused through difficult stretches like that.

“There were things that we needed to get done and addressed within our team,” Korn said, “and in our practices so we could finish the game. When (Austin Peay) cut the lead to six, we lose that game a week ago.”

At that critical juncture, Reed scored seven straight points (four from the free-throw line) in less than a minute to stretch the lead back to 11 (52-41).

“It was our energy,” Reed Jr. said of the positive day for his team, as well as himself. “Coming off a loss against Murray State (106-81), and how we lost, we had no other option but to jump out on the next opponent.

“I’m hoping that carries over to Belmont when we play next.”

It was a guard’s day on Saturday, as freshman Phillip Russell scored 20 points (on 5 of 7 3-point shooting), while sophomore DQ Nicholas added 14 points.

Freshman forward Dylan Branson passed out a team-best six assists, while Reed Jr. was nearby with five.