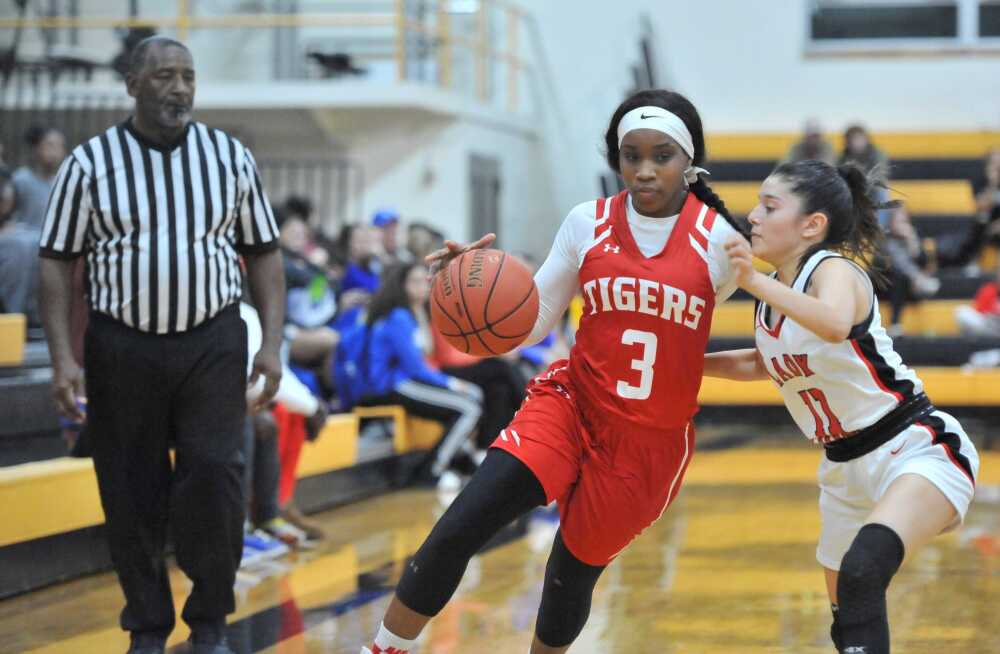 Caruthersville senior Stevianna Rodgers drives to the basket against the defense of Senath-Hornersville senior Alondra Castillo during the Al Jackson Classic at Hayti on Wednesday.
Tom Davis ~ Tdavis@semoball.com

Hickory High School coach Norman Dale, played by Gene Hackman, had to navigate a long season with just eight players, while Grooms is facing the same plight this year.

“It’s tough, especially when we’re in foul trouble,” Grooms said following her team’s dramatic 57-55 win over Senath-Hornersville on Wednesday at the Al Jackson Classic at Hayti.

The Tigers (1-1) rallied in the final two minutes with some strong defense, as well as key plays by her seniors (Stevianna Rodgers, Laticia Hamilton, and Frankel Williams) down the stretch to prevail and move on to today’s third-place game against Portageville, which beat South Pemiscot 62-30 on Wednesday.

The Bulldogs topped the Tigers 58-28 on Monday to open the tournament.

Hamilton scored nine first-quarter points, as Caruthersville raced out to a 15-10 early lead. However, the Lions (0-2) exploded for 24 points in the second quarter, as they got offense from six different players, and led 34-32 at the break.

“We are good defenders when we want to be,” Senath-Hornersville coach Nicki Pierce said. “We move the ball really well on offense.”

The Lions’ momentum continued into the third quarter, as junior Accountess Lewis put in six of her nine points on the night during that period.

Senath-Hornersville led 50-43 early in the fourth quarter, but then the Caruthersville defense stiffened, and the Lions’ offense struggled.

Caruthersville, who spent its fourth-quarter timeouts massaging cramps out of their player’s legs due to fatigue, outscored the Lions 14-5 and were aggressive enough to get to the free-throw line 11 times in the final period.

“They worked really well together,” Grooms said of her team’s play. “They communicated with one another and overcame the obstacles.”

Senath-Hornersville sophomore Jada Burlison hit her third 3-point shot of the game with 1:49 remaining to put her team ahead 55-52. However, Rodgers answered with a floater down the lane to trim the Tigers’ deficit to 55-54 just seconds later.

With 23.5 seconds remaining, Hamilton hit a free throw to tie the game at 55, while Williams pulled down a missed free throw and drew a foul, which allowed her to put her team ahead 57-55.

“My seniors need to step up and be seniors,” Pierce said afterward. “I have three seniors who are not playing at a senior level.

“We just haven’t had that fire that we have seen in the past.”

Hamilton scored a game-high 24 points, while Williams added 14 points and senior guard Macy Middleton chipped in 12 in the win.

Hayti and Campbell will play for the tournament championship today at 7:30 p.m. 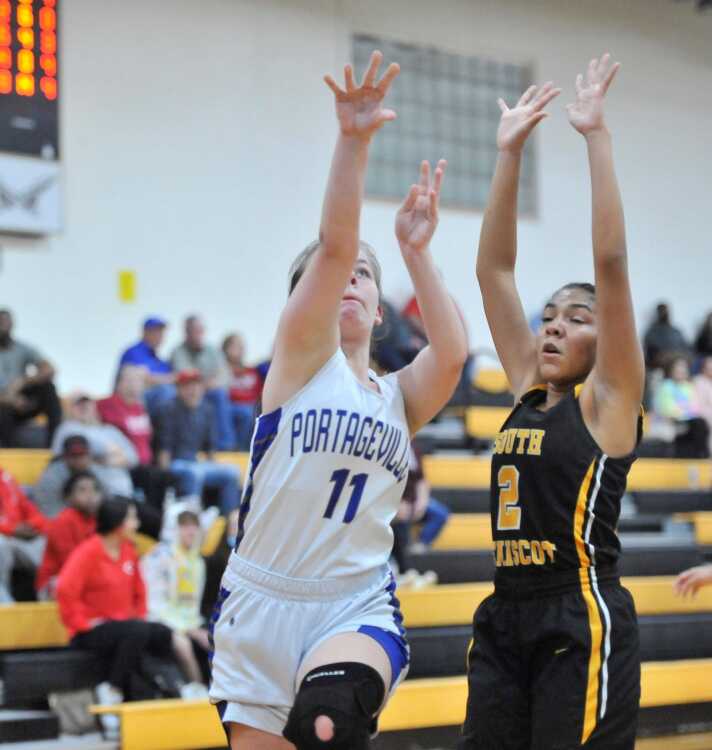 Al Jackson Classic: Portageville gets rematch with Caruthersville with win
Tom Davis
HAYTI -- Portageville got strong first quarters from senior Akiyah Jordan and sophomore Laney Stone to beat South Pemiscot 62-30 in the consolation bracket of the Al Jackson Classic at Hayti on Wednesday.
Respond to this story