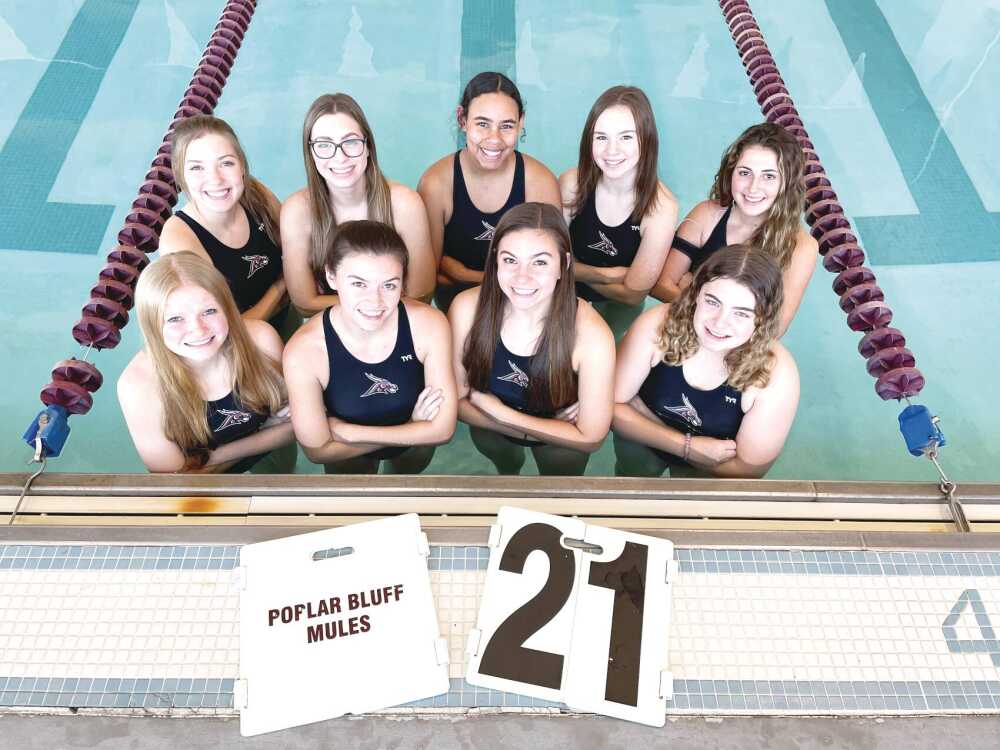 Prior to the start of their season-opening meet Tuesday at the Black River Coliseum, Poplar Bluff’s seniors held a quick presentation to the new swimmers on how to use the lap counter boards.

“If we don’t have that we lose count. Either we’ll come up short or swim extra long.”

Thompson said she learned the ins and outs of a swim meet from the senior class when she joined the team. With nine seniors and just two returning underclassmen, the roster features eight new swimmers this season.

“It’s kind of a sink or swim situation,” Poplar Bluff coach Beth Lewis-Muse said. “This is a group full of athletes and they’re all willing to help each other out.”

During the first few weeks of practice, the returning swimmers were matched up with newer ones to teach a skill and provide peer coaching, Lewis-Muse said.

“A lot of them are stepping up, but they have been every year,” Lewis-Muse said. “This group here has had to fill shoes ever since their freshmen year — bigger and bigger shoes each time.”

In the very first event of the season, Poplar Bluff’s 200-yard medley relay turned in a state consideration time and won in 2 minutes, 6.18 seconds.

Unlike previous seasons when swimmers and relays had an automatic time to reach, the top 32 times in each event will be invited to the state meet, set for Feb. 17-18.

Poplar Bluff also had state consideration times in the 200- and 400-freestyle relays while Olivia Kirkman had one in the 50-freestyle and nearly had another in the butterfly.

Kirkman qualified for state last season in the 100-freestyle, finishing 25th, and is the only returning member of the 200-medley relay that finished 24th at state.

“I was real pleased with the relays because we did graduate some key players,” Lewis-Muse said after Tuesday’s meet.

Addison Kirkman won the 200-freestyle in 2:31.44 followed by Browning.

Sample was second in the 200-IM and the breaststroke with Cibulova third in both events. Smothers placed third in the 100- and 500-freestyle events while Thompson was third in the backstroke after swimming the 500 and a leg on the 200-freestyle relay that finished third.

Thompson, who was a diver in the past for the Mules, decided to stick with just swimming this season.

Tuesday’s meet was the first of four at home for Poplar Bluff but the next one is Jan. 13 against Cape Central. The Mules travel Saturday to the Ladue Invitational and will swim two more times over the next week before the holiday break.

The Mules, who were runners-up to Cape Central at the SEMO Conference meet, look to continue a streak of finishing in the top two as a team in the event for an eighth straight year utilizing the team’s depth once again.

To do that, the newer swimmers that include three freshmen, will be counted on to earn points on Feb. 8, the final meet to lower times for state consideration.

“Our new girls coming up, they produced some really good times and that gives us something that we can start working with,” Lewis-Muse said. “Now that we have a base, we kind of know what direction we need to go.