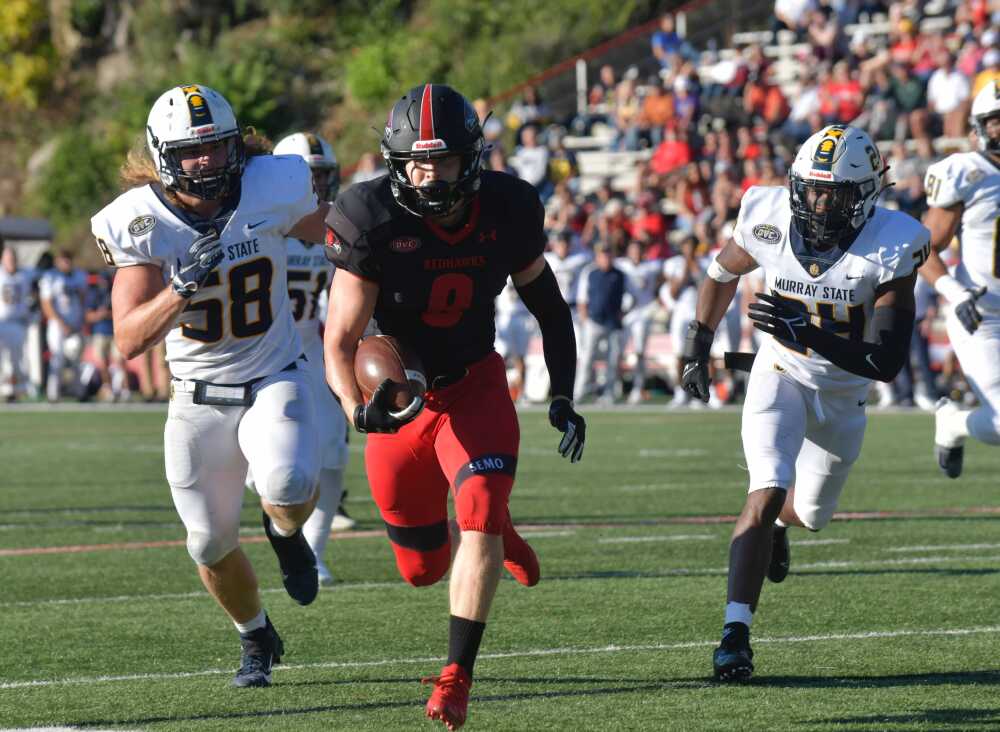 SEMO receiver Zach Smith has been a staple in the Redhawks' passing game since 2017.
Ryan Collingwood - Southeast Missourian

Both of Zack Smith’s senior seasons were derailed.

Southeast Missouri State’s sure-handed receiver has had the strange experience of being granted a pandemic-related mulligan for his final year of eligibility followed by another frustrating setback.

After helping the Redhawks secure back-to-back postseason berths in 2018 and 2019, Smith figured the fall of 2020 would be his best. The coronavirus had other ideas.

But the momentum the 5-foot-9, 200-pound Smith took into the fall 2021 season — his sixth year of college football — was immediately thwarted when he fractured his foot in a Sept. 2 game against regional rival Southern Illinois.

Smith, who will earn a master’s degree later this year, thought his collegiate career was over.

“When I found out that I needed to get surgery, I was really down on myself.” Smith said.

But he rehabbed, begrudgingly looked on from the sidelines in shorts and a medical boot for the Redhawks’ next four games and got himself back in pads for the meat of SEMO’s schedule.

When he returned two weeks ago, SEMO downed Austin Peay 30-14 on the road. He had a team-high five receptions.

The run-heavy Redhawks’ passing offense — a hit-and-miss unit that ranks 107th (141.9 ypg) in the country — looked improved in a last-second 32-31 loss to preseason favorite Murray State last week. Smith had six catches for 86 yards and a touchdown.

SEMO quarterback C.J. Ogbonna, who won a junior college national title last season with Hutchinson Community College, made the move to Cape Girardeau in July, which didn’t give him much time to jell with Smith before his injury.

Ogbonna and Jalyn Williams have split time in recent games, so cohesion in the Redhawks’ passing game has come later than usual due to injured commodities and new faces.

It’s nothing new to Smith, who said he has had four different starting quarterbacks in a long career that includes 147 catches for 1,498 yards and 17 touchdowns.

“It’s kind of hard to develop chemistry not having the same guy every single year, but I think things are starting to click now,” Smith said.

“I’m just thankful for another opportunity, because you just never know when your last time is going to be, and you have to leave it out there every time,” Smith said.

The teams meet again on Nov. 20 at Houck Field in a true OVC game.

“We’re not going to win conference championships and beat Martin if we’re not able to throw it, and he gives us the best chance, because he is good at a lot of things,” Matukewicz said. “He can beat press (coverage), get the deep ball, run-pass option. There’s a lot of ways we can get him the ball. He gives us another dimension.“

The Louisville native hopes to leverage that versatility into a professional career.

“Just giving it a shot and see what happens at the next level,” Smith said. “Whether that be CFL, NFL, XFL or whatever.”

Editor's note: An earlier version of this story had incorrect career stats for Smith and has since been updated