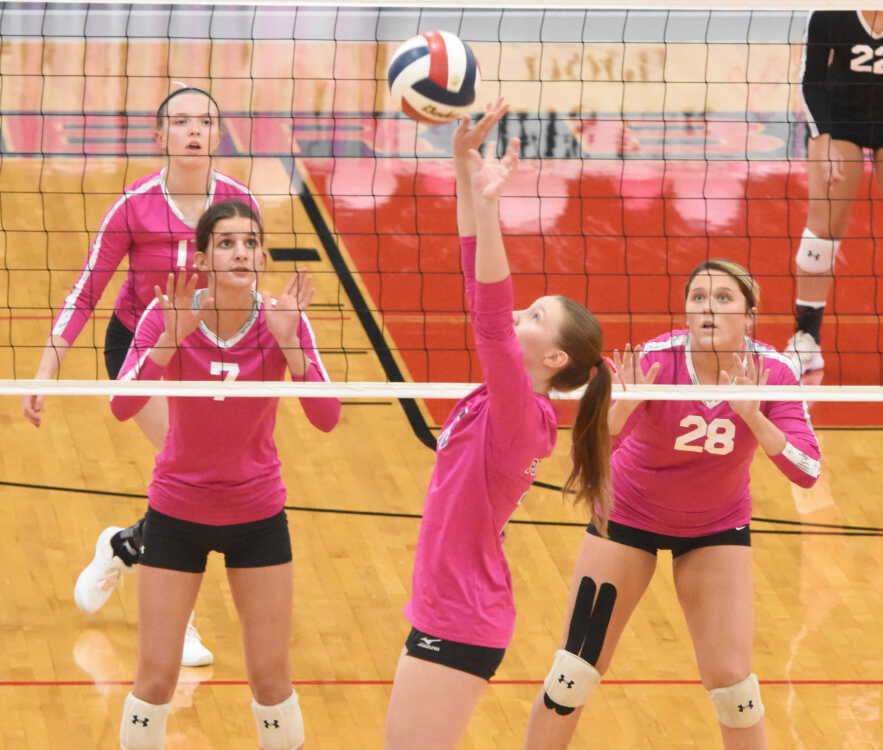 The Bearcats — who received the No. 2 seed in a district featuring Notre Dame, Kennett, New Madrid County Central and Doniphan — are ironing out the kinks.

“Some of the things we keep talking about — energy and communication and locking in on the front row — I see that they are focusing more on those things,” Dexter coach Starla Pulley said. “Getting more touches, more blocks, moving on the floor better. I think we’re making progress.”

The Mules held on their own at the net, producing 28 kills compared to 26 by the Bearcats. Dexter held a 6-2 edge in blocks.

“My front row is something we’ve worked on really hard lately,” Parkin said. “We’re still kind of playing around. I’ve got girls who can play outside and right side. (We’re ) trying to figure out what best suits them.”

Errors proved costly for the Mules. Thirty-three of Dexter’s 75 points came on PB errors, while only 14 of the Mules’ 52 points were scored because of Dexter errors.

The Bearcats never trailed in the opening game, using a 9-2 run to take an 11-4 lead, but Poplar Bluff rallied to climb as close as two points (12-10) on a service ace by Johnson. She and Carda had two aces apiece in the opening set.

Carda, Johnson and Zhoe Bumpus gave the Mules strong serves throughout the night, putting Dexter’s back row to the test.

“I’ve got a couple of girls who like their aces,” Parkin said. “That’s what they focus on in practice. That’s all they want is their aces. Having people I can trust to go back there and serve is a big deal.”

The Mules finished with five service aces, compared to eight by Dexter. Kate Nichols produced a match-high three for Dexter.

The Bearcats answered with a 6-1 rally that featured two kills by Pullen and service aces by Long and Lexie Laramore.

Poplar Bluff scored four of the next seven points, but Long closed out the game with one of her fives kills in the opening set.

The Mules took a 1-0 lead in the second game on a Dexter passing error, but Dexter rallied behind three-straight Poplar Bluff errors to take a 3-1 lead. They tied the score at 3 on a kill by Johnson and a block by Carda, but another error and a kill by Nichols put Dexter ahead to stay.

Poplar Bluff twice cut the lead to one (5-4 and 7-6) and remained within striking distance until the Bearcats closed the game with a 7-3 rally. Long had two kills, Cobb added a kill and a block and Avery Neely won game point with a kill.

“(Consistency is) something we’ve struggled with all year,” Parkin said. “I have to say tonight was the most consistent we’ve been. We’re kind of just moving along, just trying to get better for districts. I think we’re trudging on our way.”

The lead changed hands four times and the score was tied on five occasions in the fourth game.

The Mules used a 3-0 run on a kill and a block by Carda and a service ace by Whitehead to take a 4-2 lead and a 6-0 rally to take a 10-5 lead. Morgan Cisne produced a kill and block over that stretch.

Dexter came storming back with a 12-1 run to take a 17-11 lead. Nichols served an ace to tie the score at 10, and her team took the lead for good on an error by the Mules. Eight of Dexter’s 12 points came on errors.

The Mules never came closer than five points the rest of the way, and Dexter won match point on a service error.

Poplar Bluff (6-13-1) will compete in the Jackson tournament on Saturday at Jackson High School. Dexter (14-9-1) will begin play in the SCAA tournament at 7:15 p.m. Tuesday against Bloomfield at the Bearcat Event Center.