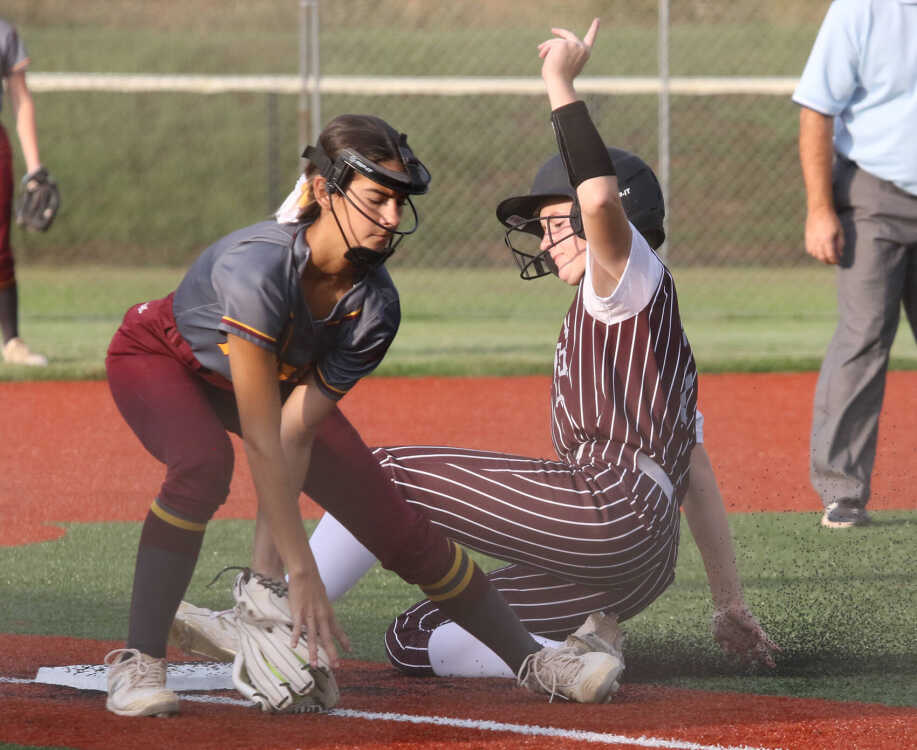 POPLAR BLUFF — Having just seen their teammate get hit in the neck by a ball and appear to pass out, members of the Poplar Bluff softball team were visibly shaken Tuesday afternoon.

With their head coach was in quarantine and the seniors set to play their final home game, assistant coach Kayla Keith gathered the team together.

“When we had that meeting, we just knew that we were going to fight through all of that and we’re just going to come out on top,” said senior Breann Thresher.

It helped to see junior Adrianne Casey, who laid on the turf for minutes while being treated, was able to walk to the dugout.

Getting back to the regular routine of fielding practice and then a Senior Day ceremony, which also brought a few tears, also may have helped.

By the end of the first inning, the Mules had scored three runs and were on their way to a 6-0 win over Kelly.

“I’m just glad we pushed through all the things that happened tonight,” said Cheek, who had a pair of triples among three hits.

Thresher also had three hits while tossing a complete-game shutout with four strikeouts for the Mules, who got contributions from all seven seniors.

“I really think our seven seniors showed up tonight,” Keith said. “They finished the game great for us and I think they showed true leadership.”

After the meeting, the team walked to the outfield fence and back, picked up their gloves and went through their pregame fielding practice. Keith said she gave the players a few minutes to compose themselves, telling them to, “walk if off, cry it out and let’s get back and let’s win a game.”

Thresher led off the bottom of the first with a hit and scored on Cheek’s single to the left-field gap. Davis made it 2-0 with a sacrifice fly caught by the second baseman in shallow right field. Madelyn Hefner avoided the catcher to score before Ella Zgaynor’s two-out single made it 3-0.

That was enough for Thresher and the Poplar Bluff defense.

Kelly (12-13) left 11 baserunners stranded and finished 1 for 9 with runners in scoring position. Carlee Ray and Kendyl Stuckey each had a pair of hits with Stuckey reaching base three times.

Thresher, who allowed six hits, walked three and hit a batter, credited the defense for the team’s fourth shut out of the season.

“They’re amazing to be honest with you,” Thresher said. “Every time I gave up a hit I didn’t even get scared or anything. I knew they got my back. As long as I hit my spots, they got my back.”

Kelly loaded the bases in the fifth when Allie Daniel led off with a single while Ray and Paiten Groves had one-out hits. Thresher got out of the jam with consecutive fly balls to Sullivan, the right fielder.

The Hawks also had two on with nobody out in the second inning but a strikeout, a well-defended bunt and a soft liner to the pitcher kept Kelly off the scoreboard.

Webb started a relay to throw out a runner trying for a triple to end the third.

Three straight hits in the second added a run for the Mules.

Kennedy Zgaynor started the rally with a one-out single before Thresher beat the throw to first on her chopper to the left side. Hefner followed with an RBI double down the right-field line.

Cheek hit an RBI triple in the fourth and scored on a bunt by Courtney for a 6-0 lead.

Cheek hit a grand slam in Monday’s 6-2 win at Notre Dame, which the Mules also beat in 11 innings back on Sept. 14.

“I’ve been struggling, honestly,” said Cheek, who came in hitting .455 on the season but had two hitless games over the weekend.

The team learned Sunday that McDuffey would not be with them this week. The regular season ends Saturday with a trip to West Plains. The MSHSAA Class 5 District 1 tournament will be hosted by Fox but the bracket has yet to be determined.

“We’re getting a little anxious for districts, but I feel like we’re on top of things this year,” Cheek said.

The Mules have clinched their second straight winning season and were 3-2 at home.

“It just felt good to be here for the last time,” Thresher said.

“We do play a tough schedule and I know that helps us in the postseason so we’re just trying to get better every game and make sure you’re ready,” Heuring said.