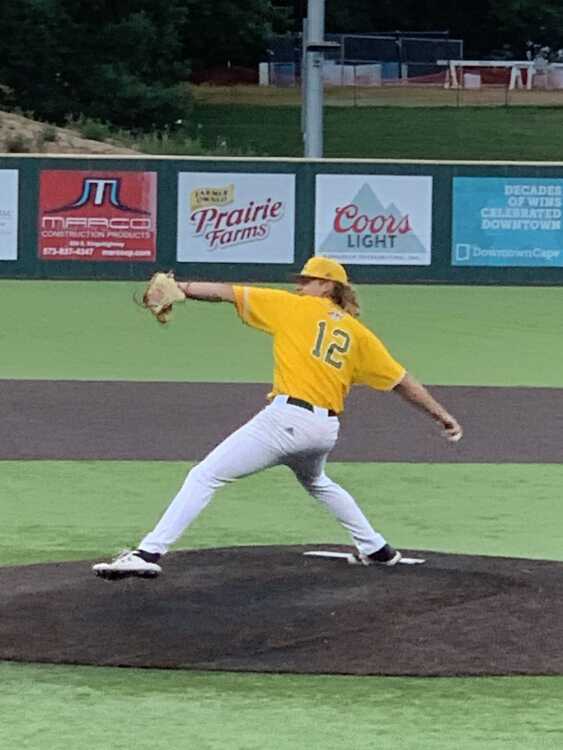 Cape Catfish pitcher Hunter Ralls throws a pitch against the Burlington Bees Saturday at Capaha Field. The Catfish would go on to win in extra innings, 4-3.
Michael Jeter

With the game knotted at three runs each for the Cape Catfish and the Burlington Bees in the bottom of the 11th inning and the bases full of Catfish runners, Burlington relief pitcher K.J. Baker walked infielder Diego Johnson, scoring pinch-runner Chad Donze from third base, giving the Catfish a 4-3 walk-off victory, taking the first game of a quick two-game series at Capaha Field on Saturday.

Catfish catcher/outfielder Josh Caraway got the home half of the 11th inning going by getting on first base via throwing error as Carway hit a slow ground ball off the end of the bat to Bees third baseman Brady Jurgella, who played most of the game in right field, making the switch to the hot corner in the second extra frame.

A sacrifice bunt by Jake Beekman provided the winning run to move to second base with only one out, but Caraway would be injured on the play and had to exit the game, as pitcher Chad Donze ran as pinch runner.

The very next batter, lead-off hitter Andrew Stone, got on base as Burlington manager Gary McClure elected to intentionally walk Stone, loading the bases up with only one out.

That’s when Johnson took the at-bat of the game, working the count and eventually taking ball four, allowing Donze to walk home to score the winning run, giving the Catfish their 15th win of the season and are now four games above .500 and only one game back of Prairie Land West Division leading O’Fallon Hoots.

Cape trailed for much of the game, as the Bees starting pitcher Jalen Evans was sensational through 6 ⅔ innings, allowing no runs on just five Catfish hits, striking out nine and walking one lone batter.

After Evans exited the game as his pitch count rose to nearly 100 pitches thrown, McClure went to his bullpen, bringing right hander Reece Wissinger into the ball game.

Wissinger pitched effectively as well, striking out six in three and ⅓ innings, but would allow the game tying hit to Catfish outfielder Seth Johnson, who drove a fastball up the middle for a two-out RBI hit that scored both Diego Johnson and starting catcher Mason Speirs in the eighth inning. The inning was started by a lead off blast to right field by Stone to get Cape on the board.

“Seth has all the capability in the world and we’ve been working on him mentally to realize it. He’s a big athlete and he’s a big man and once he realizes just how good he is, the sky's the limit for him,” Catfish manager Steve Larkin said about Johnson’s potential.

Cape starting pitcher Hunter Ralls was equally as tough on the mound as his starting pitching foe, putting up zeros on the scoreboard until the fifth inning when Ralls left a pitch up and Bees outfielder Marcos Sanchez deposited over the Catfish Homerun Deck in right field, putting Burlington ahead, 1-0.

Ralls would accumulate another earned run scored on him but was credited with allowing three total runs, as the SEMO right hander pitched 7 ⅔ innings, striking out five but did not issue a free pass. He was unable to record the win.

The winning pitcher was Trey McDaniel, who threw both of the extra inning frames and did not allow a run with just one hit allowed while striking out one.

“Hunter came out and had another great start for us,” Larkin said of his starting pitcher.

“He came out, threw strikes, trusted his stuff, and gave us a chance to win. That’s all you can ask for.”

“We knew we had to keep fighting, Their starting pitcher was dominant. We knew if his pitch count came into play and we could get into their bullpen, we would have a chance,” Larkin said.

“When we finally got a chance to score, we were able to push across some runs.”

Offensively, Andrew Stone led Cape, going 3-for-5 at the plate, getting the first run on the board with the home run. He also recorded a double, a single, and drew a walk.

Diego Johnson had two hits and an RBI and scored the winning run while Johnson drove in the two most important runs of the game to tie the game at three runs each.

The Catfish will look to take the second game against the Bees today at Capaha Field, with first pitch at 7:05 p.m.