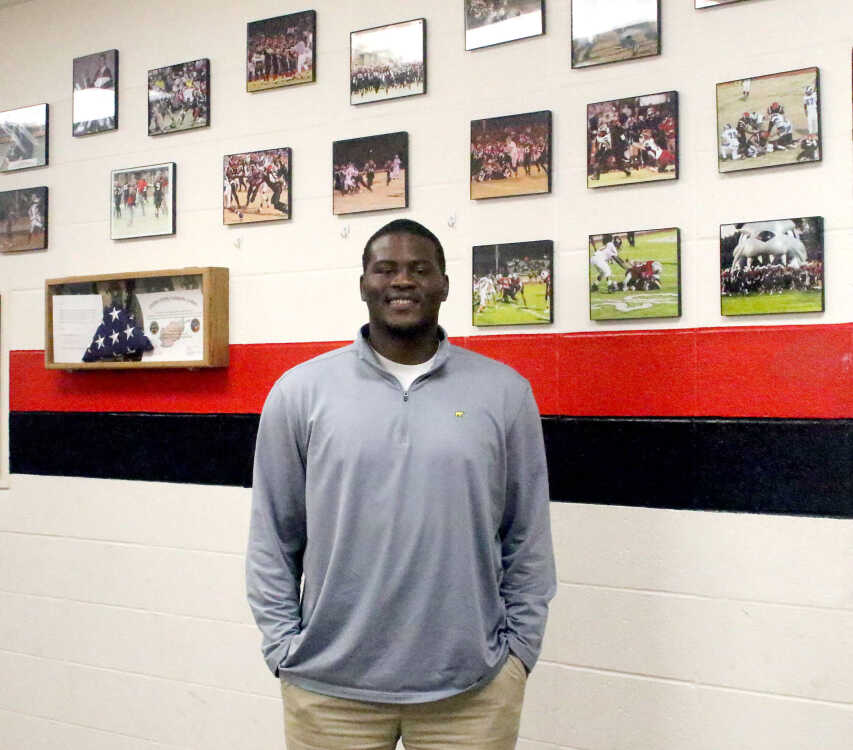 Treston Pulley, a 2011 graduate of Sikeston, was named the head football coach of the Bulldogs on Monday afternoon. Pulley has been an assistant coach with Sikeston since 2017.
David Jenkins/Standard Democrat

SIKESTON — Treston Pulley could only smile while sitting at his desk, reflecting on the whirlwind few days that ended with the Sikeston native as the head coach of the Bulldogs football program.

“I’ve stayed steadfast in what I believe in,” Pulley said. “I’ve always known this will be the job for me. My saying has been all week, ‘I wasn’t the first hire, but I was the best hire.’”

Pulley was named the head coach Monday afternoon taking over for Kyle Wagner, who was hired to coach the Bulldogs in February. Wagner, who accepted the head coaching job at powerhouse Lutheran North on Friday, rescinded his contract with Sikeston R-6 the same day. 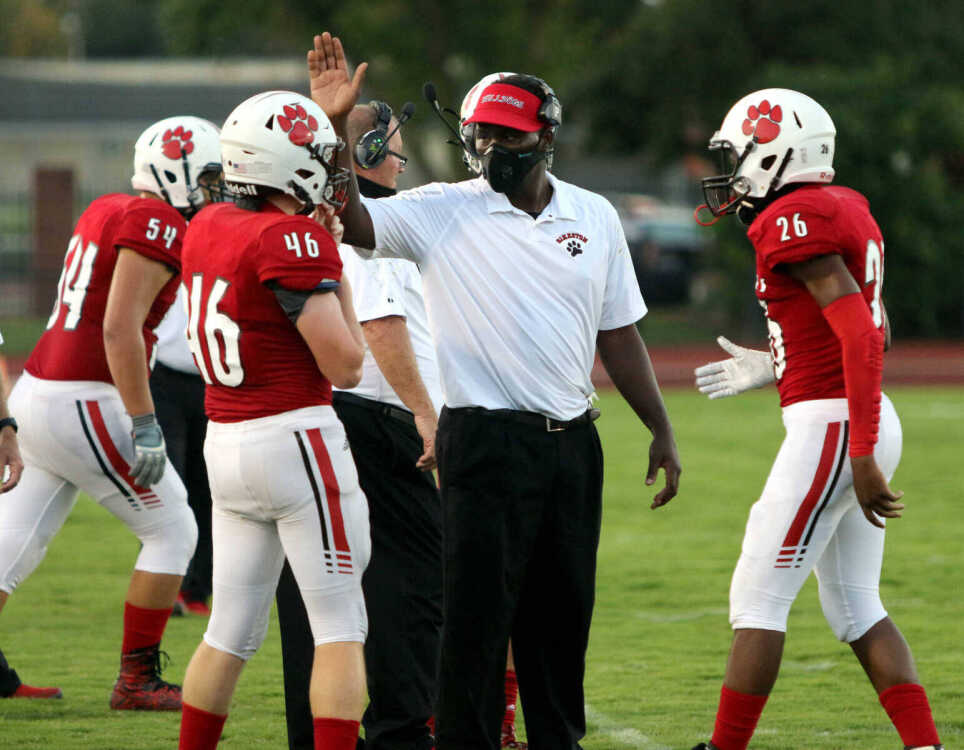 That left an opening to lead the football program and it didn’t take the R-6 Board of Education and administration long to tab the up-and-coming assistant coach as the man to lead the program.

The Board voted unanimously Monday to take the administration’s recommendation of Pulley and he was interviewed by the hiring committee and ultimately hired.

“After interviewing Mr. Pulley (Monday), I believe everything has worked out the way it should have. We now have a young man who has proven his commitment to our school district and a true love for our students,” stated Sikeston R-6 Assistant Superintendent Shannon Holifield.

Pulley was a graduate of Sikeston High School in 2011 before moving on to play at Lincoln University. He then came back to Sikeston as an assistant coach in 2017.

He sees his age as being a huge benefit as a head coach.

“Me being young, I can associate with the kids in a way they understand,” Pulley said. “I’m a guy that’s played college ball not too long ago. I played in the same uniforms they’re playing in now, so these guys understand me, because I was in the same position they are in now. Me being young is a double bonus.”

Pulley also experienced success as a Bulldog. A star linebacker, Pulley helped lead Sikeston to back-to-back state semifinal appearances as a junior and senior. And he says the weight room is going to be the foundation of the Bulldog football program.

“When I was a freshman or a sophomore, we bought into the weight room,” Pulley said. “We got new equipment in the weight room and we had a championship attitude because we knew the work we put in was going to pay off at some point. So the weight room is the sole foundation of what we are going to do to rebuild this program.”

Pulley is the founder of the Lincoln League, a youth flag football program and also, along with his sister Taneshia Pulley, is a leader of Youth Empowerment 573. The group was named the Sikeston Regional Chamber’s Civic Organization of the Year in 2020.

Working with the youth and getting to know them, along with their parents, is a big positive according to Pulley.

“Building a relationship with the parents from their kids being in kindergarten, all the way up through the sixth grade is big,” Pulley said. “Then they’ll go into junior high football and that’s when they’ll start officially under me.”

Pulley said it will be the youth program that turns the Sikeston program around. The Bulldogs haven’t had a winning season since 2016 and finished the 2020 season with a 2-8 record.

“The youth program is my baby,” Pulley said. “If you look at the major programs, like Webb City and Jeff City, they’ve bought into the youth program. The program is here at the Sikeston Field House and there is no excuse for any kid not to be participating if they want to call themselves a football player.”

Pulley said offensively he wants to open it up, play fast and try to score as many points as possible while also taking care of the ball.

“Defensively we are just going to get back to what we do,” Pulley said. “Defensively you can expect great things. We want to be fast, physical and (have) some head hunters.”

While Pulley is one of the youngest members of the coaching staff, his time as an assistant the last several years as well as playing for a couple has built a relationship of respect.

“One thing my coaches know about me is that I’m a leader by example,” Pulley said. “I’m always going to be one of the guys there who’s going to do it first and they’re going to help me along the way. They’ve known me since I was a seventh and eighth grader. Having those guys as my coaches is great.”

Pulley said he has already received a lot of support from the community but said it will be important to bridge the gap between the team and community.

“Me being a guy that’s been here, I know how things work,” Pulley said. “So lets build this community where we know it can go. This town has a lot of talent.

“I want as many kids to play as possible. I believe in our community and let’s build this thing together. It’s going to take every angle of Sikeston to get this thing back to where we used to be.”