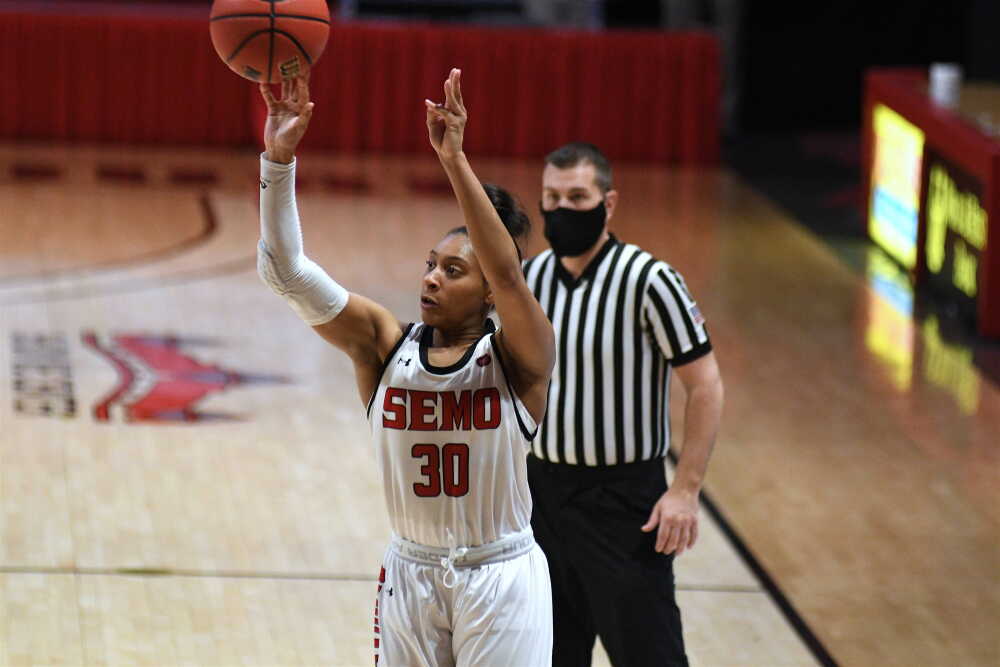 Southeast's Terri Smith (30) attempts a jump shot in SEMO's 77-62 win over SIU-Edwardsville, January 28, 2021, at the Show Me Center. SEMO and the Cougars play again Saturday in the regular season finale for both teams. On Thursday, Smith had a career-high 17 as the Redhawks were upset by Eastern Illinois, 65-57.
Tony Capobianco ~ tcapobianco@semoball.com

It’s not how a team starts, but how it finishes.

Short-handed and bedeviled by injury, Southeast Missouri State (14-10, 12-7 Ohio Valley Conference) came out firing Thursday at Eastern Illinois, as it built a 9-0 lead and still led 25-19 at halftime.

However, the Redhawks ultimately were unable to seal the deal, as their solid start was followed by a disastrous second half.

With the win, EIU clinched a spot in the upcoming OVC Tournament.

“I really loved our first half fight, but you can’t turn the ball over 22 times the way we did tonight,” Redhawk coach Rekha Patterson said following the loss.

The Panthers were 0-for-9 in 3-point shooting and were outrebounded by SEMO, but outscored the Redhawks in two important metrics.

The Panthers had a 24-3 edge in points off turnovers and had a whopping 48-22 advantage in points in the paint.

EIU held its biggest advantage, 57-43, midway through the 4th period.

SEMO, which lost the season series to Eastern Illinois, was confounded by the Panthers’ second-half full-court press.

“Unfortunately, we didn’t break their press the way we’re supposed to," Patterson said, "and even when we made adjustments, we still didn’t play aggressively and didn’t attack."

The Redhawks were led by redshirt junior guard Terri Smith, who had a career-best 17 points, including five made 3-pointers.

Two other Redhawks finished in double figures, as Sophie Bussard and Deanay Watson each had 12 points.

SEMO’s senior star forward, Tesia Thompson, who is the no. 2 scorer in the conference, missed the game with a nagging injury. Thompson is not traveling with the squad on its two-game road trip.

“It’s (Tesia’s) right knee," Patterson said. "Nothing is torn, (but) she hasn’t been cleared to play and we’re just hoping we have her back for the conference tournament."

The Redhawks are the defending OVC Tournament champions.

“Tesia is rehabbing but we don’t know if there’s enough time for her to be ready for the tourney,” Patterson said. "If she can go, she’ll go.”

The Redhawks are currently in fourth place in the 12-team league.

With Thompson out, SEMO is relying more on point guard Taelour Pruitt, who missed seven games due to injury.

In addition, two Redhawks, Kennedi Allen and Nyrobi Pillers, have been bounced from the 2020-21 team by Patterson for “not following the standards of the program.”

SEMO hopes to gain some pre-tournament momentum when it travels to SIU-Edwardsville (6-18, 3-16) on Saturday at 1 p.m.