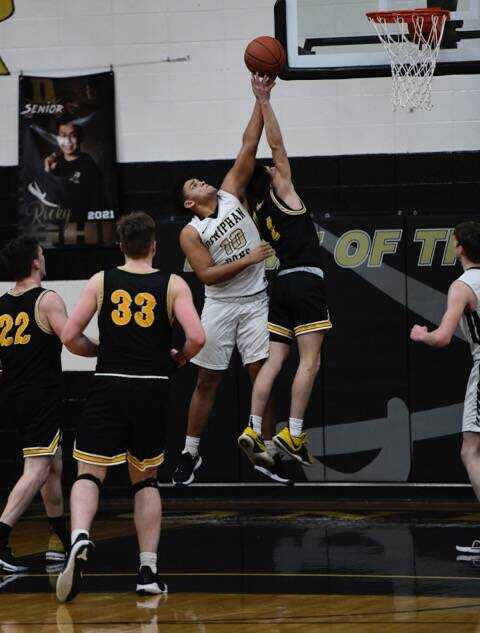 DONIPHAN - Ethan Jones tied a school record for three-point field goals in a game Thursday night as the Doniphan Dons added to their late season momentum with a 78-44 win over the Kennett Indians.

Jones, who scored a career-high 36 points, connected on 10 threes to tie the school record set by Adam Carpenter during the 2004-05 season.

“I gave him a big hug because he makes me look better when he shoots the ball like that,” said Dons coach Daniel Cagle.

Doniphan improved to 15-7 overall and 8-1 since Jan. 1. The Dons and Kennett will both compete in Class 4, District 1 when postseason play begins later this month.

“We played about as good as we can play and shot the ball the best we have all year,” said Cagle. “We beat a really good Kennett team that was in the finals at Bloomfield.”

“Doniphan came out and shot it really well tonight and we didn’t do much to slow them down,” said Kennett coach Corbin Clark. “We let them have rhythm shots and they knocked them down. They just whipped us.”

Jones missed his first 3-point attempt and also missed twice at the free throw line in the first two minutes. But back-to-back 3s within a 20-second span started the Dons on an 18-0 run that produced a 25-4 lead after one quarter.

Each team made four 3s in the second period with Jones connecting three times for the Dons and Ben McMullan hitting two for the Indians. Doniphan led 45-22 at the half.

Any thoughts of a comeback by the Indians disappeared in the first four minutes of the third quarter. While the Indians struggled to hit one-of-eight from the field, the Dons made six-of-eight.

Senior Orie Owen scored six of his 17 points as the Dons opened the lead to 59-25. Doniphan led 63-30 going into the final period.