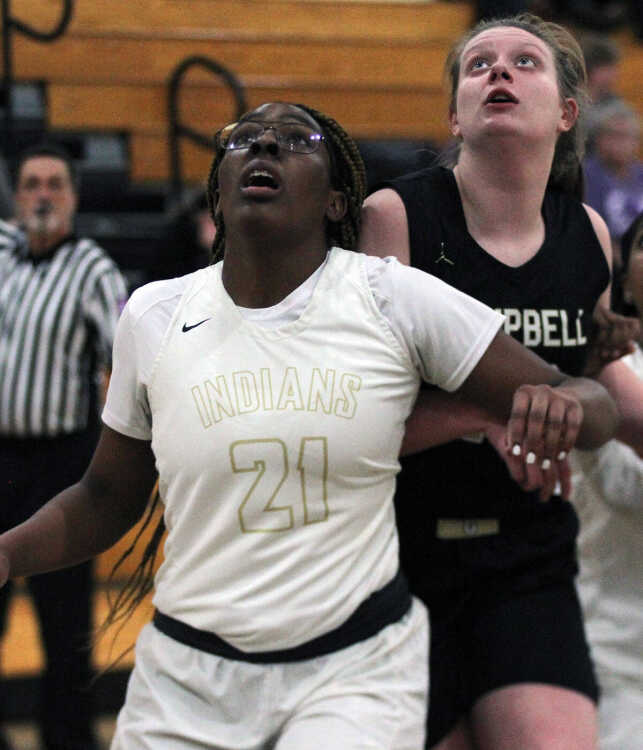 CAMPBELL - Hayti Indians coach Craig Rodgers wanted to wait for the right time to implement his pressure defense against the Campbell Camels Monday.

“We didn’t want to press too early,” Rodgers said. “We wanted to wait until they got tired. We tried to wear them down first."

The right time to press finally presented itself with Hayti clinging to a 46-44 lead with about five minutes left in regulation.

The press paid off as No. 2 seeded Hayti closed out the fourth quarter on a 14-3 run to beat No. 3 seeded Campbell 60-47 in the nightcap semifinal of the Bootheel Conference varsity girls basketball tournament at Campbell High School.

“Campbell came out and gave us their best shot,” Rodgers said. “We finally threw the press at them in the fourth quarter and forced some turnovers. Fortunately, we were able to score off of them in the open court.”

Campbell stayed within single digits of Hayti until the closing minutes of regulation. The Camels led 17-14 at the end of the first quarter before Hayti moved ahead 34-29 by halftime and continued to lead 43-41 at the end of the third quarter. Hayti’s largest lead in the first three quarters was 40-33 with 3:21 left in the third quarter and Campbell’s largest lead was 24-20 with 3:53 left in the first half.

“We came out ready to go,” Campbell coach Laura Foster said. “We just made a few too many mistakes the last few minutes. We are young and we showed it during that stretch late. But before that I thought we played very well.”

Hayti junior guard Amiya Johnson proved to be a scoring threat from start to finish. Johnson scored at least six points in every quarter on her way to a game-high 31 points. Johnson recorded eight 2-pointers, four treys, and made three of five free throws.

Junior Akyra Humes also enjoyed success from the perimeter for Hayti. Humes knocked down three treys, including two in the fourth quarter run by Hayti, on her way to a 13-point performance.

“She got released from an injury after Christmas and she’s been big for us,” Rodgers said. “She’s moved into a starting role. She’s able to stretch the floor for us and it helps us out because she hits shots and plays hard on defense. She does everything we ask her to do.”

Three players put up at least 11 points for Campbell. Sophomore Marie Wheeler, who hit a pair of 3-pointers in the first quarter, paced Campbell with 13 points. Seniors Hannah Littrell and Macy Hendrix added 11 points each.

“We played the best that we could but we still have work to do because we are still growing,” Foster said.

It is the third time Hayti has beat Campbell this season. Hayti also beat Campbell 45-42 in the championship of the Al Jackson Classic Dec. 3 and won the regular season meeting 65-47 on Jan. 21.

Campbell (9-9) is back in action Feb. 8 when it hosts Puxico. The Camels have four regular season games remaining before they begin play in Class 2, District 1 where they could potentially play Hayti a fourth time.

“We are likely going to see Hayti again in the district,” Foster said. “So here we go for No. 4. We know what we will be facing in the district tournament and we will have a couple weeks to prepare.”

Defending conference tournament champion Hayti (11-3) will take on No. 1 seeded Holcomb in the Bootheel Conference title game Thursday at 5:30 p.m. at Campbell High School. Holcomb edged Hayti 59-54 in the first meeting on Dec. 8.

“It’s what we wanted,” Rodgers said. “We want to play them again. I feel like we didn’t give them our best shot the first time when we played them at their place. We are a different team now. All we wanted is a shot and we get that shot on Thursday.” 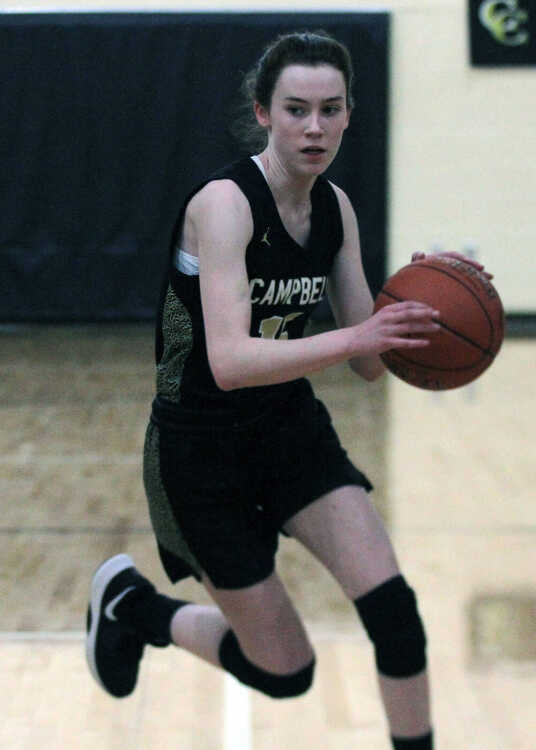 Photo by Dustin Ward, staff
Campbell's Marie Wheeler penetrates against the Hayti defense in a semifinal of the Bootheel Conference varsity girls basketball tournament Monday at Campbell High School.
Order this photo
Respond to this story