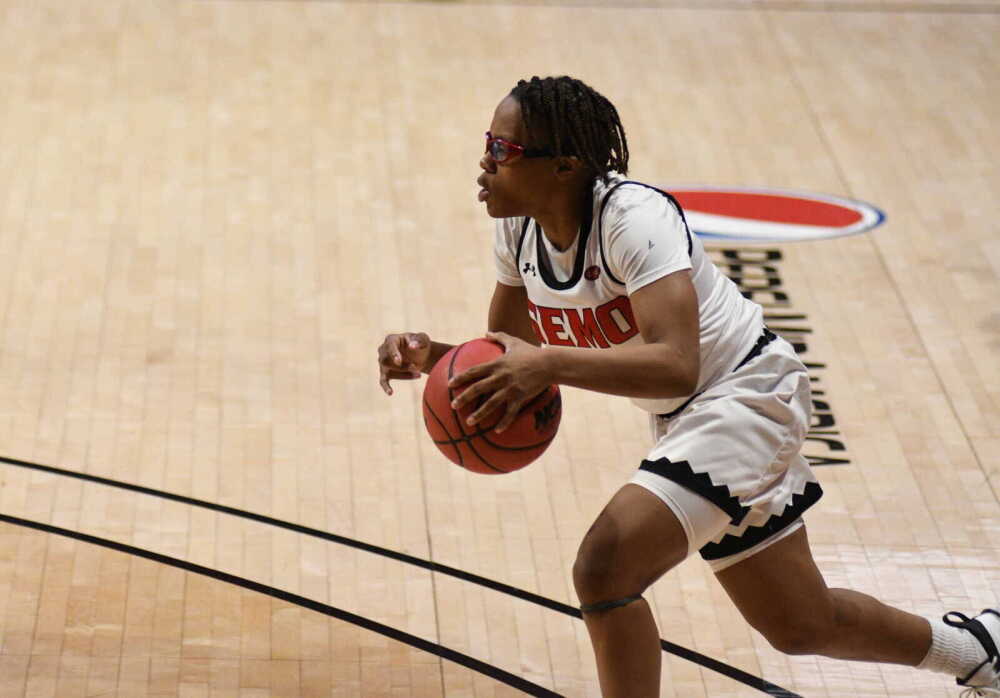 UT-Martin, the no. 1 team in the Ohio Valley Conference, playing without injured senior forward and WNBA hopeful Chelsey Perry, still had more than enough to defeat visiting Southeast (9-7, 7-4) as the Skyhawks (11-3, 10-1) won 80-70, at the Elam Center Monday.

The 6-foot-2 Perry, averaging 26 points per game, was on the bench as SEMO got out to a 10-point lead with 6:45 remaining in the second quarter.

“We knew that Perry only played eight minutes in her game the other day (and) we’re obviously disappointed because we would have loved to get a win with their key player missing,” said sixth-year coach Rekha Patterson, whose squad has now lost as many games as it did the entire 2019-20 season, when SEMO won the OVC Tournament and posted a 25-7 final mark.

SEMO held on to a two-point edge, 43-41, at halftime, outshooting their hosts 59%-47% but could not sustain the momentum.

“We needed to give ourselves more of a cushion before the break,” said Patterson, who lamented the lack of defense of her squad.

“We’ve been holding opponents to 56 points per game and today we gave up 80,” said the reigning OVC Coach of the Year.

“We didn’t come out of the locker room those first four minutes and set the tone and we turned the ball over too much down the stretch,” said Patterson, noting UT-Martin scored 23 points off SEMO turnovers, compared to 14 for Southeast.

SEMO managed to whittle the deficit to four, 64-60, in the final period but that’s as close as it got for Southeast, which suffered its second straight defeat.

Tesia Thompson had 14 points, Terri Smith finished with 12 and LaTrese Saine had a double-double, scoring 10 and nabbing 11 rebounds.

SEMO outrebounded their hosts, 39-29, outscored them in the paint, 34-30 and had a slight edge in second chance points and steals.

“Saine and Thompson got into foul trouble early and we got out of our normal rotations and that hurt us, too,” Patterson said.

Southeast comes home to the Show Me Center for two games later this week – and the road back to conference supremacy doesn’t get any easier anytime soon.

“We play Tennessee Tech, the hottest team in the conference, with five wins in their last six games Thursday, and Jacksonville State on Saturday is the only OVC team to beat UT-Martin so far,” said Patterson.

The hardcourt at the Elam Center is named for the late Pat Summitt, a UT-Martin grad and the third winningest women’s coach in NCAA history who spent 38 years leading the University of Tennessee program.