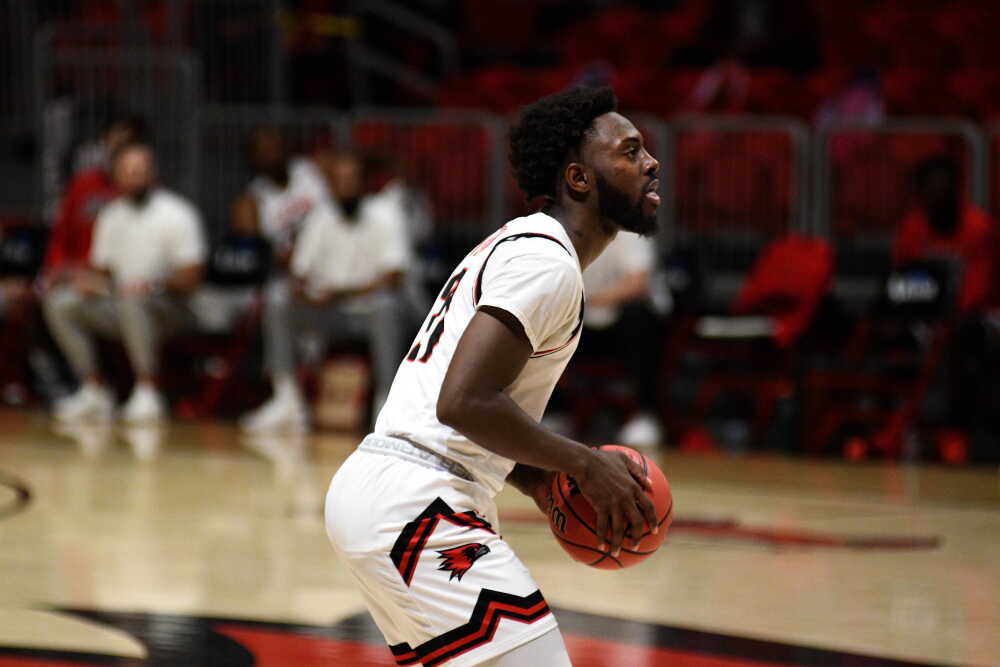 Southeast's Nana Akenten gets set to shoot a three-pointer earlier in the season at the Show Me Center.
Tony Capobianco ~ tcapobianco@semoball.com
Order this photo

The Redhawks were without their leading scorer, junior guard Chris Harris.

“He dinged his thumb up at practice on his shooting hand,” head coach Brad Korn said. “He wasn’t comfortable enough giving it a go so it was a gametime decision. We just decided to not let him go, didn’t want it to get any worse than it is. I think he’ll be fine.”

“He played a phenomenal game,” Korn said. “Obviously when you’re missing a guy like Chris Harris, you need somebody to step up and play enough.”

This was only the third time this season in which the transfer from Nebraska scored double-digit points. His previous high was 17 points against Kansas City in the first game of the season.

“He’s such a great shooter that when you miss your defensive assignment or when you have a breakdown he makes you pay,” Korn said on Muszynski.

The Bruins took advantage of the Redhawks five turnovers in the first five minutes and started the game on a 10-2 run.

The Redhawks clawed back to tie the game 33-33 on the final minute of the first half on a three-pointer by Akenten.

SEMO took a 35-33 lead at halftime on a pair of free throws by DQ Nicholas. It was his only baskets in the game.

The Bruins started faster in the second half than the first half with an 11-2 run. SEMO once again closed in on Belmont and took advantage of a technical foul by closing in on a two-point margin at 64-62 after a pair of free throw by Akenten.

Belmont then went on a 13-4 run to close out the game. The Bruins extend their winning streak to eight games and remain perfect in conference play.

SEMO remains winless against Belmont. The Redhawks are 0-10 all-time against the Bruins since Belmont joined the league in 2012-13.

SEMO will remain in Nashville for a rematch with Tennessee State on Saturday at 4 p.m.