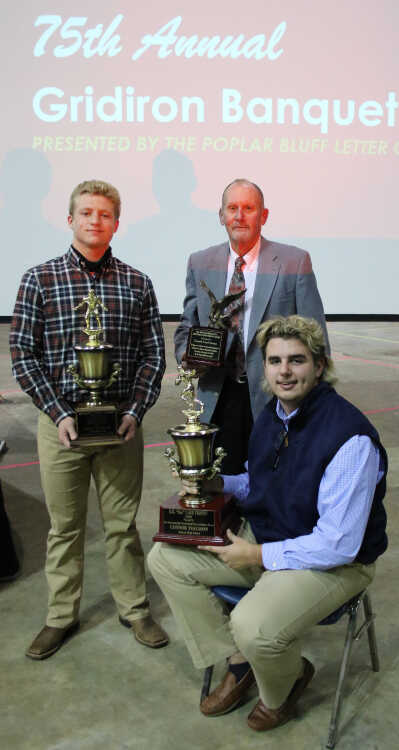 POPLAR BLUFF - Jackson teammates stood on the stage as finalists for the coveted Carr Trophy and Derland Moore Award during the 75th Gridiron Banquet at the Black River Coliseum on Wednesday.

In each case, one took home an award and said they would have been just as happy had they heard their teammate’s name instead.

After winning the program’s first state championship to finish off a 14-0 season, there was little doubt the trophies were headed to Jackson.

“I was kind of surprised, to be honest,” Indian senior offensive lineman Connor Tollison said of winning the Carr Trophy, which is given to the most outstanding player in the SEMO Conference.

“I thought (Jackson quarterback Cael Welker) was going to win.”

Tollison became the first offensive lineman to win the award, which was first awarded in 1979.

At 6-foot-5, 295-pounds, he also made history as the first three-time Lineman of the Year Award winner. That award, which has been given out since 1953, had only eight other two-time winners.

“The thing that I told all of the recruiters that came through,” veteran Jackson coach Brent Eckley said of Tollison, “in the end, Connor wins. When he has a job to do… whatever he is supposed to do, he wins, play in, and play out, for four years.”

Tollison protected Welker, who was a fellow Carr Trophy finalist, and helped the Indian offense average 55.7 points and 429.0 total yards per game.

Rated as one of the top offensive linemen in the state, Tollison signed his National Letter of Intent to play at the University of Missouri earlier in the day.

The Indians annihilated Platte County 42-7 in this year’s title game.

“I’m kind of a guy that’s like I’ll never take the recognition,” Tollison said. “It’s good to get that but even if he would have won I would have been just as happy as I was for him.”

Jackson senior linebackers Bryce Norman and Randol McDowell were both up for the Derland Moore Award, which goes to the league’s best defensive player.

The duo played next to each other on a defense that held opponents to 11.7 points per game.

“Me and Randol have been friends since the second grade playing by each other,” Norman said. “We always strive to be the greatest person on the field.

“It feels great to be up there and for him to be a (finalist) for the same award and I would have been just as happy for him.”

The 6-foot, 220-pound senior had 6.0 sacks and three forced fumbles while intercepting a pass this season.

Earlier in the day, Norman signed his National Letter of Intent to play at Southeast Missouri State University.

“I feel like I’ve been waiting on a (Division I) offer for the past two years,” Norman said. “(Redhawk coach Tom Matukewicz) gave me a chance and I just can’t wait to get over there and work my butt off.”

Members of Derland Moore’s family presented the award to Norman who shook each person’s hand as he left the stage. Moore died in September.

“To meet his whole family up there was such an honor,” Norman said.

Jackson coach Brent Eckley had mixed emotions seeing his players up for the same awards.

“You’re happy for the guys that win it but you feel bad for the guys that are up there almost for them because we didn’t have a guy that didn’t put his entire heart into it,” said Eckley, who was named Coach of the Year in the North.

“Nobody asked me my opinion,” he added. “And I’m glad they didn’t.”

Welker threw for 2,506 yards, completing 72.2% of his throws. He threw 38 touchdowns, a quarter of his 151 completions, and did not throw an interception in 209 attempts. He also ran for 15 scores and 552 yards, averaging 6.4 yards per attempt, and averaged 43.7 yards per punt, pinning an opponent inside the 20-yard line on five of his seven punts.

Jordan Jarrett of Kennett was another finalist for the Carr Trophy.

The junior ran for 1,670 yards, averaging 10.6 yards per carry, for 32 touchdowns. At outside linebacker, he had 3.5 sacks and forced two fumbles.

McDowell, a senior, had 116 tackles including 30 for a loss and 5.0 sacks. He recovered three fumbles, forced one, and broke up a pass.

Kennett’s Tanner Duncan was also a finalist for the Derland Moore Award.

The senior linebacker had 81 tackles, including 6.5 sacks with two forced fumbles, one recovered, and an interception, leading a defense that allowed 14.9 points per game.

Jackson, Kennett, and Hayti were presented with their conference championship plaques.

Jarrett’s 206 points earned him the Scoring Award for the Central, while Kennett’s Josh Hounihan was named the top lineman, and Joel Wyatt was named Coach of the Year in the SEMO Central Division.

Hayti’s Trayvon Thomas won the Scoring Award for the South Division with 158 points, while teammate Kevin Luster was named top lineman in the South.

Hayti’s Dominique Robinson was named Coach of the Year.

Cape Central was presented with the School Sportsmanship Award as selected by the SEMO Football Officials Association.

While the conference coaches select the All-Conference team, an eight-member committee determines the Carr Trophy and Derland Moore Award winners.

Carl Gross, who coached at Jackson from 1989-2007, was presented with the Sam Giambelluca Lifetime Achievement Award.

In 19 seasons with Gross as head coach, Jackson was 137-69 with six district titles, nine conference championships, and appearances in the state championship game in 1994 and ’95. Gross was also an All-SEMO Conference player and earned the Lineman Award playing for Cape Central in 1970.

“Jackson is an unbelievable community to coach at,” Gross said. “One reason why I was successful is because No. 1, you have great players. I was blessed to have great assistant coaches and you also have a community that backs it.

“The kids and my assistants and the people of the town made it fun to go to work every day.”