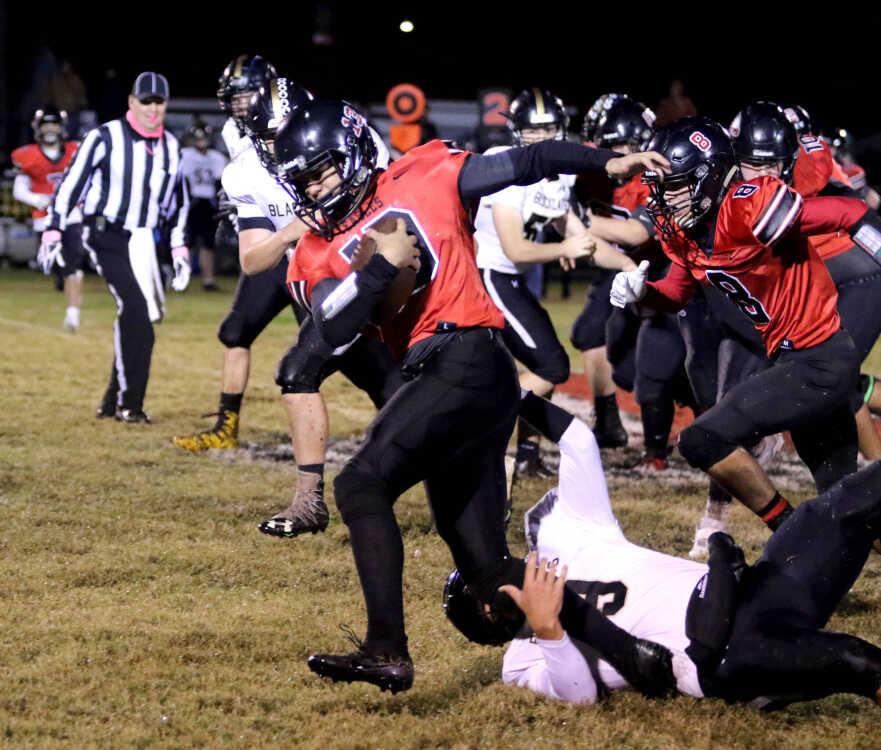 Neither team completed a pass in the contest, with the Eagles’ ground game leading the way to an 18-0 win, their second shutout of the season.

“We challenged the kids,” East Prairie head coach Chad Jamerson said. “We knew conditions were going to be difficult, so we challenged their ability to take care of the football. That was one of the biggest things.

“We asked, ‘Can you take care of it?’, and they answered that for us. We won the turnover battle, and that helps us win the game.”

East Prairie didn’t have a turnover in the contest, recovering their only fumble in the fourth quarter.

A 47-yard drive to start the game put the Eagles in the driver seat when Jase Aycock found the endzone on a four-yard rush.

Back-to-back touchdowns in the second quarter would extend East Prairie’s lead, with the first coming on a 38-yard sprint from Lucas Moore with 6:44 before the half.

After getting the ball back, the Eagles scored one last time, on a 35-yard run from Aycock, giving him his second touchdown of the night and his team an 18-0 lead with 4:19 left in the half.

East Prairie (5-2) failed to convert all three two-point conversions in the contest.

“Today they experienced almost every weather condition Missouri could throw at you,” Jamerson said. “They came out, played well, and answered the bell.”

While the Blackcats (1-6) were able to keep the Eagles’ offense out of the endzone the rest of the way, they could not get their offense going.

Not helping their cause, quarterback Evan Burrows hurt his shoulder on a hit early in the contest, preventing him from attempting a pass the rest of the way.

“I’m proud of my kids,” Fredericktown head coach Chuck Ford said. “We’re running out of bodies and putting kids in positions they’re not supposed to be playing. It’s been a struggle.”

Kaleb Walker and Hunter Hennen each had 50 yards to lead the Blackcats, Walker on 14 carries, and Hennen on 11.

In all, four Eagles ran the ball at least nine times to help East Prairie out-gain Fredericktown 259-90 in total yards.

“We like to spread the ball around on offense and try to put it in several kids' hands,” Jamerson said. “If they watch the film, people know what we’re going to do on offense.

“We’re just trying to be a little creative and break some tendencies, but at the end of the day, we’re going to run behind that line of our ours and churn up yards and tear upfield.”

The last time the Eagles shutout a team was Sept. 11 when they beat Portageville 46-0.

They ended two Blackcat drives on fumbles and never let them get inside the red zone.

Fredericktown’s best drive came late in the first half when they started on their 27-yard line and marched down to East Prairie’s 28. A turnover, however, swung momentum back into the Eagles’ favor.

“When their quarterback got banged up, we knew that’d probably made them more one-dimensional,” Jamerson said. “That worked out in our favor. Up to this point, they’d showed us a completely different offense. They came out tonight and threw a curveball at us. Our kids adjusted well.

“It’s nice to get a shutout. Recently we’ve been trying to figure out our way more on defense. Losing Hayden Ellis always hurt, but our kids stepped up and played big tonight. Wyatt Williams, Andrew Owens, Clark Thurmon, and Garrett Blake, those guys played well.”