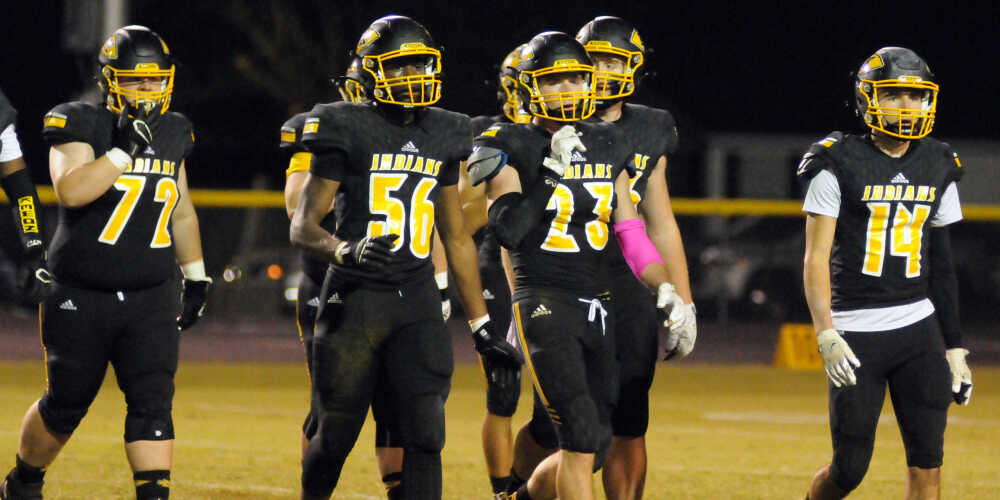 Photo by Dustin Ward, staff
The Kennett football team heads off the field earlier this season.
Order this photo

ABOUT SIKESTON: Sikeston beat Caruthersville 17-6 in Week 1, Sikeston beat Dexter 28-21 in Week 2, Farmington beat Sikeston 25-7 in Week 3, Poplar Bluff beat Sikeston 30-9 in Week 4, Jackson beat Sikeston 71-0 in Week 5, Cape Central beat Sikeston 28-19 in Week 6, Potosi beat Sikeston 39-25 in Week 7, and NMCC beat Sikeston 64-34 in Week 8. NMCC moved the ball 382 yards in the air last week as it collected its first win against Sikeston in 11 years. Sikeston found some success through the air this season, behind sophomore quarterback Joseph Heckemeyer. Last week, against New Madrid County Central, Heckemeyer threw for 187 yards on 12-of-31 passing, one touchdown, and two interceptions. Those numbers brought his season total to 967 yards passing, on 69-of-160 passing, and seven touchdowns. Struggles surrounded Heckemeyer’s weapons at the start of the year, as he managed to throw for 100 yards twice through the first five games while only completing 29 of his 74 passing attempts (39 percent). However, since Week 6 against Jackson, everything has seemed to flip for not only the quarterback but the receivers. Heckemeyer has over 150 yards in two of his last three games and a career-high 211 yards against Potosi in Week 7. Senior Daniel Lawrence has 180 yards receiving on 15 catches during this recent stretch to go along with one touchdown, while junior C.J. Posey has six catches for 121 yards and one score. Both Lawrence and Posey have over 200 yards receiving this season, with Lawrence accumulating a team-best 281 on 21 catches. Posey has 237 yards receiving on eight receptions and two touchdowns. In the backfield, senior Lontas McClinton carries the bulk of the load for the Bulldogs. He has 72 carries for 413 yards and two touchdowns. He had nine rushes for 72 yards and a 27-yard touchdown last week against the Eagles.

HEAD TO HEAD STREAK: Malden has won the last eight meetings dating back to 2012