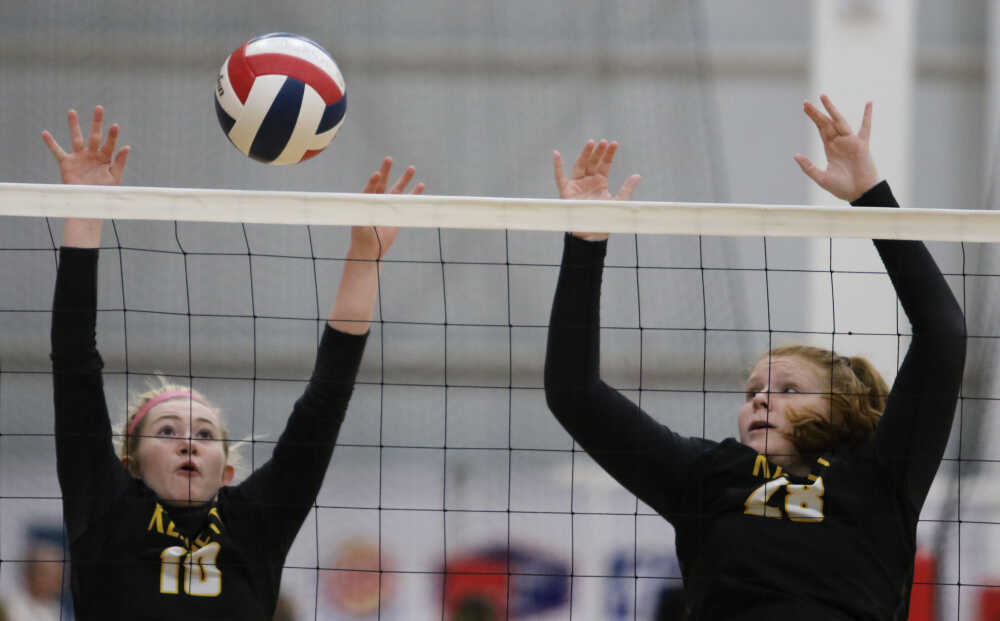 Kennett's Macy New (10) and Elle Vancil (28) put up a block during the SEMO Conference Tournament pool play Tuesday at the Cape SportsPlex in Cape Girardeau.
DAR/Brian Rosener
Order this photo

CAPE GIRARDEAU — The SEMO South is 0-for-forever in getting a team into the semifinals of the conference volleyball tournament.

Kennett earned the top seed out of the South pool Tuesday by sweeping all nine sets against Scott City, Oran and Charleston.

The Indians will face Poplar Bluff, the fourth seed from the North pool, at 5 p.m. Thursday in the quarterfinals of the SEMO Conference Tournament at the Cape Girardeau SportsPlex.

Since the conference tournament started under the current format in 2015, the North has dominated bracket play and no South team has advanced.

“Sometimes in our area we’re looked upon as maybe not as strong,” Vancil said. “But we have the talent here this week.”

For much of the season Kennett has been missing up to three starters due to illness, injury or quarantine. But the entire staring lineup has been back for over a week now, Vancil said, as the Indians gear up for the postseason.

All matches started tied at 6-all and were three sets since New Madrid Central dropped out due to COVID-19 issues.

In the final match between Scott City and Kennett, the Indians jumped ahead with an ace and led by five early. The Rams rallied with a 6-1 run, getting consecutive aces from Jersey Black for a 22-21 lead.

Kennett retook the lead on a kill by Elle Vancil off a set by Anna Vancil. Melena Green then passed to Anna Vancil, who set up Green for a kill to bring up set point. Green ended a long rally with a spike off a block by the Rams to take the set 25-22.

“They looked excellent and we were struggling,” Coach Vancil said of the Rams in the first set.

“The second and third set we kept them on defense and that’s what we have to do to win games.”

Kennett wrapped up the top seed by taking the second set 25-14 and led the tire third set in winning 25-17.

“Overall I thought we would do better than that,” Riley said, adding communication and trust issues held back the Rams at times.

Oran edged Scott City in the middle set after the teams were tied eight times.

Bralynn Morgan’s ace gave Oran a set point but Black answered for Scott City with a kill in the middle. Kennedi McVay got a kill and closed out the set with an ace.

With points as one of the tiebreakers, Oran’s Laney Shy made a diving attempt to save the ball on set point in the third against Scott City when she crashed into the bleachers. The sophomore was slow to get up but was able to start the next match against Kennett.

“I was scared for a second,” said Oran coach Amy Wibbenmeyer, who has just seven players on the roster.

“I didn’t know what we would do if we lost her because she’s a setter and she touches the ball almost every single time it comes on our side.”