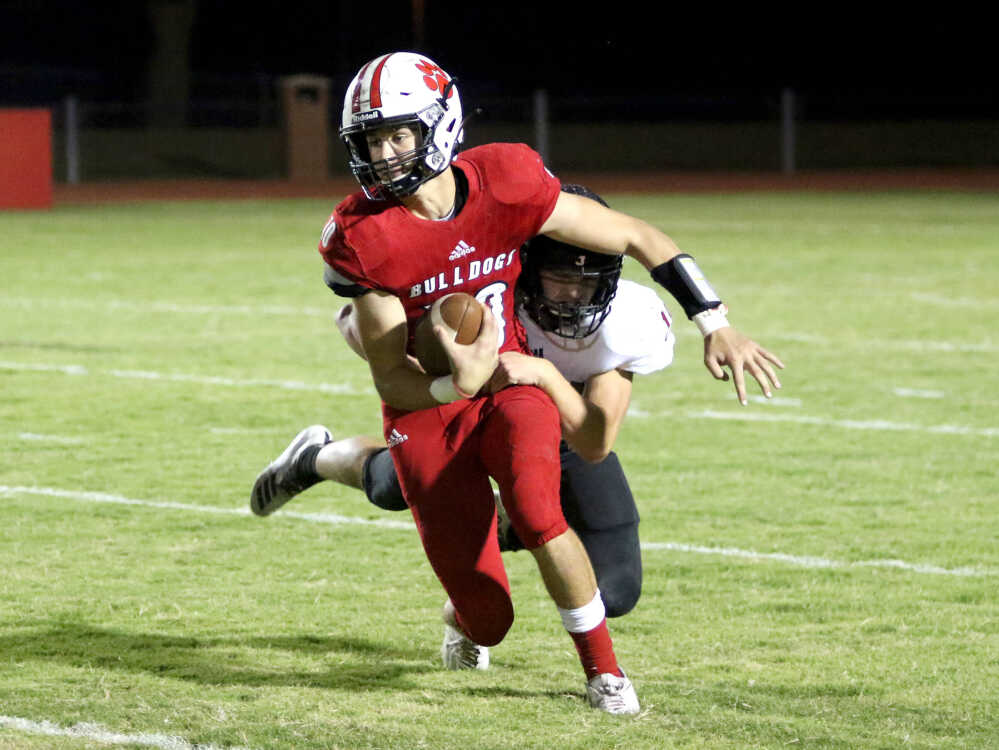 Notes: The schedule hasn’t been kind to NMCC in recent weeks. In the last three games, the Eagles have faced three state-ranked teams, losing to all of them. History isn’t on the Eagles’ side in Week 8 either, as they take on Sikeston on the road. The Bulldogs have won the last 11 matchups against the Eagles, with NMCC’s last win coming 2008, 40-29. Running the football is New Madrid County Central’s strength. The Eagles' backfield features senior Quazavion Jackson, who has 690 yards on 89 carries and has reached the end zone 11 times. He isn’t alone, though, as junior Corvell Williams has played well in the backfield as well. Williams has 464 yards rushing on 73 carries and six touchdowns this season. A ground-and-pound style of play isn’t the only thing the Eagles are doing well this season, as they can also throw the ball effectively. Quarterback Matt Riley is having a good year behind-center, and last week threw for 230 yards on 6-of-13 passing, with two touchdowns. Riley has thrown for 1,300 yards on 53-of-101 passing, 14 touchdowns, and six interceptions. His top target is Ken King, who last week caught one pass for 76 yards and one touchdown. Those numbers brought his season totals to 528 yards on 21 catches. Shamar Williamson also had another big week, catching five passes for 170 yards and one touchdown. Williamson's emergence in the last three weeks now gives Riley another weapon to utilize within the offense. For Sikeston, sophomore quarterback Joseph Heckemeyer had a career-night last week against Potosi. He threw for 211 yards, on 22-of-31 passing, and two touchdowns. So far this season, Heckemeyer has 780 passing yards on 57-of-129 and six touchdowns to two interceptions. Senior Daniel Lawrence caught six passes for 60 yards and one score last week, while junior C.J. Posey had four catches for 56 yards. Lawrence is the leading receiver on the team, with 20 catches for 271 yards and two touchdowns, while Posey has 10 receptions for 228 yards and one score.

Notes: Freshman Mason Adams has been a pleasant surprise for Portageville this season. He has thrown for 605 yards on 32-of-52 passing, nine touchdowns, and three interceptions. On the outside, Adams has targeted three individuals the most in the last two weeks. Junior Alex Winsor has caught 13 passes for 273 yards and two scores, while senior Cameron Hollingshead caught five passes for 105 yards and three touchdowns against Chaffee in Week 6, and sophomore Trey Benthal, two catches for 56 yards in Week 7. Riding a two-game winning streak, the Bulldogs will look to head into Benton on Friday night with an upset on their mind. Running the football is how the Hawks are going to win games. Senior Evan Urhahn has totaled 834 yards on 108 carries and 12 touchdowns this season, while junior Bryce Phelps has 293 yards on 24 carries and six scores. Senior Bryce Morgan has had a strong season, so far, at quarterback, with 888 yards on 59-of-97 passing and 10 touchdowns to three interceptions. His main target is junior Gavin Jansen, who has 290 yards on 26 catches and three touchdowns, while junior Ty Powers has 261 yards on 11 catches. Senior Drew Dirnberger also had a good performance against Hayti in Week 7, finishing with three catches for 52 yards. Defensively, senior Keaton Fitzgerald leads Kelly with 63 tackles and eight tackles for loss, while senior Alex Swope has 53 tackles, two for loss, one forced fumble, and one interception. Dirnberger also provided a burst on defense for the Hawks in Week 7, finished with 16 tackles, while Phelps had eight tackles, one interception, and one fumble recovery. Altogether, Kelly is holding opponents to 1,338 yards of total offense, with its run defense being the strongest part of the unit. The Hawks have allowed 712 yards on the ground this season and six rushing scores.

Notes: East Prairie returns to the field after a two-week absence due to a positive COVID-19 test. The last time the Eagles were on the field, they fell to Kennett 51-6 and now face Caruthersville in, what is, their Week 6. Bodey Ellis had his way with East Prairie on Sept. 25, scoring seven touchdowns. He threw for five and completed 14 of his 17 passes for 254 yards while rushing for two scores on 10 carries and 151 yards. The Eagles are off to a 3-2 start and are winning by running the football. Junior Hayden Ellis leads the team with 555 yards on 74 carries and five touchdowns. Senior Lucas Moore adds 256 yards on 61 carries and four scores, while senior Gaige Gifford has 169 yards on 27 carries and two touchdowns. Jase Aycock added the only touchdown for the Eagles against the Indians and finished with 45 yards on five carries.