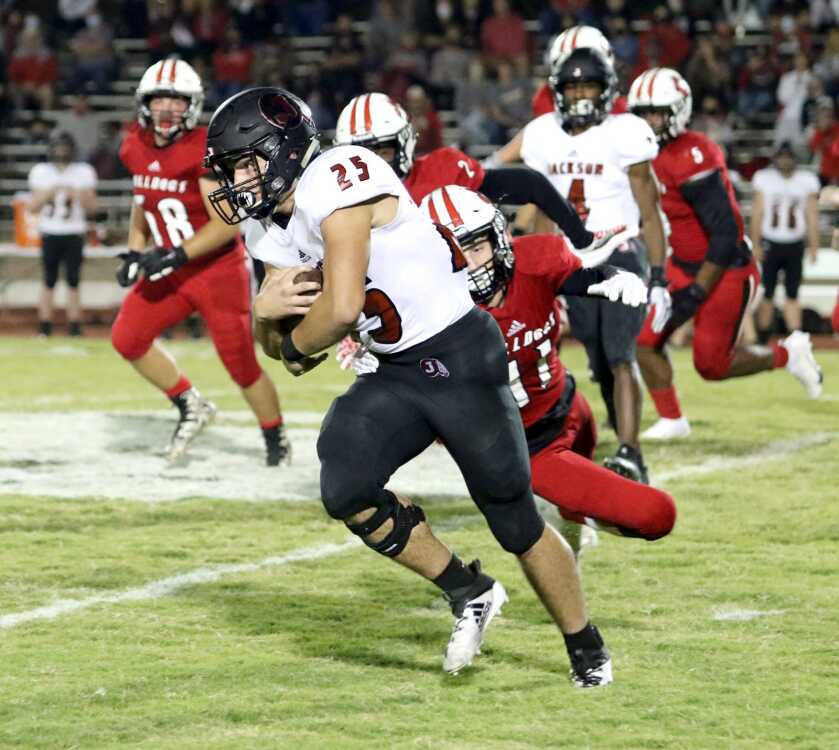 SIKESTON — It was all Jackson from start-to-finish on Friday night at Sikeston Public Schools Stadium.

The Indians scored on their first six drives in a 71-0 blowout of Sikeston for their 26th-straight regular-season victory. On the other hand, the Bulldogs dropped their third consecutive game after winning the first two contests of the season.

Coming out of the gates hot, Jackson only needed two plays to start the game before finding pay dirt.

Sophomore Marquis Eckley caught a short screen pass on the Indians' first play of the game for six yards, and senior running back Daniel Dickerson did the rest, as he ran for an eight-yard touchdown to put the guests up 7-0 with 10:04 left in the first.

Entering the contest with the No. 3 ranking in Class 5, Jackson flexed their muscles the entire night. On their second drive of the evening, junior wide receiver Kannen Turley scored on a 14-yard run to cap off the drive and make it 15-0.

Then, on Sikeston’s next drive and the football at the 20-yard line after a touchback, senior Daniel Lawrence created one of the few positive plays for the Bulldogs, after rushing out to his left. He couldn’t find any room to work with, though, and reversed to the other side of the field for a 25-yard gain and one of the Bulldogs three first downs.

As the Bulldogs were moving into positive territory, though, junior linebacker Ryley Styer found himself uncovered and delivered a punishing hit to Sikeston sophomore quarterback Joseph Heckemeyer that ended with him fumbling the football. The Bulldogs came away with the recovery, though, and continued the drive.

After punting the football away, Jackson ended the first quarter with another score, as Dickerson added a goal-line touchdown to make it 23-0, with 17.5 seconds remaining.

The onslaught continued in the second quarter as well.

On Jackson’s first drive of the period, it only needed four plays, after sophomore running back Tony Williams finished with a 15-yard run to make it 30-0 with 10:19 left.

Ending the first half, the Indians finished with a 28-yard touchdown from senior wide receiver Ty Moran and a 31-yard reception by Turley, that totaled six plays. Jackson headed into the locker room, recording 30 plays offensively.

Without the services of senior signal-caller Cael Welker, Jackson didn’t miss a beat. Junior Cameron Marchi threw for 143 yards on 8-of-11 passing and two touchdowns.

“We were just outmatched physically,” Flannigan said. “Size-wise and everything else. They’re a good ball club, and it’s why they went to where they went last year and why they’ll probably be back there again this year.”

One area that the Bulldogs continue to have problems with is converting on third down. Sikeston hasn’t had a successful third-down conversion since the second quarter of Week 2 against Dexter.

They will look to right that, next Friday when the Bulldogs play Class 4, District 1 rival Cape Central in Cape Girardeau.