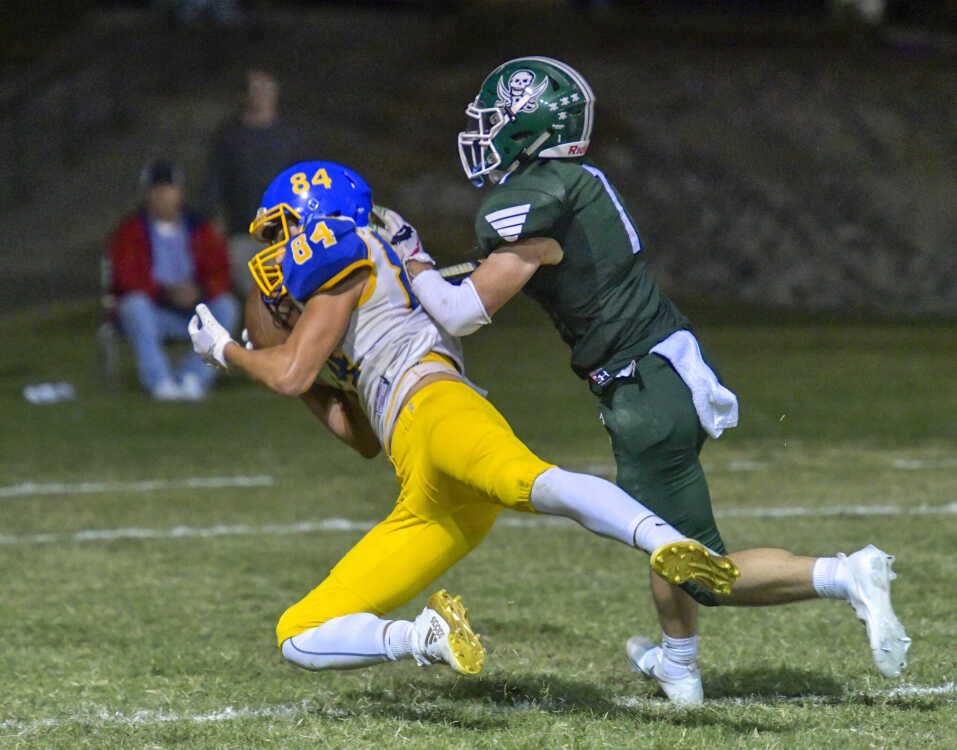 St. Vincent wide receiver Phillip Ernst falls into the end zone after making a catch for a touchdown against Perryville Friday in Perryville.
Sarah Yenesel ~ Southeast Missourian
Order this photo

PERRYVILLE - On the first offensive play from scrimmage Friday between rivals St. Vincent and Perryville, Indian senior quarterback John Wibbenmeyer found junior wide receiver Jacob Kapp for a 37-yard gain. The play would serve as a precursor on how the night would go for the Pirate defense.

That unit was solid throughout the night, but every so often St. Vincent would break through and complete a big play.

The Indians got enough of those types of plays to prevail 21-7. The victory was the third consecutive in the series for third-year St. Vincent coach Tim Schumer.

"Anytime it is the Perryville game it is sweet," Schumer said. "But anytime you can get a victory on a Friday night, especially this year with it being so crazy, it is special."

The Indians (2-1) didn't score on that first offensive series, but they did on the next, as St. Vincent senior wide receiver Phillip Ernst exhibited his ability and ultimately would do so all night long.

On a slant route from midfield, Ernst caught a pass from Wibbenmeyer and began tearing through the heart of the Pirate secondary. One Perryville defender tried to bring him down only to be straight-armed to the ground as the 6-foot-4, 200-pound athlete kept rumbling down field.

He was eventually brought down on that play but would score on a fade route (remember this play) into the end zone with 6:27 left in the opening quarter for a 7-0 St. Vincent lead.

"They've got a tall kid who can go up and get the ball," Perryville coach Blane Boss lamented.

Ernst was a physical mismatch against even nice Pirate coverage all night long.

"He hasn't really played since his freshman year because of injury," Schumer said of Ernst. "We were very excited to get him out here. He showed up tonight and showed up great."

Perryville played well at times -- on both sides of the ball -- throughout the remainder of the first half.

Defensively, St. Vincent couldn't mount a serious scoring threat, while offensively, the Pirates began to get on track in running the ball.

Pirate senior Dylan Holt burst through for a 12-yard gain midway through the second quarter to the Indian 16-yard line, before really breaking through, this time to the end zone, to tie the game at seven with 7:14 remaining in the half.

"The defense kept us in the game and did what they needed to do," Boss said.

That defense was stout, but the Indian offense was opportunistic.

With 6.5 seconds remaining, Wibbenmeyer found a streaking Blake Schnurbusch cutting across the middle for a catch and after making one Pirate miss, he was able to reach the end zone for a 14-7 lead going into the intermission.

"We did a great job in coverage," Boss said, "except for maybe once or twice."

An ominous sign for Perryville had occurred just seconds before Schnurbusch's score, as Perryville senior quarterback Evan Daugherty was injured on the Pirates' fourth down when he was tackled.

"I don't know if he took a shot to his (right) knee," Boss said, "or he landed on it weird or what. He was basically playing on one leg in the second half."

That showed, as several of Daugherty's throws were just off target to open Pirates. In addition, Daugherty is an effective run threat, and that aspect of his game was limited over the final 24 minutes, as well.

The game was a defensive struggle throughout the second half before the Indians went back to their early success and hit Ernst on a slant again.

St. Vincent got a first down run from Evan DeWilde with less than four minutes remaining and then Schumer called Ernst's number on a fade route to the left side of the end zone and he made a spinning, leaping, ballet-like catch to "ice the game," as Schumer said.

"He had a hecuva game for us," Schumer said.