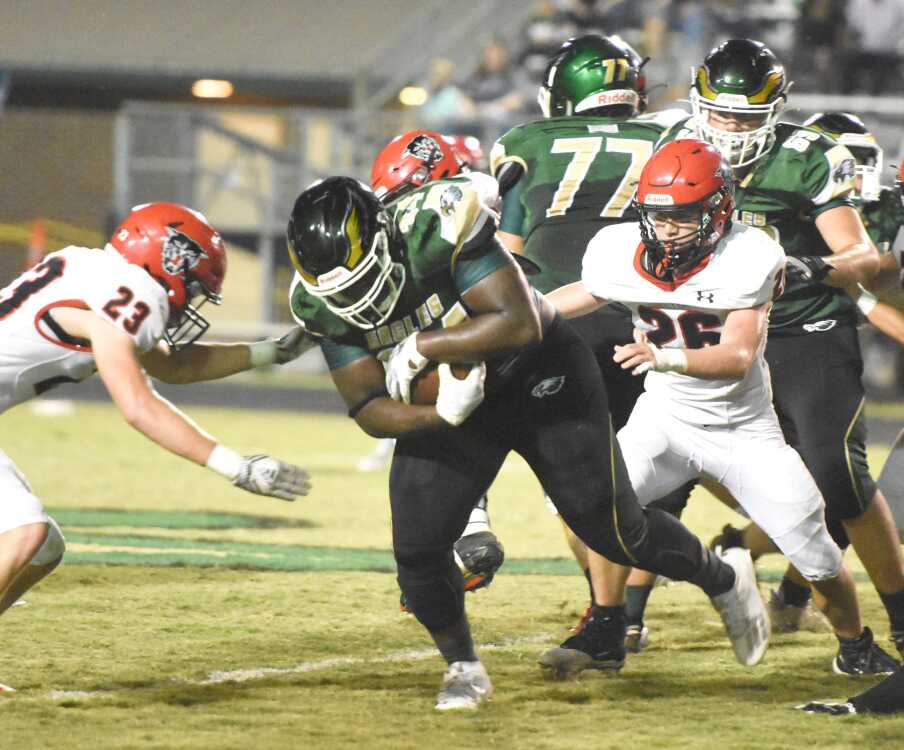 A week after gaining only 5 yards on 18 carries, the Eagles dominated Dexter up front, produced 345 yards of rushing on 40 carries and rallied for a 40-20 SEMO Central Conference victory Friday night.

“That was the game plan to come out and try to establish (the run),” NMCC coach Tyler Fullhart said. “Last week, I didn’t think we were very physical. This week, I thought we matched the physicality and played well up front.”

Williams rushed for 181 yards on 22 carries and scored three touchdowns, including two in the second half when the Eagles finished off Dexter who didn’t score a point after intermission.

“Hat’s off to the offensive line,” Fullhart said. “That’s who helped road grade. Proud of them.”

“It wasn’t as much of giving up big plays, but the types of plays we were giving up,” Dexter coach Aaron Pixley said. “We’ve done a good job against those inside runs the first two games of the year. For whatever reason, we didn’t do a very good job. We weren’t very disciplined on defense tonight.”

The Bearcats produced only 209 yards of total offense after posting 300 or more yards in each of the past two games.

Quarterback Josh Alday threw for 65 yards on 7-of-25 passing, including one interception.

Taylor Condict rushed for a team-high 62 yards on 14 carries.

The Eagles struck first on a 60-yard run by Williams only 1:20 into the game. Skyler Price kicked the extra point for a 7-0 lead.

“Whenever you play against talented teams (and) they can score from anywhere on the field,” Pixley said, “you have to be disciplined and you’ve got to make sure you do your job correct and we didn’t do that all the time.”

Dexter answered with a 61-yard scoring drive, capped by a 25-yard touchdown pass from Alday to Ryan Collier. Jacob Medler’s extra-point kick was off target, allowing NMCC to maintain a lead, 7-6 with 3:32 left in the first.

“We kept shooting ourselves in the foot a little bit,” Fullhart said. “They would find holes in our defense. Coach (Jake) Kimball did a good job adjusting and figuring out what they’re trying to do. I thought our defense picked it up and played well.”

NMCC’s next drive ended on Braxton Greenfield’s interception of a Matt Riley pass. Greenfield returned it from near midfield to the NMCC 34-yard line.

Condict broke free for a 26-yard run on second down, giving the Bearcats possession at 9.

Dexter gained 5 yards on the next three plays. On fourth down, Alday connected with Collier at the 1, and he used a spin move to cross the goal line for a 4-yard touchdown. Alday and Alex Townsend teamed to score the two-point conversion, and the Bearcats led 14-7 with 34 seconds left in the first.

Making his first appearance in the game, Jackson ran 29 yards to give his team possession at the 9. He scored on the next play. The two-point conversion pass failed and the Bearcats’ lead slipped 14-13 with 10:58 left in the half.

The Bearcats used a short field to extend their lead. After a low punt by NMCC resulted in a 5-yard loss, they began their next possession at the NMCC 36.

Dexter took advantage on a pass interference penalty for a first down at the 21.

An encroachment penalty by the Eagles and a 2-yard run by Alday gave Dexter third and 2 from the 13. Peyton Driskill caught a 10-yard pass from Alday, and Alday scored on a 3-yard quarterback keeper with 2:33 left in the second. The two-point conversion failed and Dexter led 20-13.

On NMCC’s next play from scrimmage, Jackson broke loose for a 76-yard touchdown run and Price’s kick tied the score at 20 with 2:12 to play.

Dexter went three-and-out on its next possession, and Jackson produced runs of 14 and 1 and Williams gained 12, giving the Eagles a first-and-goal at the 8. Williams followed with an 8-yard touchdown run, and after Price’s extra point kick, the Eagles led 27-20 with 31 seconds left in the second quarter.

The Eagles secured the win after Kannon Nowell intercepted an Alday pass and returned to their own 45. Three plays later, Williams raced 49 yards for a touchdown and 40-20 lead with 3:30 to play.