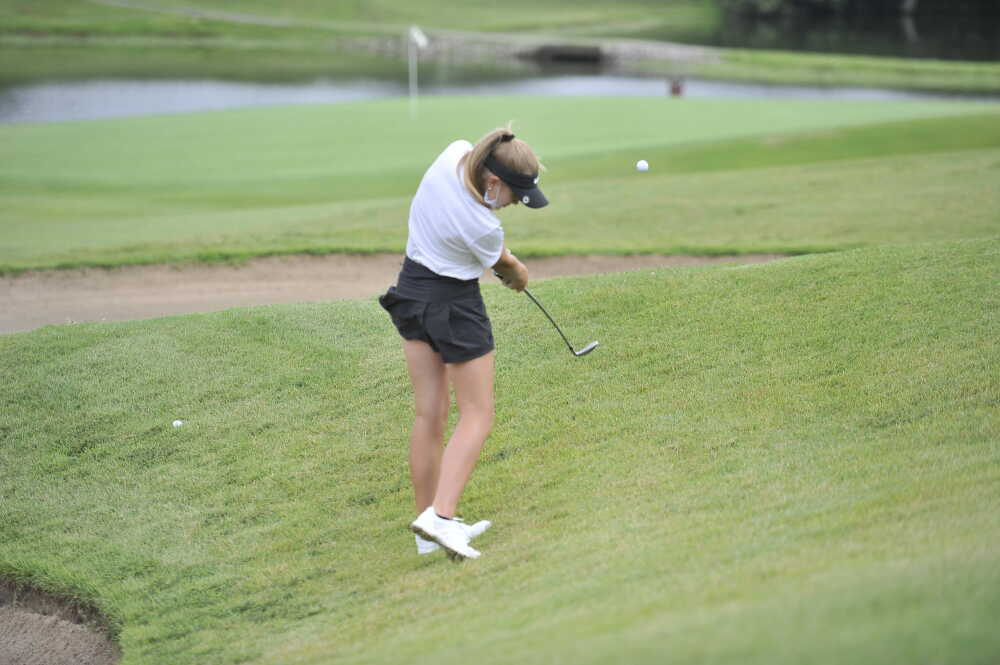 Jackson freshman Alana Gilbert hits a chip shot near the green on hole No. 9 at Kimbeland Country Club in Jackson, as the Indians were playing in a three-way match with Notre Dame and Ste. Genevieve.
Tom Davis ~ Tdavis@semoball.com

It wasn’t that long ago that the Jackson girl’s golf team was the hunter. Fast-forward to the Indians’ fourth season in existence and now the rest of Missouri knows all too well what Jackson is capable of doing on the golf course.

The Indians dominated a three-way match Tuesday at Kimbeland Country Club by scoring a 166 to top Notre Dame (207) and Ste. Genevieve (241).

How impressive was Tuesday’s performance?

Jackson didn’t have All-State golfer Ella Overstreet playing due to not having completed the required number of practices due to her competing in the recent Rolex Girls Junior Championship at Dalhousie Golf Club.

Though Jackson was down one great golfer, it wasn’t down two, as Overstreet’s junior classmate Kaydi Rhodes earned medalist honors with a nine-hole score of 37 (two-over-par).

Rhodes opened her round with a pair of birdies and ultimately shot par or better on five of the nine holes.

“All of the girls need work on the short games,” Korbecki said. “Even our top girls can always improve in their short games.”

Korbecki said the emphasis in practice sessions has been “pretty broad,” but she did note the importance of putting for each of her players.

“We’ve talked about how you can hit the ball 200 yards,” Korbecki said, “but if we can’t get it on the green and putt in one or two (shots), that is where we are going to add our strokes.”

Rhodes and Overstreet tied for 21st overall at last year’s MSHSAA Class 2 State Championship and both competed in prestigious events throughout the country this summer in preparation for this season.

The depth of Jackson was on display, as it had seven golfers shoot rounds of 47 or better.

Jacie Pattengill trailed Rhodes with a 41, but more impressive was her resilience.

Pattengill shot four-over-par on holes one through three but was just two over par on the remaining six holes.

Kasie Saysanan (43) and Maggie Davey (45) were also solid, as were Indian freshman Alana Gilbert and Emma Summers, who each totaled a 47.

“The focus right now is to stay healthy,” Korbecki said, “so we can keep playing our season. But also, we have that drive to get back to the state tournament as a team. In the back of all of our girls’ heads, that is what their goal is for this season.”

Jackson advanced to the state final as a team for the first time in its brief program history last fall and finished third overall.

Notre Dame was paced by Paige Compardo, who shot a 40.

Compardo notched par on five of the nine holes.

“Today was our opportunity to see where we stand,” first-year Bulldog coach Kirk Boeller said. “For me, it was kind of my first time seeing these girls in a match setting.”

Avery Bader chipped in a round of 53 for Notre Dame, while Sydney Seabaugh (56), Kathleen Johnson (58), Jordan Pappas (60), and Elise Edwards (67) also contributed.

“I took little things that each girl can improve on,” Boeller said.

All three squads that played at Kimbeland Tuesday will visit Farmington today at 3:30 p.m. to play at Crown Pointe Golf Club.