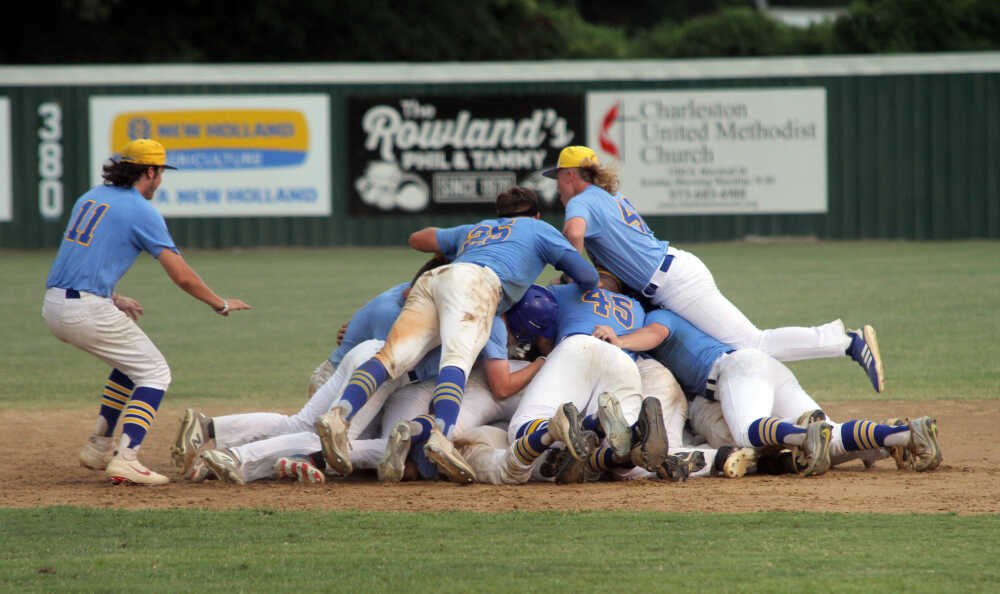 “What a baseball atmosphere tonight, first off,” Charleston head coach Michael Minner said. “I’m so proud of Babe Ruth baseball and, tonight, for two great teams that have been good the last three years, to play a 3-2 ballgame and in front of probably 500 fans, it was just an electric atmosphere.

“We’ve met our team goal — to win a state championship.”

Finishing the season at 36-3, the Fighting Squirrels won in more ways than one. On Monday, though, it wasn’t a game filled with runs, but instead, a game that went down to the final at-bat.

Having the right guy at the plate at the right time is how Minner characterized the situation.

To start things off in the bottom of the seventh, Gabe Hurley laced a double to left field. He finished with two hits on the evening, with none bigger than his extra-base hit in a clutch situation.

“I was looking for a fastball to hit,” Hurley said. “I got a fastball, but then he [Chase Dembowski] threw me a curveball, so I just took my stride, sat back, and he gave me the pitch I wanted.”

Lane McLevain would then draw a walk to advance Hurley into scoring position, while Carter Heuring then laid down a bunt attempt. However, instead of moving both runners up one base, Tropics’ first baseman Peyton Eftink played the bunt well and threw the ball to third for the force, and first, out of the frame.

With the top of the lineup nearing, Ajay Sager knew he had to get on base any way possible, and he did just that. He was hit by a Dembowski offering to load the bases with the top-of-the-order coming up.

Sitting at one ball and two strikes, Justin Moses found himself behind in the count, and on the very next pitch, the leadoff man check swung at the offering from the Tropics hurler, which led to a decision by the first base umpire. The umpire said that Moses went around, forcing a strikeout and the second out of the frame for the Tropics.

One out away from getting out of a jam and possibly momentum swinging to the opponents' side, former Sikeston Bulldog Payton Howard did not want that scenario to happen.

Instead, the Saint Louis baseball signee had other ideas on how he wanted to end his final at-bat.

On the third pitch he saw, the speedy centerfielder took the ball the opposite way, and as it landed, McLevain touched home for the game-winning run, while Howard was mobbed by his teammates between first-and-second base.

An ending that capped off a dominant season for the Fighting Squirrels.

“I felt like I was stinging the ball well all day,” Howard said. “That last at-bat, I just wanted to try and not do too much, put a good swing on the ball, not try to hit the ball over the fence or anything. I wanted to hit a ball hard somewhere, and that’s what I did.”

Howard finished 2-for-4 with his lone RBI being an all-important one.

Despite late-inning heroics, pitching on both sides didn’t go unnoticed on this night.

On one end, the Tropics sent Dembowski to the bump to force a second game with the winner coming away with a state title.

Then, for the Fighting Squirrels, there was Marshall Brown.

Brown pitched a full seven innings, giving up eight hits and two earned runs while also striking out six batters. He threw 87 pitches, 70 percent of which were strikes.

“Dembowski was phenomenal,” Minner said. “We feel like we have a really good lineup, and he held us at-bay. We finally broke through there late, and a lot of that was because Marshall Brown held them down. A tremendous effort by that young man. He had three pitches working tonight, his velocity was good, he made big pitch after big pitch.”

Brown added that he was trying to mix in pitches to keep the opposition off-balance, while also pounding the strike zone to put the pressure on the batter, both of which he did.

Overall, it was a summer filled with uncertainty, and, all in all, Minner said that he was happy to have baseball, despite the circumstances.

“It was a great summer,” Minner said. “For everything that has gone on with COVID and stuff, for us to finish up here at Hillhouse tonight, with this atmosphere is just phenomenal. I can’t say enough.”