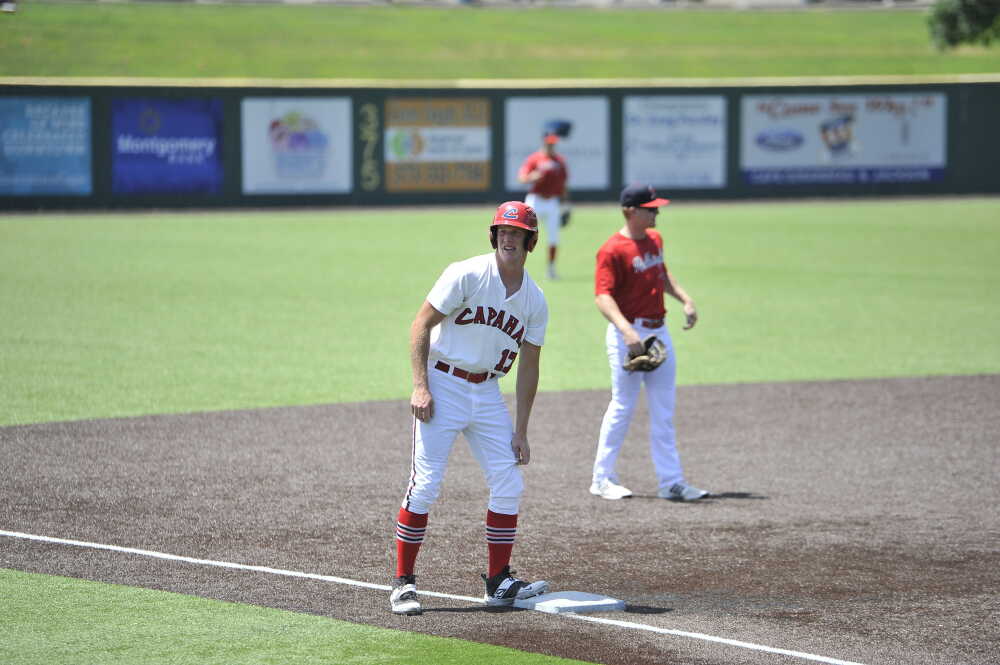 Austin Bucher (17), seen here in a contest at Capaha Field, had a home run for Tom Bolen's Capahas Saturday, as Cape Girardeau defeated the Lakers in Valmeyer, Ill., 7-2, to improve to 9-3 on the season.
Jeff Long ~ jlong@semissourian.com

The Cape Girardeau Capahas, the oldest amateur team in the United States, proved over the weekend it can win on the road as well as at home.

In the Saturday contest, Leopold’s Austin Bucher stroked an 8th inning home run and the Glidwell brothers combined to hold Valmeyer to five hits over seven innings as the Caps defeated the host Lakers.

The Capahas and Lakers were scheduled for a Saturday doubleheader but due to the extreme heat, agreed to play one nine-inning game instead.

Caps manager Tom Bolen, in his fourth season, praised the work of his hurlers.

“The pitching staff is competing well, giving us a chance to win,” said Bolen, noting the only one Lakers’ run was earned.

Trent Glidwell went three innings for Cape Girardeau while his brother, Brant, who got the win, followed with four innings of work. The brothers pitch for SIU-Edwardsville.

“(Martin) came in and it was six up and six down,” said Bolen.

At the plate Saturday

Trent Pobst of Scott City, a student at Williams Baptist, had the only other extra base hit for the Caps, a double.

Bobby Wright of Bell City, a student at Crowley’s Ridge and Dee Triplett of Ste. Genevieve, who plays at Mineral Area College, had multiple hits for the Caps, who played their first game in 1894.

Bolen said his entire roster is getting playing time.

“We don’t have a big bench,” said Bolen, “(because) we carry only two extra ball players on the squad.”

Chaffee’s Landon Tenkhoff, a student at Jefferson College, hit a walkoff three-run homer to lead the Caps over Waterloo in game one, 11-8.

It was a measure of sweet revenge for Bolen’s squad, as the Millers took a doubleheader from the Caps earlier this month at Jackson Indians Stadium.

The Caps return home next weekend with a Friday game versus Saline County (Ill.) at 7:15 p.m. in Jackson.

On Saturday, the Caps are slated for a doubleheader at Capaha Field against the St. Louis Printers.