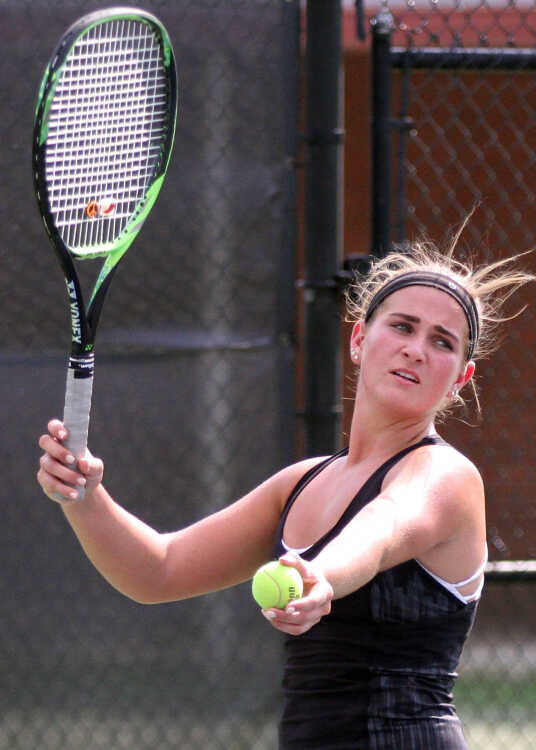 Harris, who played in the No. 5 spot on varsity as a freshman, was asked to move up to the No. 1 spot entering her sophomore campaign.

“I was a little nervous coming into the season,” she said. “I had to take on a bigger leadership role because we graduated our top four varsity players the year before. That added a little more pressure. But I expected a lot from myself and wanted to win every day.”

Harris did win every way most of the way. Harris put together a perfect record in singles play during the regular season and qualified for the Class 1 state tournament in singles.

“At the beginning of the season I honestly did not expect to do that,” Harris said. “It’s a nice ultimate goal. But I didn’t necessarily go in expecting to do that. But I wanted to win and ended up having a great season.”

Harris finished her 2019-20 campaign with a 28-2 record in singles. Her only two losses were final matches of the season at the Class 1 state tournament at Springfield.

“She had a great sophomore season,” Kennett longtime girls tennis coach Janet Hilburn said. “She had high expectations and as a coach I wanted her to do well. Jumping up five spots forced her to work hard and make several adjustments. She excelled at a very high level and I’m very proud of her.”

Harris was honored for her outstanding season Saturday night when she was named the 2020 Girl's Tennis Athlete of the Year at the annual Semoball Awards.

“I’d like to thank my coaches because they are the main reason I have been able to experience success in tennis,” Harris said. “Janet Hilburn and Hanna Lack have always pushed me to be my best. I would also like to thank Brent Carr for working with me individually. These three coaches are amazing and I am so blessed to have all of them help me with tennis and in my general life. I’m also thankful for our school and community for providing such strong support to our tennis program,”

“All of the schools had pretty consistent No. 1’s,” Harris said. “I had some pretty competitive matches against them.”

Harris said her most competitive singles match within the conference was against Bruendermann.

“I was playing her in Kennett and she was up 5-2 and I came back and beat her 8-6,” Harris said. “That was a pretty good comeback for me.”

Coach Hilburn says the key to Harris’ breakout sophomore season was changing her mental approach on the court.

“She had the strokes and the game,” coach Hilburn said. “But I had to work with her on her mental approach because that’s a big part of tennis.”

Harris echoed the thoughts of her head coach.

“I think the biggest thing that improved from my freshman to sophomore season was my mental toughness,” she said. “I sometimes struggled to stay mentally tough during tough matches my freshman season. My sophomore year I really pulled my head together and found ways to focus and come from behind when I got down.”

“We’ve had girls as finalists every year,” said coach Hilburn, who has coached Kennett to 13 straight district titles. “It’s a great honor for our program. We’ve got a program with a great tradition down here. The girls work hard and enjoy the challenges each season. Winning the award shows there are good things happening within our program.”

With two years of high school tennis left to be played Harris remains in contention to become the first student to be named Girls Tennis Athlete of the Year three times.

“I think she has a great outlook,” coach Hilburn said. “We’ve already set goals for her junior season. Everybody is going to be looking to beat her so she will have to improve. She’s been working a lot on her own this summer because she knows the pressure is on because she had such an outstanding sophomore season. Right now she is progressing great.”

Harris is currently working on becoming a more aggressive player with the start of the 2020-21 season less than two months away.

“I would like to build upon this and develop more power shots instead of trying to just play consistent all the time,” Harris said. “I also want to take more risks and charge the net more often.”

• Sportsmanship Athlete of the Year - The Class of 2020 spring athletes

• The Bank of Missouri Female Scholar-Athlete of the Year - Kennedy Theis, East Carter

• The Bank of Missouri Male Scholar-Athlete of the Year - Joe Panagos, Scott City