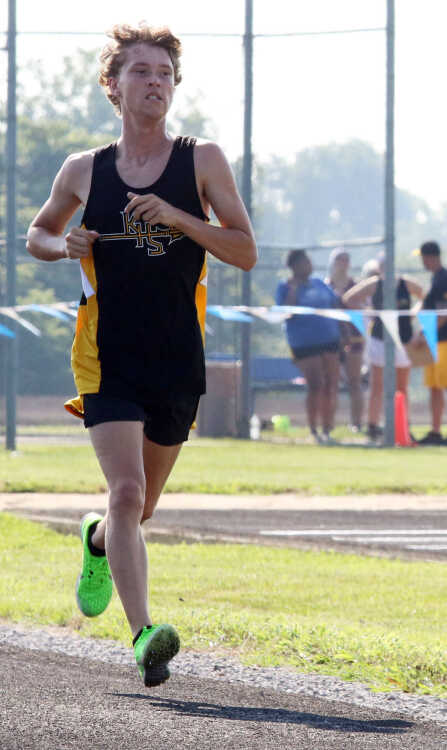 “The numbers have grown every year since I’ve been part of our program and it’s been so much fun to be a part of this track thing,” Webster said. “It’s like a family thing for us. We love each other and take care of each other. I’m really thankful I had a final chance to be around some of these kids.”

Five Kennett seniors were among the participants at the SEMO Conference Track and Field Showcase at Notre Dame Regional High School in Cape Girardeau.

“Kobe has got to be one of the best distance runners Kennett has had in the last 30 years since Dalton and those guys were running,” Webster said. “He’s accomplished a great deal. He’s done so much for the Kennett track program. We wouldn’t have enjoyed the team success we have the last couple of years without him and some of our other distance runners. I cannot say enough about how good of a kid he is and how mentally tough he is.”

Kennett sprinter Larry Payne, who will be on the track and field team at Mineral Area College in Park Hills, Missouri, next year, finished first in the 400 (49.00). Payne narrowly missed breaking the school record of 48.1 seconds set by Jim Bankhead in 1963.

“Larry didn’t quite break the record but he got close,” Webster said. “To come out and run a 49 after three months off is spectacular. When he was at the 200 mark he was at 22 seconds. He was flying. If would have had a full season I don’t think there is any doubt he would have broken that record.”

“It was really good for those girls to get a final opportunity to compete,” Webster said. “It gave them some closure and put a bow on the end of their senior year."

Webster hopes his squad gets the opportunity to compete in meets more frequently in the upcoming school year.

“I hope things get back to normal soon because I’d like to see the continued growth of the track program,” he said. “I hope the virus doesn’t keep us away for another season because it means so much to these kids. We’ve got to have athletics because there are so many kids that come to school to be a part of something. It motivates them to make their grades. Athletics is a difference-maker for a lot of these kids and we’ve got to find a way to have them moving forward.”

See complete results for the meet at this link: Track Results