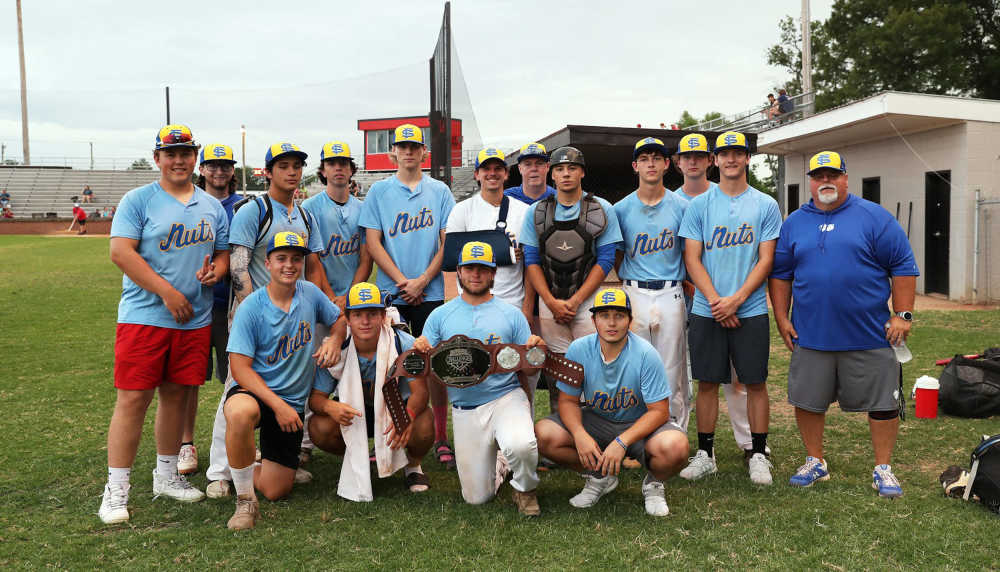 SIKESTON — After a week off, the Southeast Missouri Challenger Tournament concluded Monday at VFW Stadium in Sikeston.

Featuring the 18-and-under Charleston Fighting Squirrels and 17-and-under Perfectos, the Squirrels prevailed in six innings — as the game ended due to time limit — 4-3.

Sikeston’s own Dylan Thornbrough pitched the final three innings of the championship game. He gave up no hits and no earned runs while walking one and striking out four, none more significant than the final punchout of the game to Joel Koenig.

Despite coming up short in their final at-bats, the Perfectos didn’t go quietly in the final frame.

After Joey Holmes grounded out to start the inning, Jed Montgomery worked a five-pitch walk. Montgomery then advanced into scoring position on a passed ball and then again to third on a wild pitch before Tanner Dixon grounded out to Charleston second baseman Hayden Ellis, resulting in Dixon crossing home plate and making it a 4-3 contest.

Kade Lindgren followed that up by reaching on an error by the Charleston third baseman — which would have ended the game. Lindgren added some extra pressure to the Sikeston sophomore, though, as he stole second base and then advanced to third after an errant throw by the Charleston catcher that pushed the tying run just 90 feet away.

Staying composed, however, Thornbrough found himself in his element — the clutch.

“I pitch better when there’s stuff against me,” Thornbrough said. “I need to bear down and throw strikes, get outs and when the dugouts rallied up like that, it rallies me up.”

Charleston started off the game hot, scoring four runs in the first inning — which was all that they needed to win.

The first three batters for the Fighting Squirrels all reached base safely to start the game, as Ellis and Spencer Stratman singled and Skylar Morrison worked a walk to load the bases.

After Seth Jones struck out for the first out of the inning, Chase Sarabia tripled to clear the bases. Thornbrough then pushed Sarbaia across on a double, before Grant James and Ty Rommel ended the inning with strikeouts.

“Guy had a really good slider and I knew that he was going to get better as the game went on,” Charleston head coach Marty Young said. “We were selling out on the fastball, trying to pull everything and then he throws a slider and there’s a science lesson in there on the equal and opposite direction. He did a good job of making adjustments and we were trying not to sell out and swing on the fastball so hard.

“But, we jumped on him early, stayed with it, played consistent enough defense and threw strikes to get it done.”

For Sikeston Silver Sox general manager Craig Templeton, finally getting the chance to play the championship game of the tournament and crown a winner with the championship belt was what he wanted earlier, but Mother Nature had other ideas.

The tournament didn’t happen in 2019 because of rain as well.

“I thought the tournament turnout, fan participation and kid participation was great overall,” Templeton said. “We were very excited to get it in and we can’t wait to grow it even more next year and the years after.”