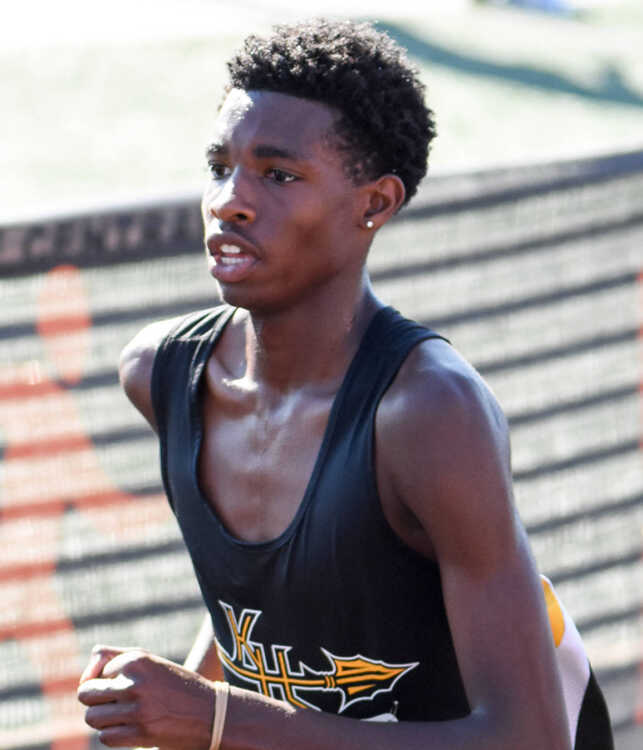 PROVIDED PHOTO
Kennett’s Larry Payne competes in a race in 2019.

Kennett track coach Andrew Webster thought senior Larry Payne was in a position to put together a record-breaking performance in the 400-meter dash when preseason practices got underway in March.

“When we started practice in March and everyone was still out of shape he was only about a second off the record,” Webster said. “If we would have had a full season and time to get in shape I think he would have broken it. But without a full season, I’m not sure what will happen now. But he might make a run at breaking it.”

Payne will have a final opportunity to break the school record next week. Payne is among the seniors from 22 schools competing in the 2020 SEMO Conference Senior-Only Track Meet July 8 at Notre Dame Regional High School in Cape Girardeau. The event was scheduled after spring track season was canceled due to the COVID-19 pandemic.

“It should help give senior athletes some closure,” Webster said. “Some of the kids are coming in out of shape but I think it should still be a competitive meet. I don’t know if the overall numbers will be as good as normal because of the long layoff but if an athlete has been training on their own they could still post a good mark, theoretically.”

The record Payne is attempting to break in the 400-meter dash was set in 1963 when Jim Bankhead posted a time of 48.1 seconds.

Webster said team practices have not taken place since March but some athletes, including Payne, have been training on their own.

“Since we graduated we haven’t gotten together as a team,” he said. “They’ve just been working on their own. I talked to Larry and he says he’s been running on his own some. He has been doing sprints on his own and jogging for some distance.”

Payne is one of nine Kennett seniors competing at next week’s meet.

“We had 26 seniors but four or five have left for the military and several others have entered the workforce,” Webster said. “But we are still sending several seniors that have a chance to put up good numbers.”

“He was a strong candidate to be all-state in the triple jump after placing 11th last season,” Webster said.

Payne, who will be on the track and field team at Mineral Area College in Park Hills next year, is competing in the 200-meter run along with the 400-meter run.

“I know he’s got a shot to get close to the school record in the 400-meter run,” Webster said. “I think it would be tough for him to approach the record in the 200-meter run. But you never know. He might get somewhere close to it.”

“He’s been a key part of our relay teams the last couple years,” Webster said.

Kennett standout running back Marsayv’aun Harrell is also slated to compete in the 100-meter run, 200-meter run, and long jump.

“This is his first year out for track,” Webster said. “This meet should be a great experience for him.”

“We’ve got a couple of our top throwers going on the girl’s side,” Webster said. “It will be interesting to see the type of numbers they put up.”

Coaches are slated to meet at the track at 7:45 a.m. on July 8. The meet will kick off at 8 a.m. with the boys and girls 3200-meter run. Other events will follow on a rolling schedule.