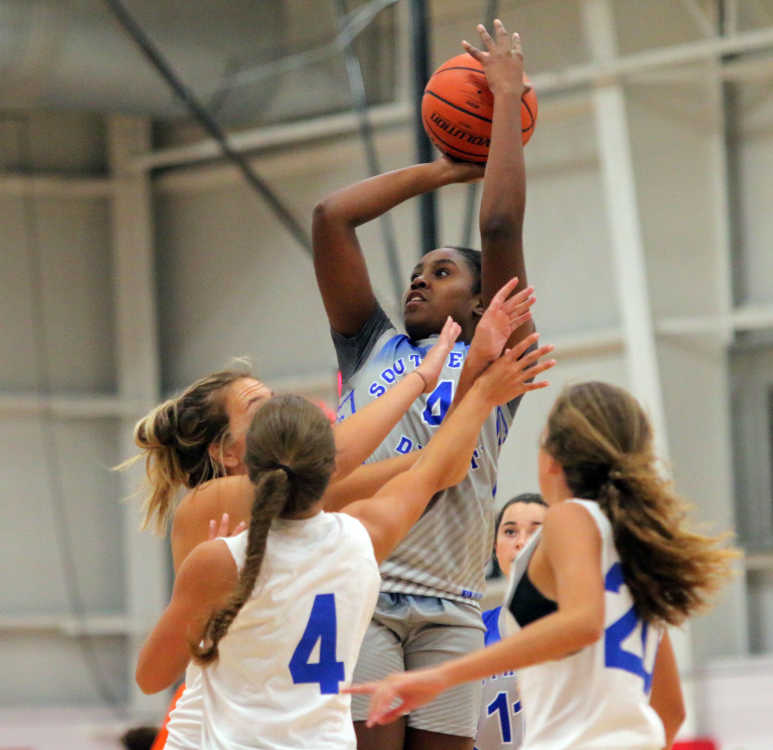 In June, a summer league started at the Cape Girardeau SportsPlex and continues every Thursday night at the venue until July 9. Sikeston’s Karris Allen and Oran’s Katie Webb and Grace Davis, among others, all play on select teams and have bettered themselves as a result.

The 5-foot-10 junior to be, Allen had a great sophomore season for the Lady Bulldogs. She averaged 15.6 points per game, 8.6 rebounds and 4.7 assists per game while shooting 45.8 percent from the floor.

Additionally, Allen swatted nearly two shots per contest, stole 4.7 passes per game and has picked up right where she left off with her Southeast Dynasty summer team.

“This offseason, I’ve been working on becoming a more vocal leader,” Allen said. “I am also working on including my teammates more by passing the ball. I have seen improvements in my overall game.”

Last weekend (June 20-21), Allen and her team played in a tournament in Indianapolis, Ind., where she earned all-tournament team honors.

Overall, Allen said that the earning that recognition was important to her because it showed that all of her hard work was indeed paying off and that she is becoming a more well-rounded player as well.

The Dynasty isn't the only team that Daigger plays for this summer, though, as she also suits up for the Kelly Lady Hawks varsity summer team and acknowledges that playing for two teams is a huge blessing to her.

“I don’t like to take time off in the off-season because it’s my time to get better and work on weaknesses,” Daigger said. “Playing for two teams has allowed me to have workouts at least five days a week, not counting open gyms for school. It has also allowed me to have multiple coaches working with me and seeing my game from different views to help me see what I need to work on.”

Webb had a breakout season for the Lady Eagles in her junior season, as she finished with 15.4 point and 7.8 rebound per game averages to earn Class 2 All-State honors.

The 6-foot-1 center controls the paint for Oran during her high school season and said that she’s been working mostly on agility and speed during the offseason.

Typically playing with the TC Hoops junior varsity team, Davis played up with the varsity roster in Indianapolis.

Already having some familiarity, by playing with Webb, the sophomore guard said that she also likes playing with players that she doesn’t regularly play with because it makes her better and strengthens her game.

“Playing with different players is like playing against another team, but you bring them into practice,” Davis said. “So, you get to play with them in practice and then you get to know them and learn how other players play around; you get used to playing with players from all around and gain a lot of knowledge, I guess.”

Davis averaged five points and five rebounds per game for Oran last season. She also shot 46 percent from the field.

Saxony Lutheran senior-to-be Maddox Murphy currently plays with Webb on the TC Hoops varsity team and also played with Davis over the weekend in Indianapolis.

Murphy added to Davis’ response by saying that seeing different styles and coaching tactics helps her, especially when she is switching to a role that she hasn’t played before in the upcoming campaign.

“I’m going to see different competition every year, so it helps me learn throughout scrimmages on everything I need to work on,” Murphy said. “Last season, I was more of a spot-up shooter and this season, I’ve been working on going to the basket and creating shots for other people, as well as myself. I’m going to be a point guard this year and that’s a new role for me.”