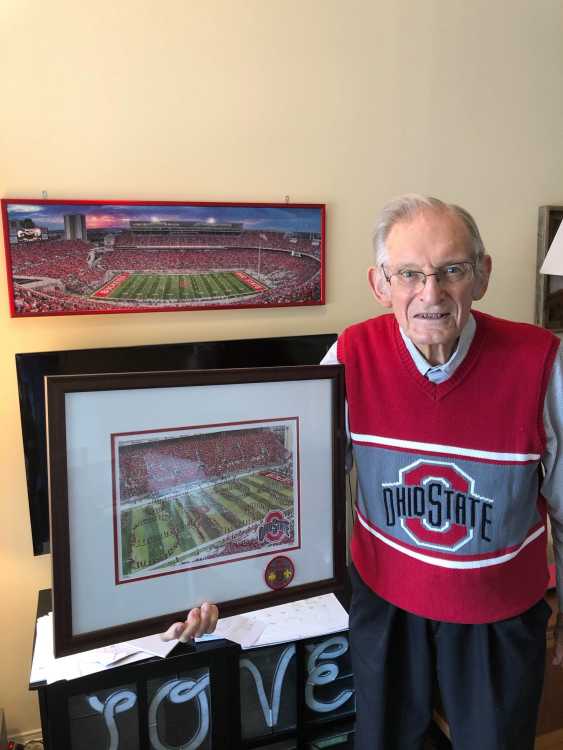 During this time of social distancing, the SuperFan series of articles focuses on fans who are geographically distant from the teams they support, who are fiercely loyal to a team outside the state of Missouri. Responses are edited for clarity and brevity.

Today: Jim Stricker, 92, Ohio State alum who was a percussionist in the Buckeyes band as an undergraduate in the late 1940s and early 1950s. Betty, his college sweetheart, to whom he was married 67 years, passed away in March. A U.S. Army veteran, Jim served in Germany and in Ft. Hood, Texas. He and Betty were missionaries to Nepal from 1979-81. Jim was CEO of Southeast Hospital for a decade. For the past seven years, he has resided at Chateau Girardeau.

A highlight of Ohio State home games is watching a band member dot the ‘i” in Ohio, when the entire band spells out the word “Ohio” on the field. As an OSU band member, did you ever get to do that?

Only in my dreams. You’re talking about “Script Ohio” and it usually happens at halftime. The honor usually goes to a sousaphone player. (Former OSU coach) Woody Hayes did it once. Last year, a 100-year old trumpeter got to do it.

You are an Ohio native.

I was born in Cincinnati, moved to Toledo as a child and then our family moved to Bexley, part of the Columbus metro area at age 11.

You have a distinct memory of Toledo.

Ohio State would play Michigan in Ann Arbor every other year, which they still do. When they came north to play the Wolverines, the team and the band would stay overnight on the Ohio side of the Ohio-Michigan line – and Toledo is right on the border. My dad and I used to watch the band rehearse. Also, I recall a March of Dimes rally in Toledo in the late 1930s. President Franklin Roosevelt was there, and Kate Smith sang “God Bless America.” It was in Toledo that my parents got me a snare drum for my birthday.

How many years did you play in the OSU band?

You mean “the best damn band in the land?” Three years but only for two football seasons. It was a 120-piece group and only 10 of us were drummers.

Some of us recall the so-called “Border War,” when OSU’s Woody Hayes and Michigan’s Bo Schembechler were opposing coaches.

The fever was really high every year in Toledo when it came time to play Michigan, I remember, but it was in the ‘30s and I wasn’t paying a lot of attention. I was pretty young.

Hopalong Cassidy. I saw him play in the ‘40s.

Woody Hayes, of course. Our family bought a house in Upper Arlington, a Columbus suburb, and we lived right across the street. I never saw Woody at home. Not once. Up early and gone and he came home late. He taught history at OSU and was an expert in the Civil War. I remember seeing Coach at a restaurant in town, though.

Other OSU coaches you liked?

The aquatics program, yes, but I was never much interested in basketball.

It was a Michigan game in either 1949 or 1950. It was a “snow bowl.” It snowed like crazy and it was hard to see the field, but we stayed for the whole thing. A lot of people didn’t because the conditions were bad that day. I also got to the Rose Bowl once in California once with my father.

What do you think about the NCAA’s decision to allow players to endorse products?

It was inevitable. I remember when players got cars and apartments to live in – and I hated that. If the NCAA is going to allow this, every player should benefit from endorsements, not just the stars.

How do you let people at Chateau know you’re an Ohio State fan?

Right now it’s hard because the safety protocols are in place to keep us safe during the pandemic. But on Saturday game days, I can be found in my OSU sweater. I like to share with people my love of the university.