Good Sports: Justin McMullen and his love of the game 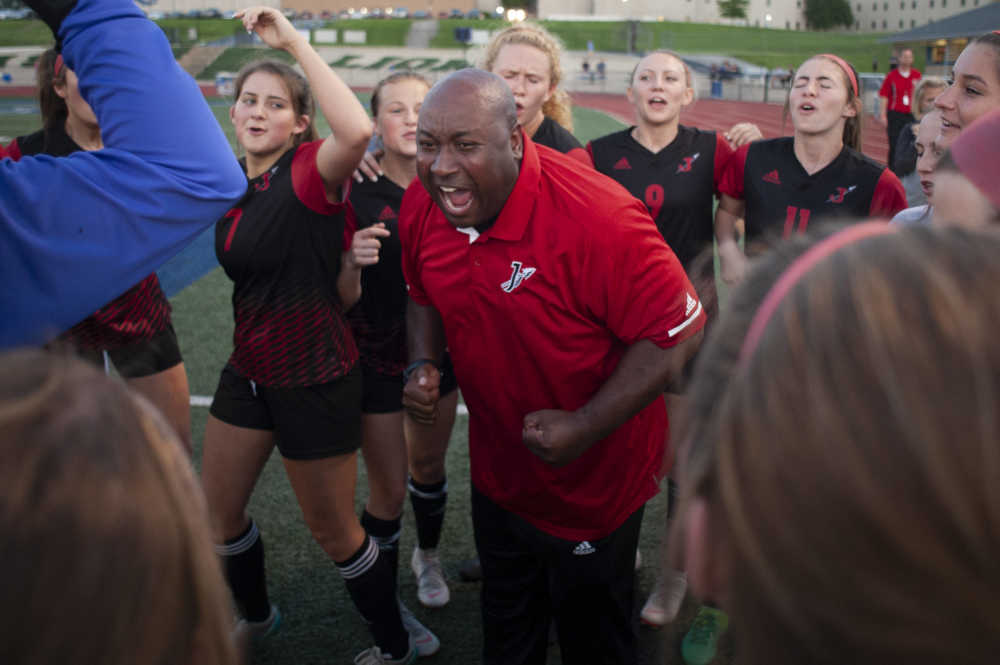 Today: Justin McMullen, 39, head coach, girls soccer, Jackson High School. A 1999 graduate of Cape Central and a 2005 alum of Southeast Missouri State, McMullen has spent his entire professional career at JHS. In his 12 years as Indians head coach, he has compiled a 194-49-4 record, leading his team to the Class 4 Final Four in 2018. McMullen’s squads have posted district championships in 2009, ’10, ’15, ’17, ‘18 and ’19. He was also co-coach of Lady Indians soccer in 2008 with Julie Wunderlich. In addition to his public school role, McMullen also coached a traveling Southeast Missouri soccer club for 17 years and considers Southeast Missouri State coaches Heather and Paul Nelson as mentors. As was the case for all spring sports, the 2020 JHS soccer season was lost to the pandemic.

You went to Central and you now coach for the Tigers’ most enduring rival, Jackson. How does that work?

I’m asked this a lot. My answer is I root for Cape in every sport so long as they’re not playing Jackson.

You played the sport yourself.

Yes, at Central and later at Fontbonne University, where I attended for a year. I transferred down to SEMO, which doesn’t have the sport for men. But I kept close to the game by helping coach the traveling soccer club. While at Central, I started in goal and then became primarily a defensive midfielder. I had to give up football because those sports occupy the same season. I played some baseball, too, as a child.

You’ve had considerable success in your tenure. What’s your secret?

It’s real simple: players with the (necessary) work ethic, the coaches around me, and great parents, community and school system.

You won’t take credit, so what kind of soccer do you like to play – end to end, which tends to be more exciting for the fan to watch, or do you prefer a field position game?

Coach (Caleb) Beussink, my assistant, works with me to decide. It depends on personnel and our formation changes every year with graduations and so forth. Casey Taylor, a former player for me, also is on the staff. Montana Krause is my newest assistant. We don’t have a lot of girls who play in the offseason as they often do, for example, in St. Louis.

I pride myself in getting to know each kid, getting the best out of her, and not just tell the athlete, “It’s my way.” I’m a big UConn women’s basketball fan. Their coach, Geno Auriemma, gets the best players he can and helps them understand their roles on the team. In fact, about half my team also plays Indians basketball for Coach (Tyler) Abernathy. Tyler and I have a good relationship.

Staying on this topic, MSHSAA (Missouri State High School Activities Association) says it is seeing a trend toward single-sport specialization. Do you think it’s a good idea for a girl or a boy to drill down on a single high school sport?

Maybe as a senior, if they want to play in college, then maybe. But until 12th grade, I like to see student-athletes play multiple sports. My girls who play basketball use different muscle groups in that sport than in mine. You use different muscles, you minimize the risk of overtraining and wearing down. Also, it’s important for a teenager to understand another coach’s philosophy. 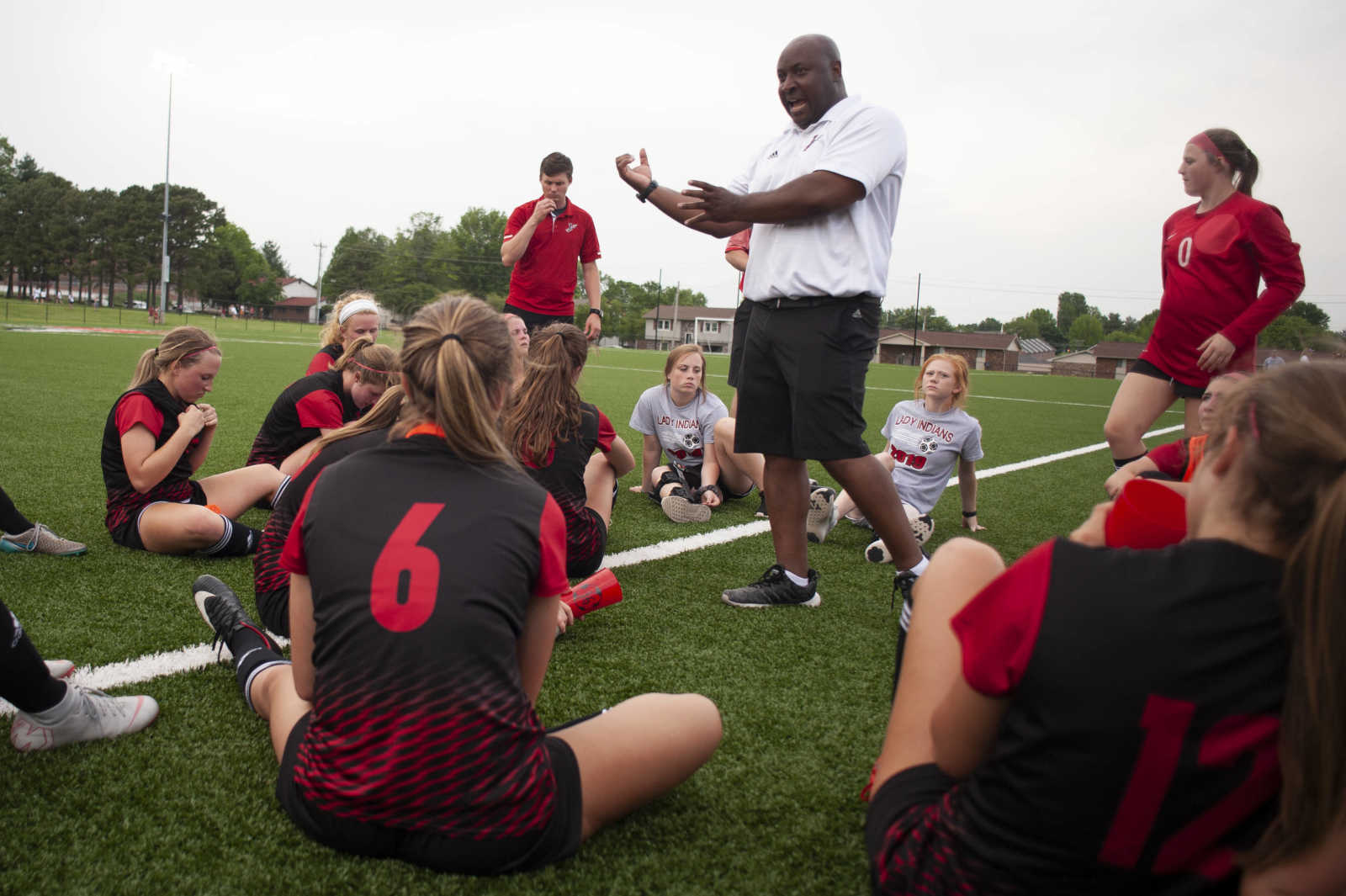 Jackson head coach Justin McMullen speaks to the team during the Indians' 2-1 overtime loss to Lindbergh High School in the Class 4 sectionals May 21, 2019, in Jackson. Southeast Missourian

What’s your best moment in your 12 years as solo head coach of JHS?

This may surprise you but the best for me is the first day of spring practice every year. I still get jitters. So, I’d point to that rather than a regular season or playoff game.

Goalkeeper, without a doubt. If you’re a keeper and a ball gets past you, it may be the difference between winning and losing. Your one moment may be the deciding factor and that’s difficult mentally. You must be brave to be in goal. Consequently, it’s hard to find keepers. Some years it’s a little bit like finding a needle in a haystack.

Best players on the pitch for Jackson in your tenure?

The best ones are the players who make their teammates better and I’d have to say Lauren Welker (2018 Southeast Missourian Player of the Year) definitely qualifies. She was special. I’d also mention Bobbi Jo Schlick, Chelsey Dale and Cassidi Tomsu.

Anybody on the U.S. national team, either now or in the past, whom you admire?

Carli Lloyd is an older player who understands her role and does a lot of things which go unnoticed. I’d also mention Alex Morgan and Mia Hamm.

COVID shut down your spring 2020 season.

Yes, the girls came in for a meeting and team pictures and we knew at that time the chances of playing were not good. We had three seniors (Piper Guilliams, Cameron Pieper and Elizabeth Snyder). I’d happy to say everybody will get to play one more time later this week. JHS is hosting a five-team exhibition that we’re calling “SEMO Friendlies.” The other four schools are Farmington, Notre Dame, Poplar Bluff and Saxony Lutheran. It’ll be held Thursday and Friday.

I was raised by my grandmother, who died during my senior year at Central. I’m not married and don’t have children of my own, and I think of any kid who walks down the halls at Jackson is my kid if I coached her. I see lots of people around me as family. Soccer and the idea of family connect very closely.

Is it fair to say there aren’t a significant number of African American soccer coaches?

Very fair. I look forward to the day when it becomes standard for someone to refer to me as the girls soccer coach at Jackson and not the black guy who coaches soccer.

I would be remiss not to ask you about your reaction to George Floyd’s death and what has transpired since his May 25th slaying.

I don’t agree with the rioting. If we want change, we make it the way we talk to our kids. We tell them to make sure to judge people on their character and how they treat one another. We should have unity in the United States because we’ve been divided.

What’s a life philosophy you’d like to impart to young people?

Stay humble, taking nothing for granted and be grateful.