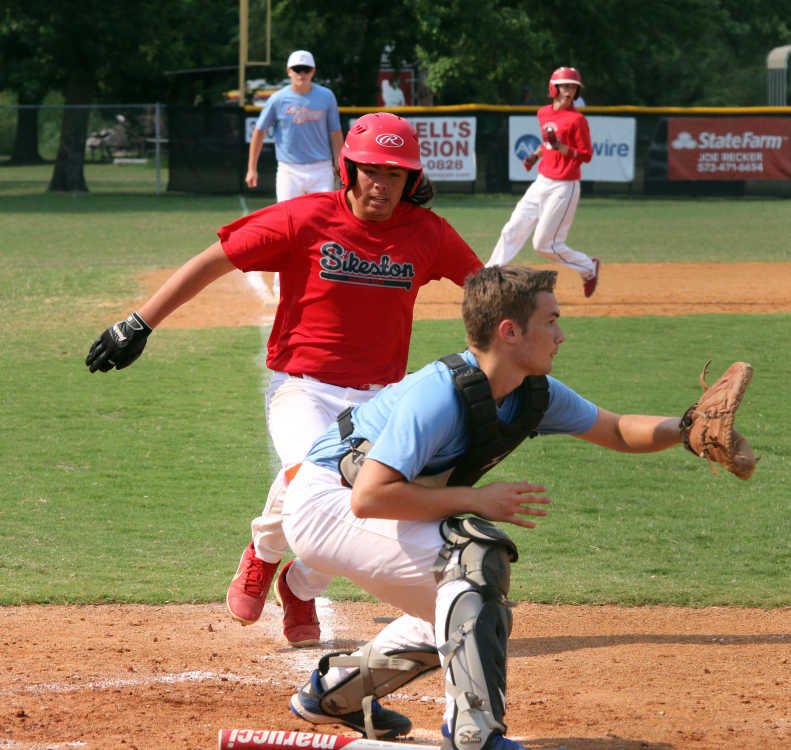 Sikeston Silver Sox Omar Martinez tries to score a run, against the Southeast Tropics, on the first day of pool play of the SEMO Challenger Tournament, on Thursday, June 19, 2020, at VFW Stadium.
Alex Wallner/Standard Democrat

SIKESTON — For the second year, a belt is up for grabs, as pool play started for the Southeast Missouri Challenger Tournament Thursday afternoon at VFW Stadium.

Six teams make up the tournament and after the first night of pool play, Sikeston Silver Sox general manager Craig Templeton is looking forward to the weekend.

“We’re very excited about the tournament and to be able to have it,” Templeton said. “Last year, it was rained out and with the times, we feel that it’s very important to give back and this is something we can do. We explain to the kids what this means and a lot of these kids; they don’t understand the disadvantages for the Challenger kids. They see the championship belt and ask questions and it’s a good topic for us to explain what these kids are up against — this is just portions of what we can give them.”

A seven-run third inning propelled the 15-and-under Southeast Tropics to a 9-2 victory over the 17-and-under Sikeston Silver Sox in the first game of the event.

The inning started just how the Tropics wanted, as the first three batters of the frame all reached base safely. Tyler Davis drew a walk, Drew Klipfel muscled a single and Reece Eftink drew a walk of his own to load the bases for Oran’s Connor Kern.

With Kern at the plate, the Tropics starting pitcher worked a 2-2 count, and on the sixth pitch that he saw, created the first run of the game. He hit the ball to Sikeston’s shortstop, but instead of a double play or forceout, everyone wound up safe, as Davis scored and the bases remained loaded.

Back-to-back walks by Collin Blaylock and Levi McKinnie then pushed two more runs across for the Tropics, as they led 3-0 and still no one out.

Then, after a strikeout to Seger Ruiz, Kern scored — with Luke Holder batting — on a passed ball, to make it 4-0

Joe Cook followed up with a base hit that plated two more runs, making it 6-0 and as the Tropics batted around in the order, Davis hit a single of his own to score the seventh — and final — run of the frame.

After a big third inning busted the game open for the Tropics, they didn’t stop there.

In the very next frame, Eftink provided one of the most unlikely RBIs in the game, as he hit an inside-the-park home run, giving the Tropics an 8-0 lead.

On the second pitch he saw, Eftink laced a pitch to center field and turned on the wheels as he rounded second base to the 15-and-under head coach Chris Asmus waving him around third.

As he was rounding, Eftink noticed the ball traveling in his direction and slid home, to a pair of teammates congratulating him.

That round-tripper was Eftink’s one-and-only hit of the game, as he finished 1-for-2, with two runs scored.

Cook led the Tropics with three RBIs and went 1-for-3 in the afternoon.

On the mound, Kern pitched 3 2/3 innings, giving up no runs or hits, striking out five batters and walking two. He also picked up the win.

Some late-inning heroics was the difference for the 18-and-under Charleston Fighting Squirrels on Thursday.

Trailing 4-2 and three outs left to work with, the Fighting Squirrels scored three runs in the bottom half of the seventh to earn a 5-4 win over the 17-and-under Jackson Tribe.

Dawson Duckworth led off the rally with a single, while Spencer Stratman drew a walk to put runners on first and second.

A costly error by Jackson’s hurler would push both runners into scoring position, before a hard-hit single by Chase Sirabia pushed Duckworth across to make it a one-run contest.

Seth Jones followed that up by drawing a walk to load the bases, while the third free pass of the frame tied the game at four.

With a chance to win the game on his home field, Sikeston’s Dylan Thornbrough did not pass up that opportunity, as he hit a sacrifice fly to center field — scoring Sarabia — on the second pitch that he saw of the at-bat.

Thornbrough finished with two RBIs — leading the team in that regard — and went 1-for-3 at the plate.

Duckworth paced the way for Charleston, in hits, with two, while Sarabia’s two runs scored that the team in that category.