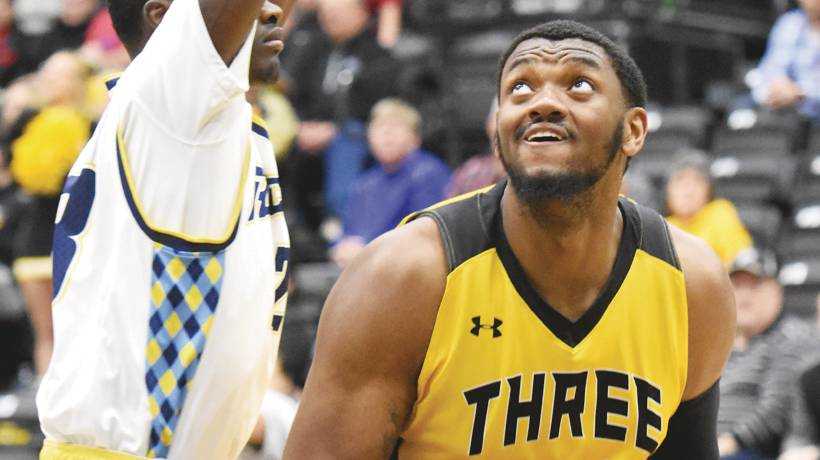 Three Rivers sophomore Lydell Geffrard posts up during a game in this Nov. 28, 2019 photo at the Libla Family Sports Complex.
DAR FILE/Scott Borkgren
Order this photo

Three Rivers’ Lydell Geffrard is going to Division I.

Geffrard announced Wednesday morning that he had signed with Troy University after the redshirt sophomore spent one season with the Raiders.

“I would like to thank the man above God himself for blessing me continuously and knowing that if it wasn’t for him I wouldn’t be in the position I am in right now!” Geffrard announced via Twitter. “I want to give a shout out and appreciation to coach Steve Lowry, coach Chuck Alston, coach Tremayne Singletary and Three Rivers for helping throughout this process.” 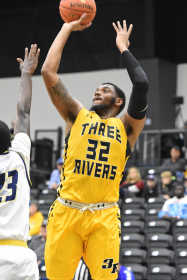 Lydell Geffrard shoots over a defender in this Nov. 28, 2019 photo at the Libla Family Sports Complex in Poplar Bluff, Mo.
DAR FILE/Scott Borkgren
Order this photo

“We felt like he had a pretty good year for us,” Three Rivers coach Brian Bess said. “We were excited about (Geffrard signing with Troy). We thought he was a Division I player.”

In a statement released by Troy University, Troy coach Scott Cross said, “He really impressed our staff with his ability to pass the ball and score with his back to the basket. However, the thing that we like the most, is that ‘Dell is a very high character person that fits our culture.”

Geffrard was a consistent threat inside for Three Rivers. In seven games, Geffrard scored at least 10 points and grabbed at least eight rebounds, and the Raiders went 5-2 in those games. The two losses were by a combined five points, including a one-point loss at Mineral Area in which the Cardinals made a 3-pointer just before the buzzer to win.

He had one double-double when he got 11 rebounds and 11 points on 5 for 7 shooting in an 88-84 home win against MSU-West Plains. He scored a season-high 19 points against Southern Arkansas University Tech and also had eight rebounds in that game.

“He can really help a team because he is big and strong. I thought he even handled the ball pretty well for us,” said Bess, who added that Geffrard had a lot of interest from Division I schools. “We probably missed him in the postseason because he was injured at the end of the year, but we still gave Moberly a pretty good run.”

Geffrard missed the final six games of the season with a foot injury he suffered in the opening minutes of a win against St. Louis on Feb. 4. The Raiders closed the regular season with a 4-1 record, including a forfeit by Arkansas Baptist, to get coach Gene Bess, who announced his retirement in May, to 1,300 wins during his 50-year career at Three Rivers.

Despite not having Geffrard in the Region XVI semifinal, the Raiders pushed Moberly Area for much of the game before losing 86-79. In the regular season, the Raiders lost to the Greyhounds by 35 and 28 points.

Geffrard came off the bench at the beginning of the season and scored two points in the season-opener against Link Year Prep and five points the next day against Wabash Valley. He made one shot in each of the comfortable wins.

He got his first start the next game against Indian Hills and finished with 10 points and five rebounds to lead the team in both categories. He scored at least six points in every game the rest of the season and started all but once when played 28 minutes off the bench and led the Raiders with 12 points and eight rebounds in that heartbreaking loss at Mineral Area.