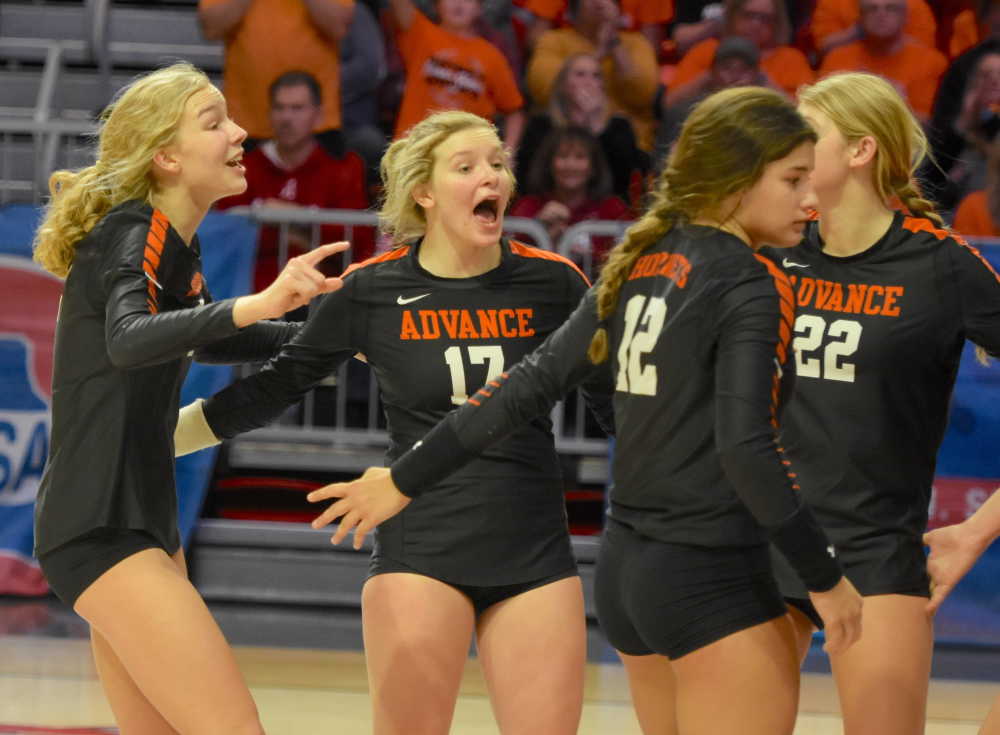 From left, Advance's Nyah Wilson, Meadow Morse, Alandry Below and Alyssa Massa celebrate a point during the first set of the MSHSAA Class 1 volleyball championship match Nov. 9, 2019, at the Show Me Center in Cape Girardeau.
DEXTER STATESMAN/Kyle Smith

ADVANCE — The Advance volleyball team has begun preparation for its quest to win a third straight state championship.

The Hornets began lifting weights and holding practices during the first week of June.

“Everybody’s pretty motivated,” senior hitter Alyssa Miles said. “We’re all trying our hardest to get along. We’re working a little harder than in previous years.”

Schrader was the team’s go-to player the past two seasons, leading the team with 317 kills, 81 total blocks and a .461 hitting percentage in 2019.

“I think she was kind of our comfort player,” sixth-year coach Erin Hoffman said. “We knew she was most likely going to get the ball in and most of the time it would be a kill. The big thing we got from her was her blocking. This year, we’ve still got plenty of hitters. The toughest part of replacing her is going to be her blocking.”

Hitters Miles (244 kills last season), Meadow Morse (142) and Nyah Wilson (198) remain from the 2017 district championship team, and all played a hand in the first state championship season in 2018. Miles and Wilson were major contributors as freshmen.

“It’s going to be kind of hard to come back, but I think we can do it because we have a lot of juniors who became seniors this year,” Miles said. “I think there are a lot of us who work really well together. I think we can make it happen again.”

Junior setter Alandry Below is another returning starter. Below stepped into all-stater Addie Curtis’ role last season, and the Hornets didn’t appear to miss a beat. She finished with 773 assists.

Miles feels comfortable with Below directing the offense.

“We have an outstanding setter who has been with us for both state championships, and she’s been helping out a ton,” Miles said. “Everyone is having good attitudes. We just work really well together.”

While the players believe a third straight state championship is possible, some outside the locker room have their doubts because of the absence of Schrader.

“Prove people wrong,” Wilson said of the upcoming season. “(It) gives everyone else a chance because last year it was like she was a big hitter, our star hitter. So now it’s like this year, everyone’s got a chance to show what they’ve got.”

A factor in the team’s recent run of success is avoiding major roster turnover. Curtis and libero Katlyn Cook graduated from the first state championship team, and Schrader and Massa from the second.

“That’s the best part about it,” Wilson said of her class’ early success. “We were all really young. We were all sophomores when we won the first one. That helped a lot.”

The Hornets feature seven seniors this season — the most since they had five in 2016. Some of them split time between the varsity and junior varsity squads last season because of low numbers among the underclassmen.

“This group has worked hard for me since the seventh grade when I first got here,” Hoffman said. “They showed up to absolutely everything for the past five years.”

The other seniors are Chloe LaRue, Danielle Markham, Jadeyn Metcalf and Mikayla Mikels.

Besides lifting and practices, the Hornets have two shootouts scheduled this summer and plan a team-bonding outing, according to Miles.

The Hornets, and all fall sports teams, will begin practice Aug. 10, and they will open their season at Richland on Sept. 4.