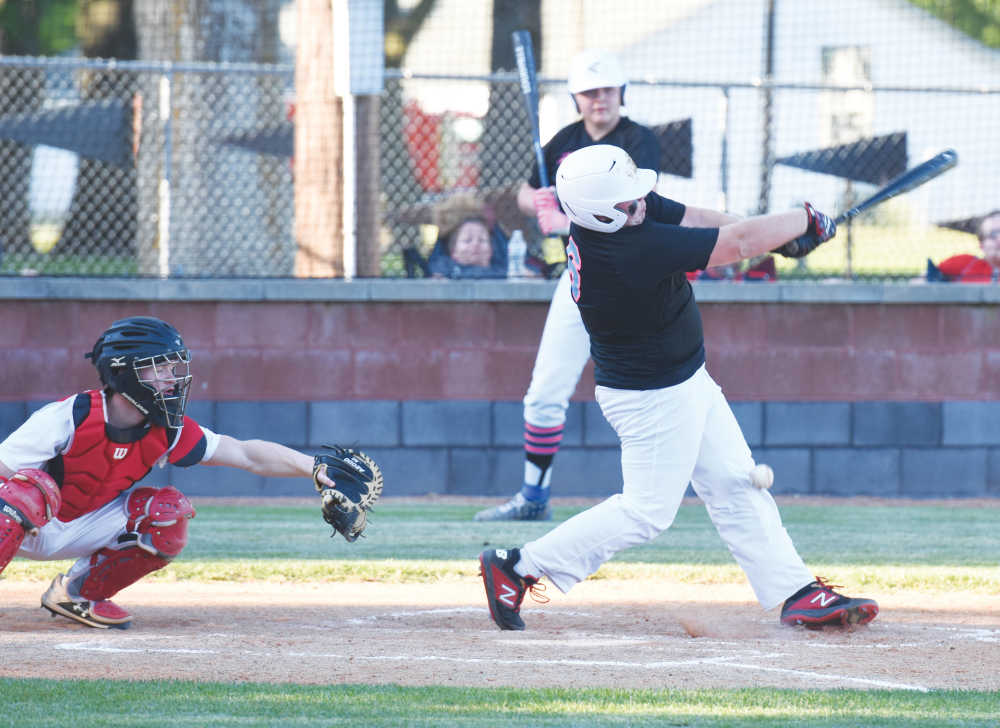 The Southeast Tropics’ Jack Duenne, of Bell City, fouls a pitch off his leg in front of SEMO Spartans catcher Mason Keena during the second inning Monday, June 15, 2020, at East Park in Dexter.
DEXTER STATESMAN/Kyle Smith

The Spartans lost for the first time this season, falling to 1-1-1.

The Tropics’ 17-and-under squad capitalized on four errors in the opening two innings by the Dexter-based team, scoring eight unearned runs to take a nine-run lead.

The Tropics took a 3-0 lead in the top of the first, and Riley Slusher and Peyton Driskill hit back-to-back, one-out singles in the bottom of the first to slice the lead to 3-2.

In the second, the Tropics erupted for eight runs to take an 11-2 lead. They strung together four hits and took advantage of three walks, three errors and one passed ball by the host squad.

The Spartans kept applying the pressure offensively in the bottom of the second. The first six batters reached base, including a run-scoring single by Garrett Henson and a run-scoring fielder’s choice grounder by Camden Riley.

However, the Spartans lost a runner on the basepaths on a crazy play that involved multiple throws around the diamond, taking them out of a big inning.

The Tropics added three runs in the third, two in the fourth on a two-run homer by Nazavenus and one in the fifth on a wild pitch.

The Spartans scored a run in the third when Carson Bell drew a leadoff walk, moved to second on a sacrifice bunt by Eli Ford, advanced to third on a bases-loaded walk by Landon Henson and scored on a wild pitch.

Hillis singled home a run in the fifth.

Brandon Palmer picked up the win, allowing four runs on four hits with one strikeout and three walks in two innings.

Hillis was charged with the loss, yielding 10 runs — three earned — on five hits with two strikeouts and five walks in 1 2/3 innings.

Duenne and Nate Stone, both of Bell City, each doubled and drove in a run for the Tropics in the third inning.

Garrett Henson went 2 for 4 to lead the Spartans’ seven-hit attack.