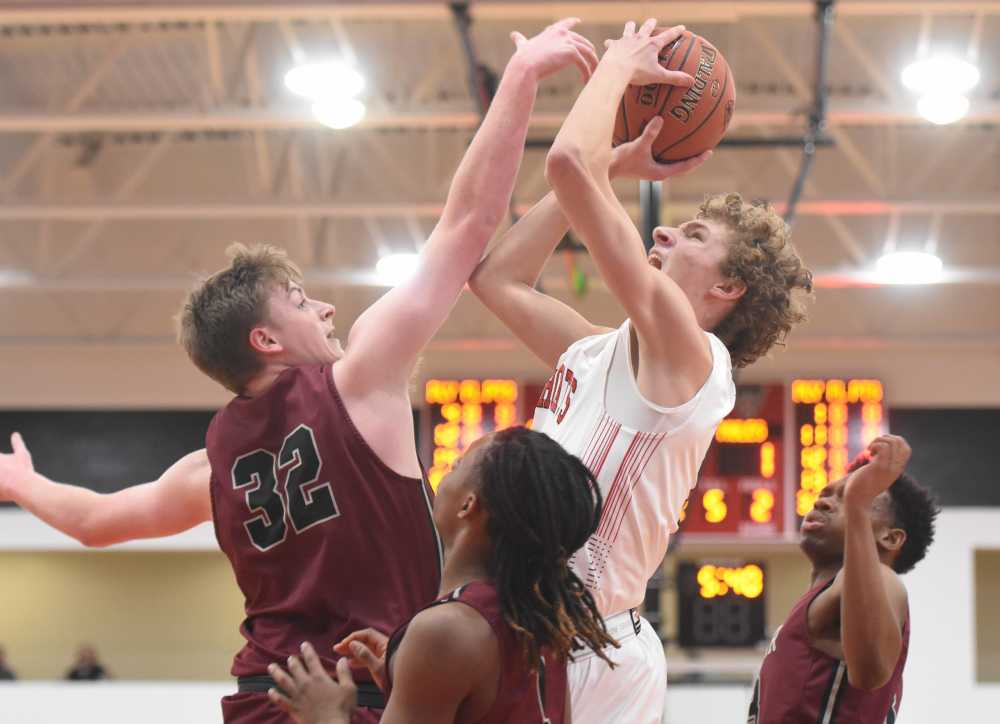 Poplar Bluff's Luke Becker (left) gets a hand in the face of Dexter's Andrew Ellinghouse on Tuesday, Feb. 18, 2020, at the Bearcat Event Center. Ellinghouse scored a game-high 22 points in the Bearcats' 70-61 win.
DEXTER STATESMAN/Kyle Smith

The Dexter Statesman is counting down the 10 best high school games from the previous school year. We will feature a game each week. The criteria for a game to make the list include competitiveness and meaning of the game. A game must involve a team(s) from Stoddard County and must have been covered first-hand by the Statesman or Semoball.

NO. 9: After some narrow misses, the Bearcats secured their only SEMO Conference win of the season, holding off Poplar Bluff in the fourth quarter. Three of their seven conference losses were by two or fewer points.

Four nights after watching a 14-point fourth-quarter deficit disappear in a loss to Kennett, the Dexter boys basketball team proved it could close out a game Tuesday, Feb. 18.

The Bearcats made 15 of 19 free throws in the fourth quarter and beat Poplar Bluff 70-61 to win their first SEMO Conference game of the season.

“Poplar Bluff really got after us defensively late in the game,” Dexter coach Chad Allen said. “We handled it so much better than we did against Kennett the other night. That’s what we needed. We needed a game like this — to be able to pull it out at the end and handle that pressure.”

Mules coach William Durden said his team fouled too much.

“We struggled from the free throw line all game long,” Allen said. “Down the stretch, guys stepped up and hit some huge free throws to really put it away. To me that’s one of the big things we did extremely well late in the game was make free throws and not turn it over as much.”

The Mules trailed by as many as 14 points in the third quarter but cut Dexter’s lead to 52-48 on a 3-pointer by Chance Campbell early in the fourth.

Dexter pushed its lead back to nine when Andrew Ellinghouse converted a 3-point play and made two free throws on a technical foul called against the Mules’ bench.

The Bearcats extended the lead to as many as 11 (63-52) when Ellinghouse finished under the basket following a turnover.

Campbell made another 3 with about 30 seconds remaining to slice his team’s deficit to 66-61, but Cole Nichols went 4 for 4 from the free throw line in the final 27.2 seconds to seal the win.

Ellinghouse finished with a game-high 22 points and played a major role on the boards.

“The big thing, they killed us on the offensive glass,” Durden said. “I don’t know how may Ellinghouse had, but every time they missed a shot, he went in there and got a rebound. We can’t do stuff like that and expect to win the game.”

Garrett Henson finished with 14 points before fouling out with 2:48 to play, and Nichols added 13, going 8 for 10 from the foul stripe.

Joseph Hardimon paced the Mules with 14 points. He was the only Bluff player to score in double figures. Campbell came close with nine and Jeridon Young had eight.

Turnovers proved costly for the Mules in the first half. They committed six in the first quarter and seven more in the second.

“We couldn’t stop it,” Durden said. “We called a timeout and came right out and turned the ball over again. It’s probably a little bit to do with the other team. I mean, they played hard. I thought they played harder than we did. We didn’t handle adversity very well.”

Dexter shot out to an 11-3 behind 3-pointers by Jackson Allen and Nichols and held the Mules to no field goals for the game’s first 4:45. They scored their first five points from the free throw line, slicing the lead to 11-5 on a pair of Luke Becker.

Darion Combs sank a 3-pointer to cut the lead to four (17-13) and Hardimon sliced the lead to two after he made a jumper while hanging in the air above the lane at the buzzer.

The Mules committed three early turnovers, allowing Dexter to pad its lead in the third. Henson scored five of those seven points.

The Mules limited their turnovers afterward and sliced the lead to six (49-43) on a turnaround jumper and a free throw by Kendrick Brown. Ellinghouse sank two free throws, giving the Bearcats a 51-43 lead going to the four