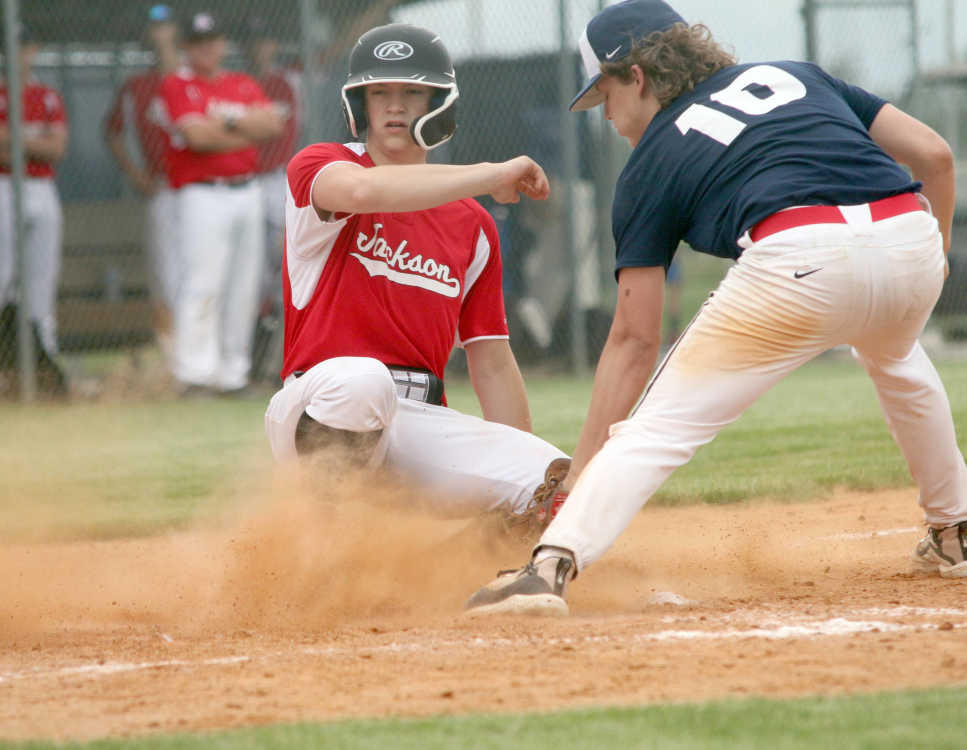 JACKSON, Mo. — Pitching had its share of struggles for the Sikeston Silver Sox on Wednesday against Jackson.

Two hurlers had an appearance on the mound for the guests, with both wanting to have the game back. Sikeston pitchers gave up 10 earned runs, 14 hits, and threw three wild pitches in its 10-0 loss in five innings to the Tribe, at Saxony Lutheran High School.

Joe Miles started the game for Sikeston and, in the beginning, started well.

After giving up a single to Tanner King, in the first, he came right back and struck out Blaise Winder to end the inning.

Then, in the second, Miles allowed a leadoff walk to Cecil Abernathy but followed that up by getting Seth Spraggs to line out to center field and Layne Frederich to line out to third base, which then turned into a double play, to end the side.

Sikeston only mustered four hits in the game, with two coming in the top of the third inning, which was the Silver Sox’s best opportunity to capitalize and score.

Jackson’s starter Alex Meyer got off to an excellent start to the frame, as he struck out Justin Marks and Lawson Alcorn. However, after that, Sikeston mounted a rally.

Mason Ahlvin started the rally by reaching on a base hit. Leadoff man Hayden Alcorn followed suit, with a single of his own, and Trey Drake then drew a walk to load the bases for Tyler Stokes.

Instead of crumbling, though, Meyer got Stokes to strikeout and end the threat. Sikeston didn’t come closer to leading than that moment.

“When we started putting the ball in play, making plays, getting people on, and we started advancing runners,” Sikeston head coach Josh Hampton said. “We were able to move forward with the game, but we’re still not hitting in opportune positions where we should be.”

In the next half inning, Jackson got the same sort of opportunity and capitalized by scoring four runs to take a 4-0 lead.

Kaleb Garcia and Will Ledure started the frame with back-to-back singles. An infield fly by Will Richardson then made him the first out, while Hunter Bilek got hit by a pitch to load the bases.

A two-run single by King would make it 2-0, while Winder made it 4-0 by following with a base hit of his own, and from that moment, the runs came quickly.

Jackson made it 6-0 in the next inning after Ledure reached on a double, and Richardson followed up with a home run. However, with the wind blowing in all sorts of directions, Richardson wasn’t sure if the ball cleared the fence until he noticed his coach relaying it to him as he was rounding second base.

The Tribe would then finish off the Silver Sox in the fifth inning after scoring four more runs.

Despite a late offensive outburst, Jackson head coach Mark Lewis said that even though his team didn’t get out to the start that he wanted, scoring a few runs made everything come together.

“I felt like it was OK,” said Lewis of his team’s offense. “We didn’t do a whole lot in the first couple of innings, but we cashed in, in the third, and that just relaxed us for the rest of the game. Winder had a big knock there, and there were a couple of other guys too.

“To get up four, it just seemed to relax us; we’ve played four games in the last three days, and it’s early in the year, and they didn’t play in the spring, so everything they’re getting right now is nice, but you got some sore kids right now.”