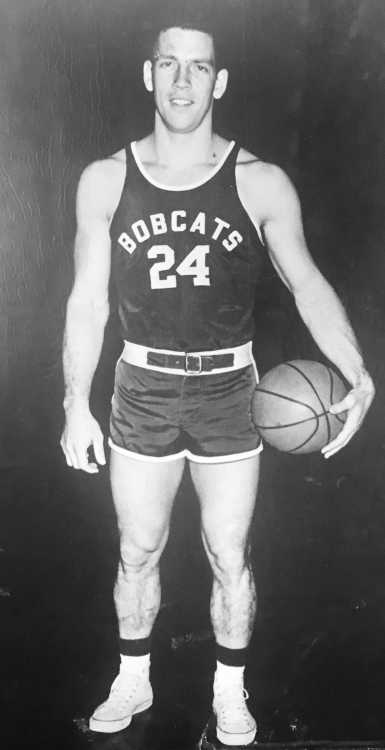 Bob Cradic played for the Williamsville High School Bobcats before moving to Poplar Bluff where he was the first all-state basketball player for the Mules in 1955. He later became the first head coach of the Three Rivers Raiders before taking over the Southeast Missouri State University men's basketball program for five years.
Photo provided

The man who gave Three Rivers the Raiders nickname and picked black and gold as the team’s colors is working in a different medium.

Bob Cradic set scoring records for the Poplar Bluff High School basketball team and was the program’s first player to earn all-state honors before playing in college. He was a high school basketball coach at Salem when a former teammate called to see if he might be interested in a new job.

Three Rivers Junior College, as it was known at the time, was starting a basketball program. 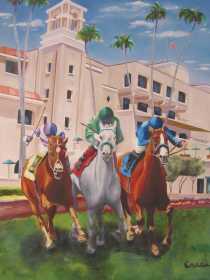 “The frightening part of it was trying to put together something from nothing,” recalled Cradic on Tuesday from his home in San Diego.

“No schedule, no uniforms, no mascot, no colors, no team history, no anything.”

The Raiders are named after the NFL team because Cradic thought the team, which at the time played in Oakland, had a mystique. The colors of black and gold was just a choice. 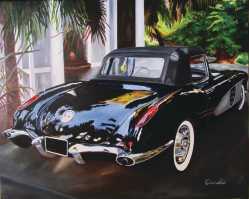 Now in retirement, Cradic is using color in other dramatic ways as a painter.

Cradic’s work can be found at the Del Mart Art Center and on his website, www.oilsbycradic.com, which features a diverse group of subject matters. His painting of the Mark Twain School hangs inside the Poplar Bluff Museum.

“My interest is pretty broad,” Cradic said. “Most painters are pretty focused. They’ll like landscapes, seascapes, portraits, still life, ect., and basically, when I see something that I think is interesting and pretty then I paint it.

“That could be anything from a flower to a day at the beach.”

“I told my wife, I said, ‘you’re going to think this is silly but I want to go down to the art studio and buy a tube of paint and a canvass and see if I can make something,” Cradic said.

“I’ve been painting ever since.”

Cradic moved from Williamsville to Poplar Bluff before his junior year and made an immediate impact for the Mules. As a senior in 1955, he averaged 21.4 points per game and helped Poplar Bluff to a 23-3 season that ended in the state tournament. His 798 points in two seasons was also a team record.

Craic returned to Missouri to teach and coach following his graduate studies at UCLA. He was hired two years later by his old Mules coach, William “Red” Haynes, at Salem. Cardic’s former teammate, Buddy Godwin, called to see if he was interested in starting the program at Three Rivers.

“It just kind of fell in place because of the local talent and because of all of the people who helped me,” Cradic said of starting the program. “The Booster Club, it was formed right away.”

Cradic said he and the team didn’t know what to expect when the program tipped off at a tournament in Oklahoma City. The Raiders led by four at halftime but lost 80-79 to Southwestern Oklahoma. They beat Weatherford (Texas) 91-77 in the second game of the tournament.

“They were a bunch of very competitive young men and I think after we won two or three games we began to believe in ourselves a little bit,” Cradic said.

With everyone able to return, Cradic said he toughened the schedule for the second year. The Raiders ended up 14-15 but beat Mineral Area in the region tournament before getting knocked out in triple-overtime 84-80 by a Jefferson team that lost by three to Moberly in the final.

Prior to the third season, Cradic got permission from H. Tudor Westover to hire a full-time assistant coach. While recruiting, Cradic saw Oran’s runner-up finish at the 1969 state tournament. He was looking at some of the players and the Eagles coach — Gene Bess.

“I liked his players, his team, the style they played,” Cradic recalls. “I thought he would be a good edition.”

A year later after a 23-7 season, Cradic took the head coaching job at Southeast Missouri State and recommended Bess to take his place.

Cradic and Bess were elected into the Poplar Bluff Sports Hall of Fame at the same time in 1983. Over his 11 seasons, Cradic career record was 170-108.

“I’ve always been grateful for the experience I had there and really appreciate the support that we got from the fans and Boosters,” Cradic said.

Cradic’s teams at Southeast went 76-71 over five seasons before he changed careers. He went into construction for seven years until he and his wife Deanna visited San Diego as part of a vacation. Six months later they sold the home and business and moved to California.

Deanna (Mussell) and Bob have been married 59 years and have two children.

In retirement, Cradic said he played tennis a lot.

“And then I got too old to play tennis and so then I graduated to pool,” he said.

Playing three days a week at the local civic center, the competition was “extremely fierce,” Cradic said, until the COVID-19 pandemic shut everything down.

“Like everybody else we’ve been staying home and reducing the amount of trips to the grocery store,” Cradic said. “Socialization is almost zero.”

But there is time to paint.