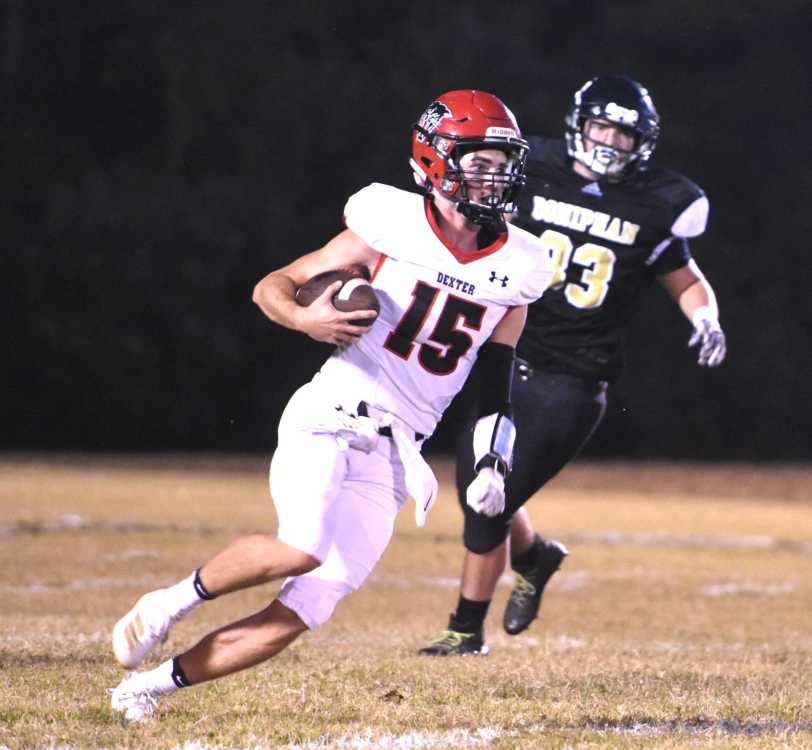 The Dexter Statesman will count down the 10 best high school games from the previous school year. We will feature a game each week starting with No. 10. The criteria for a game to make the list include competitiveness and meaning of the game. A game must involve a team(s) from Stoddard County and must have been covered first-hand by the Statesman or Semoball.

THIS WEEK: The Bearcats suffered through a challenging season, compiling a 1-8 record. The most competitive game was a 19-6 Week 2 loss to Salem. The highlight of the season, though, was a 32-0 victory over Doniphan.

DONIPHAN — The Dexter Bearcats football team won for the first time this season with a dominating performance in a 32-0 victory over the Doniphan Dons.

“It wasn’t the prettiest game in the world, but we’re very happy to get a win,” Dexter coach Aaron Pixley said. “I’m really proud of the kids. They deserve all the credit.”

The Bearcats amassed a season-high 336 total yards, while holding Doniphan to 101 Friday, Sept. 27, 2019, on Griffin Field at Brumitt Stadium.

Jordan White gained 31 of those yards on the Dons’ first play from scrimmage.

“Doniphan had two or three plays right off the bat that were really good,” Pixley said. “(They) got down near the red zone, and we just kind of dug in and started reading our keys and doing a better job of tackling. From that point on, I felt like the defensive side for us was dominant. We did a great job.”

The Bearcats had some difficulty early defending Doniphan’s double-wing offense.

“That scheme they run is very difficult to defend,” Pixley said. “You’ve got to read keys and be very, very disciplined. I thought for the most part, we did an excellent job.”

Dexter gained 217 yards rushing and 119 yards passing with quarterback Haden Hillis and Alex Townsend teaming up for a pair of first-half touchdowns.

Dexter gained 21 first downs while holding the Dons to three.

After going three-and-out on their first possession, the Bearcats began to gain traction on offense.

Dexter caught a couple of breaks on the drive. The Dons were called for a false start, giving Dexter third-and-short. Guy fumbled on the ensuing play, but the Bearcats recovered 8 yards down the field for a first and 10 at the 16.

Dexter lost 6 yards on the following two plays before Hillis connected with Townsend along the left sideline, and Townsend crossed the goal line for a 14-yard touchdown. After Jacob Medler kicked the extra point, the Bearcats led 7-0 with 3 seconds left in the opening quarter.

The Bearcats’ first possession of the second quarter began at the Doniphan 43, but the drive stalled at the 35 after they failed to convert a fourth-and-2.

Again, the Bearcats benefited from a Doniphan penalty. The Dons were called for illegal motion on second and 9, pushing them back 5 yards and halting any momentum.

Doniphan committed nine penalties for 63 yards. However, the Bearcats had only one for 10 yards two weeks after committing 10 in a 43-15 loss to New Madrid County Central.

“Week 3, we were really bad and it cost us,” Pixley said of penalties. “It was good to see that we just had one penalty. … I’m very proud of the kids. That’s discipline. That’s moving your feet. That’s staying with your blocks and not stopping your feet and holding. That right there helps your offense and defense. You’re never behind the sticks and you always have a chance to get first downs.”

Dexter’s next possession ended on an interception by Doniphan’s Alex Harris.

The Dons went three-and-out, and on the Bearcats’ next drive, Hillis and Townsend connected for a 50-yard touchdown pass with 1:20 left in the half. Medler’s extra-point kick was partially blocked.

“Seeing Haden hit some nice passes out there, a couple for touchdowns, that was big for him and big for us,” Pixley said. “If we can be more balanced, that will make our team a lot better.”

Dexter blew the game open in the fourth quarter, scoring three touchdowns. Keena scored on a 16-yard run only 6 seconds into the fourth and a 15-yard run with 9:23 left.

Taylor Condict scored on a 12-yard run to set the final score.

“Our running game tonight was inconsistent,” Pixley said, “but I think as the second half went on, I thought we got pretty good. We just kept with it, stayed with it.”

The Dons gained only 78 yards rushing on 22 carries for an average of 3.5 per carry. White rushed for a team-high 38 yards on four carries.

Three quarterbacks combined for 23 yards passing, completing five and 20 attempts. Harris did the bulk of the work, making all five completions.

The Bearcats won for the first time since the first round of the 2018 MSHSAA Class 3 District 1 tournament where they beat Ste. Genevieve 25-19 in triple overtime.